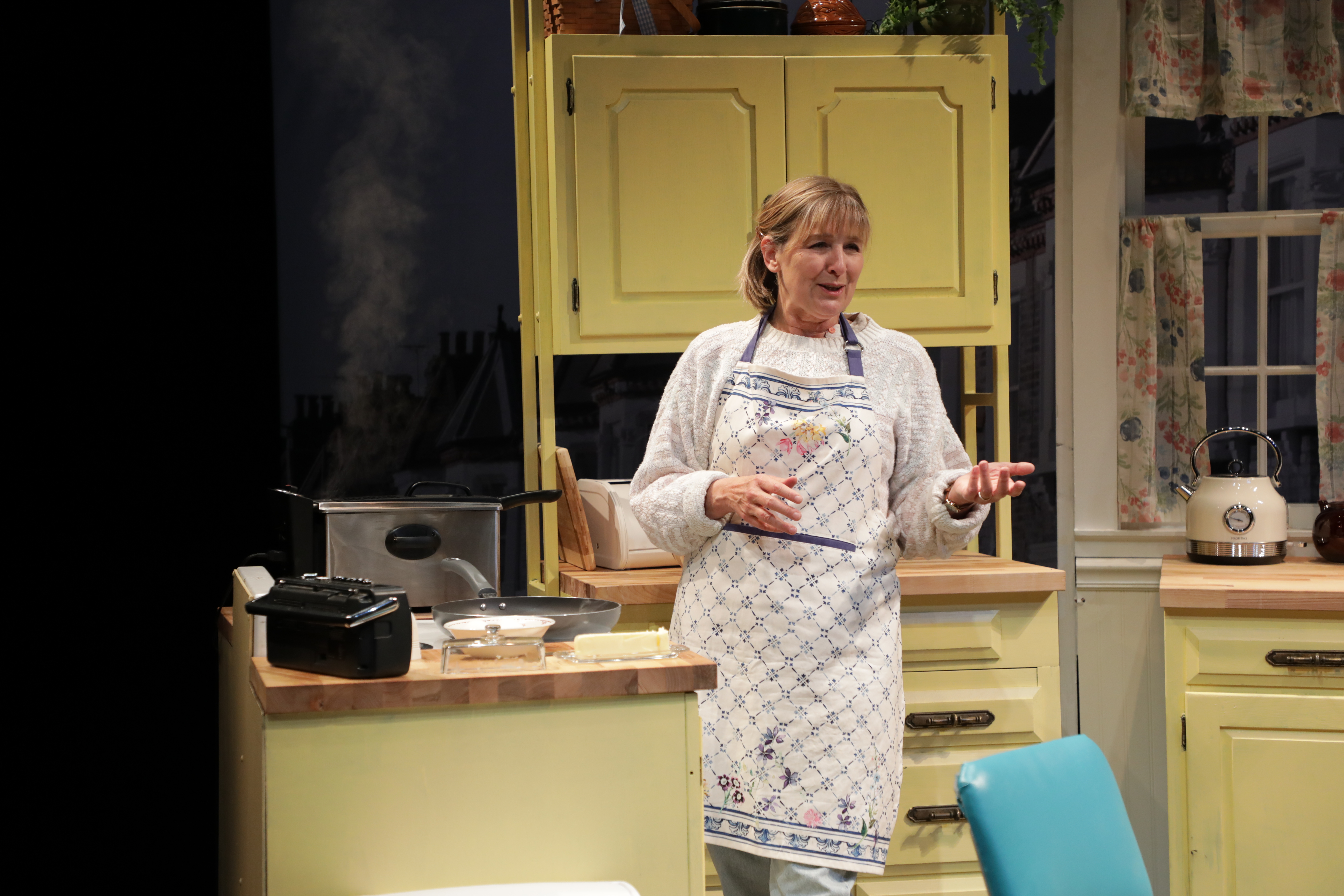 SHIRLEY VALENTINE is a one-woman comedy performed with charm, sensitivity, and great warmth by Corinna May. This play by Willy Russell is now playing at the Berkshire Theatre Group‘s Unicorn Theatre in Stockbridge and it brings us into the small, drab world of Shirley from the very first moment we enter the theatre.

Shirley is a bored, middle-aged housewife who lives in Liverpool in the 1980’s. Randall Parson’s scenic design effectively captures that world. Upon entering we see a projection of English row houses, all of a sameness. The small Unicorn stage is filled with almost all of Shirley’s diminished world—her plain buttercream-yellow kitchen, faded curtains, functional stove, fry cooker, sink and fridge. Not depressing like a Pinter basement, but mundane and probably indistinguishable from every other house on the block.

Shirley Bradshaw’s maiden name was Valentine and she was once a girl of spirit and hope and daring, but she has been beaten down by the dreary life of a wife and mother in the grey city of Liverpool. Now 40-something, with the children grown and gone, she is marooned in her kitchen—consigned to an unrelentless routine of cooking and cleaning for a husband that no longer sees her or shows her affection. Alone and frustrated, she talks to her kitchen wall as she prepares dinner for her husband—the tea must be on the table at the exact time he walks in the door, the menu is set in stone. She might be an automaton of misery, but there is still a congenial persona, a woman of humor and compassion, and just a bit of that “Valentine” spark.

As Shirley reflects on her life, she savors her glass of white wine, evidently the only source of pleasure available to her. She talks to the fourth wall, sharing with the wall (and the audience) her feelings about having a wasted, stunted life. But on this day, there is a glimmer of hope because her good friend, Jane, has not only invited Shirley to go to Greece on a two-week vacation, but has also bought Shirley’s tickets. Shirley fantasizes about sea and sun as she cooks up a dinner of chips and egg for her husband, Joe.

This play is immensely rich in storytelling and May’s performance is a constant delight. She is as comfortable in the playing of Shirley as Shirley is going about her daily routine. Deftly juggling the demands of a solo performance, while actually cooking a meal onstage takes an actress of tremendous skill. May is more than equal to the task, turning in a performance that is polished, charming, captivating. Eric Hill’s direction is seamless and he manages to keep the often-wordy script moving and pulling us into the sequence of stories.

Russell’s script is, nevertheless, not without fault. He has split the action into two acts, the first dealing with Shirley weighing the decision and possible repercussions of abandoning her husband for two weeks. The second act gets us to a glorious seaside patio where Shirley endeavors to rediscover what has been lost in her life. However, the balance of the play is off, as Russell devotes three-quarters of the script to the dreary little kitchen, dramatizing Shirley’s unfulfilling life and only in the last, short act, do we get to see how Shirley’s escape affects her present and future.

In the final analysis, though, SHIRLEY VALENTINE is a most entertaining production. It was surprising to read that this is May’s first one-woman show. She brings to the stage years of experience and really shines throughout. May has, with the aid of dialect coach Jennifer Scapetis-Tycer, mastered Shirley’s Liverpool accent as well as the Greek and other British accents too. Her performance is well-supported by strong design elements especially the appropriate and telling costumes by Elivia Bovenzi Blitz.

Without giving away too much, you can be sure the story ends with a sense of renewal and joy. So even when Shirley is perhaps telling us more than we want to know, the story is captivating and so is this evening in the theatre.