The Two Of Us Productions Presents “Cabaret” 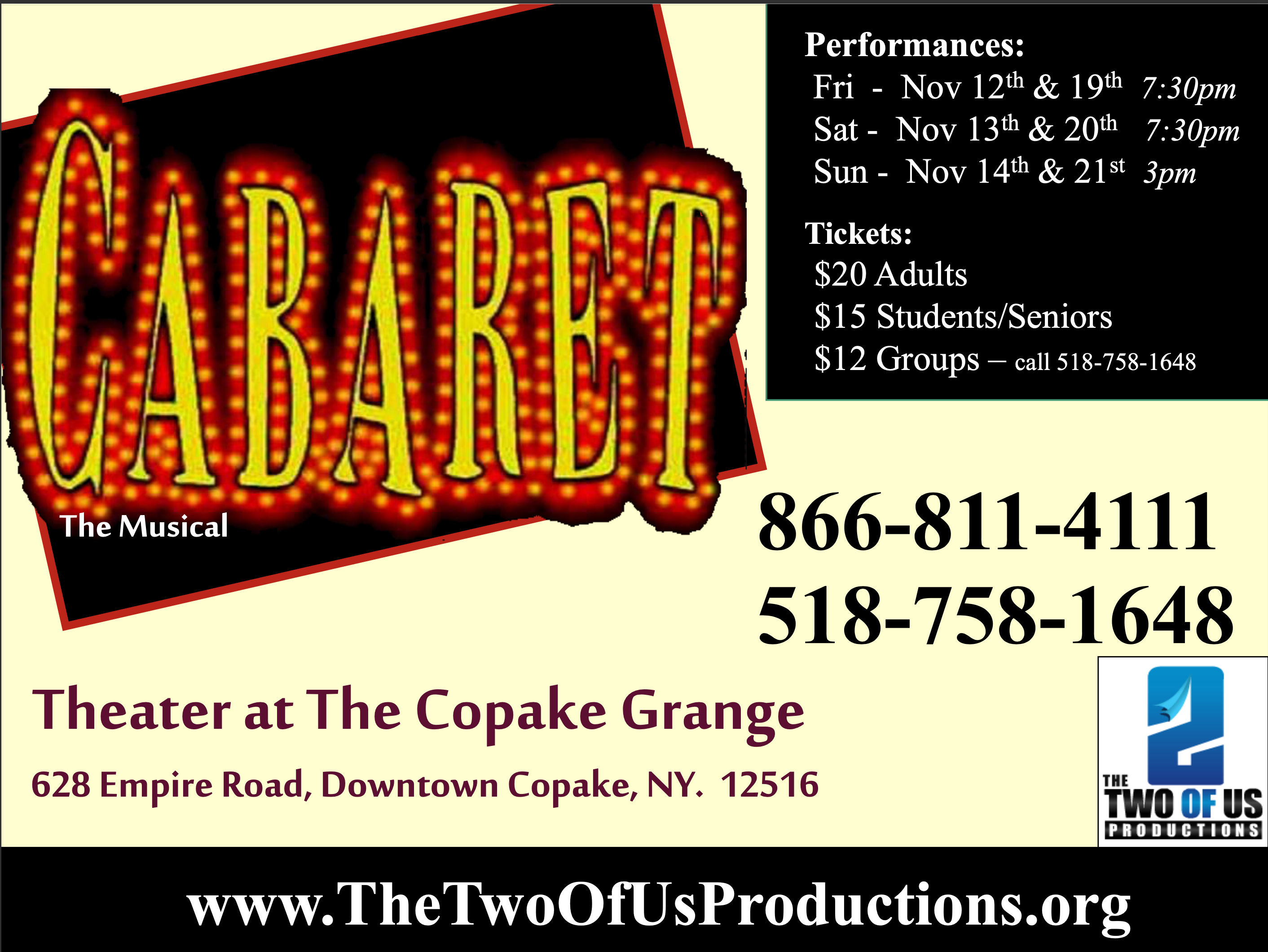 The Two Of Us Productions Presents “Cabaret”

“Life is a CABARET my friend!”

The Two Of Us Productions, a local theater company based in Copake NY, is pleased to return to live in-person theater with CABARET, the award winning musical drama by Joe Masteroff, with music by John Kander & lyrics by Fred Ebb.  Performances are Nov. 12th, 13th, 14th, and the following weekend of Nov. 19th, 20th, & 21st, 2021.  Presented in the intimate Copake Grange Theater in Copake NY, you don’t want to miss this true tale of bigotry, intolerance, religious prejudice, and social upheaval.

At its heart CABARET is a dramatic commentary told through three parallel story lines: the younger couple who are denying reality, the “toast of Mayfair” Fraulein Sally Bowles and the aspiring novelist Cliff Bradshaw from America; a dramatic & gently romantic sub-plot of love denied in the endearing older couple Fraulein Schneider & Herr Schultz; and the social commentary of the Master Of Ceremonies that was played by Joel Grey in the original production & by Alan Cummings in this 1998 version.  The Kit Kat Klub performers that this show is so well known for work with the Master of Ceremonies in commenting on the dark cloud of National Socialism that is engulfing 1930’s Germany & how the gathering storm is impacting the principle characters.

Performances of CABARET are 2 weekends only – November 12th, 13th, 14th, and the following weekend of November 19th, 20th, & 21st, 2021.  Friday and Saturday performances are at 7:30pm and Sunday matinees are at 3pm.  The comfortable & intimate Theater at The Grange is located at The Copake Grange at 628 Empire Road in downtown Copake NY across from the Clocktower Pub.  Tickets are $20 for adults, $15 for students & seniors, and $12 for groups & families.  For advance reservations visit www.TheTwoOfUsProductions.org or call 518-758-1658.  Make your reservations early for the best seats on the date you want!  Please note that for the safety of all of us we require proof-of-vaccination at the door, and we require that audience members be masked at all times while within the theater building.  Our cast, orchestra & crew are all fully vaccinated.

The Two Of Us Productions is well known throughout the Hudson Valley for presenting quality theater, both musicals and dramas.  Their recent productions of Sweeney Todd, Chicago, Les Miserables, next to normal, Deathtrap, Lend Me A Tenor and Jesus Christ Superstar were all recognized by the Theatre Association of NYS with multiple awards, including outstanding work by the company, outstanding performance by the orchestra, excellence in direction, and many individual actor awards.

These performances are supported with funds from Hudson River Bank & Trust Foundation, Stewart’s Shops, Bank of Greene County, Rheinstrom Hill Community Foundation, Greylock Federal Credit Union, and American Endowment Foundation.  This project is also made possible with funds from the Statewide Community Regrants Program, a regrant program of the New York State Council on the Arts with the support of the Office of the Governor and the New York State Legislature and administered by CREATE Council on the Arts.

WHAT:  CABARET, The Musical Drama, a dramatic commentary on the dark cloud of National Socialism that is engulfing 1930’s Germany & how the gathering storm is impacting the principle characters.  Presented by The Two Of Us Productions, the award winning theater company based in Columbia County NY, in collaboration with The Copake Grange.

TICKETS:  Tickets are $20 for adults, $15 for students & seniors, and $12 for groups & families.  For advance reservations visit www.TheTwoOfUsProductions.org or call 518-758-1648. Make your reservations early to get the performance date you want!