REVIEW: “An Iliad” at the Ancram Opera House 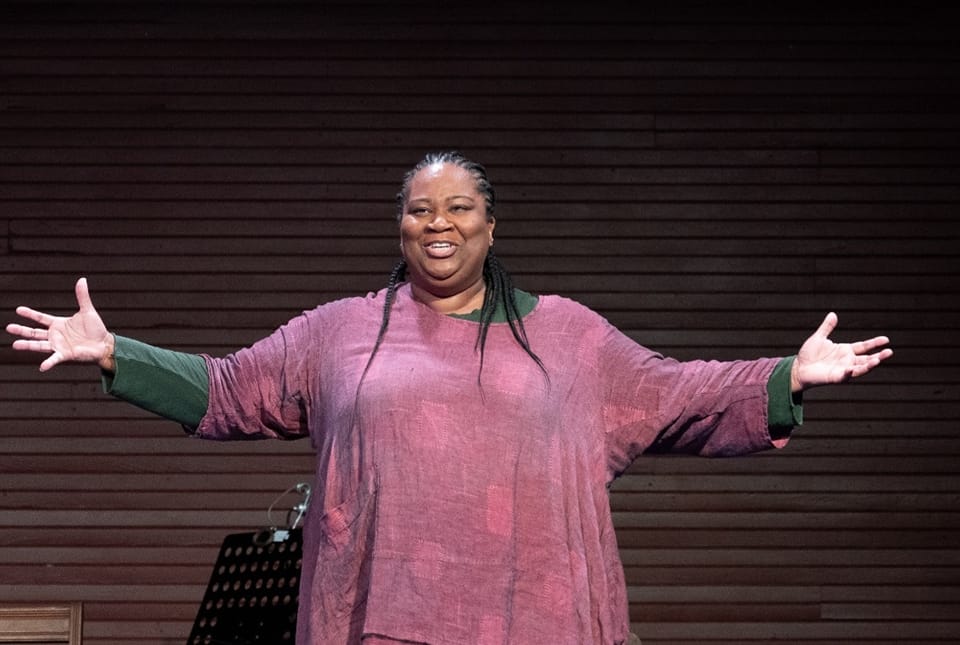 REVIEW: “An Iliad” at the Ancram Opera House

Ancram Opera House presents a battle between two superheroes! Featured in an eighth-century B.C. epic poem (Homer’s The Iliad), Achilles, a demi-god, was the most powerful warrior in Ancient Greece, and his nemesis, Hector, was the greatest warrior in Troy.  Actor MaConnia Chesser, playing the Poet, brings their story to life, like the traveling bards of yesteryear,  in a dazzling solo performance at this intimate theatre.

The Ancram Opera House, run by co-directors Jeffrey Mousseau (who directed An Iliad), and Paul Ricciardi, is devoted to storytelling, which is why this play meshes so well with the mission of their theatre.  Besides performances of plays and cabarets, twice a year Ancram Opera House produces Real People Real Stories, in which local residents (and now students as well) share their personal narratives.  Ancram’s virtual Crystal Radio Sessions present short stories by local writers read by actors like Maconnia Chesser.  An Iliad is their first indoor production in two years.  Written by director Lisa Peterson and actor Denis O’Hare, the play is a modern-day retelling of The Iliad, which dramatizes events in the ninth year of the decade-long Trojan War.  Developed and produced by The New York Theatre Workshop in 2012, the play featured O’Hare and Stephen Spinella alternating performances.  Its many subsequent productions include stints at Capitol Rep and Shakespeare & Company.

In an interview with Berkshire On Stage, director Jeffrey Mousseau comments that because this play “looks directly at our propensity for violence,” it is the right play for our time.  Jonathan Epstein, director of the Shakespeare & Company production in 2015 (starring Michael F. Toomey), points out the irony that “It’s an antiwar play but it exists in the context of acknowledging our fascination with war.”  Beginning with an Ancient Greek verse, the Poet calls on the Muses (Goddesses) for inspiration to sing (in this case recite) the RAGE of Achilles.  Why is this warrior so enraged?  First, because Agamemnon, commander of the Greek armies, appropriated for himself Achilles’ female captive.  Second, having left the battle as a result of his anger at Agamemnon, Achilles is drawn back into it because his closest companion, Patroclus, has been killed by Hector.  But the weary Poet, sickened by having to describe anew the horrors of battle, asks, “It’s always something, isn’t it?” Thus begins the sometimes humorous, always bloody, recital of war.

Although the script calls for a male in the role of the Poet, according to Chesser the playwrights say anyone can perform it, to which she adds:  “anyone brave enough!” Indeed, in an interview at Ancram, the actress describes her excitement at being offered this “beast of a role.”  For ninety intermissionless minutes, she commands the stage.

Chesser is helped by a team of virtuoso designers.  Rather than the bare stage mentioned in the script, set designer Sarah Edkins fills the space  with overturned chairs, tables and stools, suggesting destruction and devastation.  She adds a platform below the stage to enable the actress to move freely.  Establishing the Ancram theatre as the setting of the play signals the relevance of the story to this audience.  According to Mousseau, the playwrights suggest that the auditory elements of An Iliad , created here by the original soundscape of Alexander Sovronsky, serve as “the Muses that create the world for the Poet.” The combination of the underlying music and the exceptional lighting design by James McNamara that seems to change for each beat of the text, propels this monologue forward.  Denise R. Massman’s costume for Chesser, with its many layers and colors, her backpack filled with surprises and the dreadlocks in her hair create the perfect embodiment of this character.

What a challenge it is for an actor to maintain her focus, using every tool in her repertoire, to hold the audience from beginning to end!  Chesser is definitely up to that challenge.  Mousseau’s varied direction calls for her to occupy every part of the stage in the course of this piece, as she plays dozens of characters, often in dialogue with one another, expressing the rage, the fear, the fierceness of the battle scenes, the cruelty, and the misery that war brings to the combatants and their loved ones.  When the actress addresses the audience in her own voice, saying the names of the dead and where they came from (citing U.S. cities and towns), suggesting that if it weren’t for pride or greed or a refusal to stop fighting because they would have to admit it was all a waste of time and of thousands of lives, her moving and bitter response hits home.  Perhaps it would have been better to cut down on the times she raised her voice so as to avoid the hoarseness that can result, or when the script calls for an astonishing list of every war and counting, perhaps the use of projections rather than reading the list would have been preferable.  But these are quibbles:  the production conveys a powerful antiwar message thanks largely to the talent and commitment of MaConnia Chesser.

AN ILIAD runs through October 21 at Ancram Opera House, 1330 County Route 7, Ancram, NY.  For tickets call 518-329-0114 or online at info@ancramoperahouse.org.  Be prepared to show proof of vaccination, ID, and to remain masked throughout the performance.