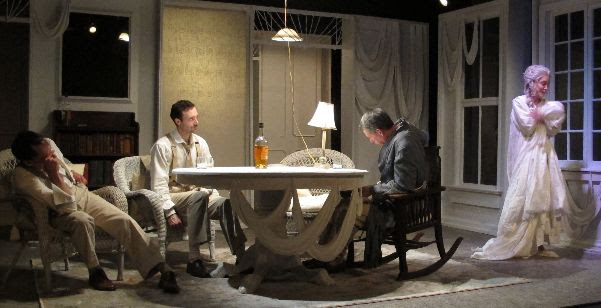 The Bridge Street Theatre’s production of Eugene O’Neill’s Long Day’s Journey Into Night is the fastest three hours I have ever spent in a theatre.

Situated in Catskill, New York, this intimate theatre has produced one interesting and provocative play after another.  The performances and the technical elements are always first-rate and this Long Day’s Journey… epitomizes the quality of their work.  To start, it’s a brave choice due to the complexity of the plot and characters.

O’Neill’s work is always difficult to bring to life, this play being his most abstruse.  Director John Sowle, artistic director of Bridge Street, has brought a clarity to the multiple facets of the Tyrone family.

Highly autobiographical, the play takes place in an unnamed town on the Connecticut coast and focuses on one day in 1912 in O’Neill’s life where we meet his semi-fictional family including his father, James Tyrone, a nationally recognized actor and alcoholic, his mother Mary, a morphine addict, older brother Jamie, an alcoholic drifter, and Edmund, O’Neill’s embodiment of himself.   Edmund is suffering from consumption abetted by alcohol dependence, a trigger to the discord that occurs through the day.  All of them declare they are lonely and angry while they battle their personal demons.

The play begins after breakfast and travels through the day until midnight.  O’Neill imbues the dialogue with contentious intensity and lyricism.  The words “lonely,” “liar” and “love” are sprinkled throughout their arguments as they proclaim their devotion to and appreciation for each other.  One is mesmerized and repelled at the same time by many of their quarrels.  More than once each of the character says, one way or another, “I love you more than I hate you.”

In other hands, this could have been three hours of sturm und drang, but director Sowle and his cast bring humanity and reality to the play.  Steven Patterson’s Tyrone is at once a domineering, self-involved martinet with endearing qualities.  In other versions Tyrone is pompous, but Patterson makes the patriarch almost reasonable in his proclivities which includes an ingrained miserliness and a passionate control over his wife and sons’ lives.  His biographic monologue in the third act is spellbinding.

Roxane Fay’s Mary utilizes a delicacy and fortitude that elicits our sympathy as she contends with her morphine addiction and her emotional confusion for the men of her family.  It is a powerful performance, though she could use a bit more volume in some of her speeches.

Jamie is a very difficult role.  He is sometimes a cipher and sometimes a tiger.  Christopher Patrick Mullen moves through these two states seamlessly as he brings a depth to Jamie’s existence.  Mullen plays a magnificent drunk scene in the third act.

Christopher Joel Onken’s Edmund is the lightning rod for much of the conflict that tears at the family.  He is very sensitive and there are allusions to O’Neill’s self as Edmund quotes poetry and Shakespeare.  Though the youngest in the family, he holds his own in the disputes with the others.    Onken effectively solves the difficult task of Edmund’s diverse personalities.

The maid Cathleen is given a charming personality in her several scenes by Taylor Congdon.

Director Sowle has used a sure hand in controlling the emotional levels of his cast so that the play does not become melodramatic.  The feeling that he, and the intimacy of the playing space, has created for the audience is that we are a fly on the wall watching the Tyrones tear at each other as they proclaim their love.  His staging is effective.  There are moments when the family moves around the living room like lions in a cage.  Despite the flaws in their characters, Sowle has made them empathetic.

The set and costume designs, respectively by Marc Swanson and Michelle Rogers, complement each other’s vision.  Virtually everything is in a shade of white or beige with a minimal splash of color.  This ties the family together in the house that they abhor.  There are bookshelves along the back wall with spines of different hues.  Tyrone’s rocker, which is like a throne, is wood and his dressing gown is blue.  The only other color is the omnipresent bottle of liquor in the second and third acts.

Nick Hawrylko has designed the lights so that as the day closes in, the family is visible against a dark and ominous tone.  The sound of the foghorn and bells on Long Island Sound designed by Carmen Borgia are a constant comment on the implosion of the Tyrones’ lives during this eventful day.  Incidental music by Justin Morrell leading into and out of each act intensifies the mood of the play.

This production will remain in your heart and mind for a long time.