Christmas on the Rocks Returns to TheaterWorks Hartford 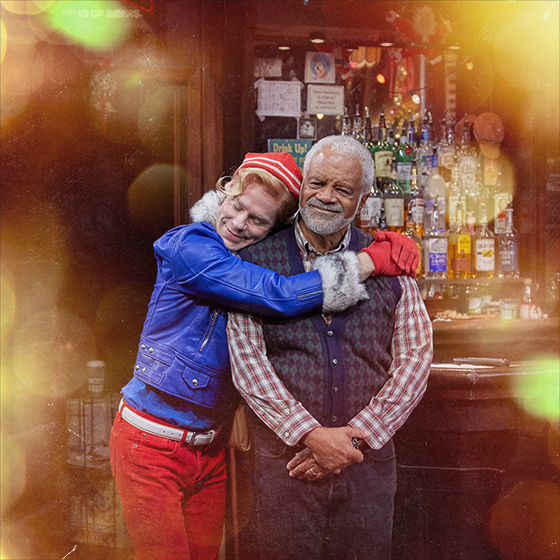 Christmas on the Rocks Returns to TheaterWorks Hartford

TED LANGE (The Bartender) is excited to be back at TheaterWorks Hartford. He is a prolific author, educator, director and actor of stage and screen. Ten seasons on the beloved classic THE LOVE BOAT earned Ted global recognition as well as a star on the Hollywood Walk of Fame. Ted is the recipient of the prestigious Hollywood NAACP’s Renaissance Man Theatre Award and the Heroes and Legends HAL Lifetime Achievement Award. He is a graduate of London’s Royal Academy of Dramatic Arts and has written over twenty five plays including The Cause, My Soul, a prequel to Othello which won the Hollywood NAACP Theatre Best Play award and was presented at the Odyssey Theatre on the 400th anniversary of Shakespeare’s death and at the North Carolina Black Theatre Festival. Ted’s play Four Queens – No Trump won the 1997 Hollywood NAACP Best Play award. He has performed at theaters across the country including Stella Adler Theatre, Classical Theatre of Harlem and the Lorraine Hansberry Theatre among many, many others. His television credits include That’s My Mama, Mr. T and Tina, and guest appearances on Evening Shade, Half and Half, Family Matters, In the Heat of the Night, The Tonight Show with Jay Leno and The Oprah Winfrey Show. When asked about the diversity of his career, Ted states, “The duty of the Artist is to find his muse, then let her rip.”

RANDY HARRISON (The Man) is so pleased to return to TheaterWorks Hartford. Randy’s New York credits include Wicked (Broadway), Harbor (Primary Stages), Edward the Second (Red Bull Theater), Antony and Cleopatra (Theatre for a New Audience), The Singing Forest (NYSF/The Public Theater), Our Hit Parade at Joe’s Pub and QWAN Company’s NOTES! and SWAN!!! (PS122 and Abrons Arts Center). He has toured internationally as the Emcee in Roundabout Theatre Company’s production of Cabaret (Elliot Norton Award). His regional credits include Angels in America Parts 1 & 2 at Berkeley Repertory Theater, Sunday in the Park with George and The Glass Menagerie at the Guthrie Theater, Red at Cleveland Play House, The Habit of Art at Studio Theater DC, Twelfth Night at Shakespeare Theatre DC, Pop! at Yale Repertory Theater as well as six seasons at the Berkshire Theatre Festival (Equus, Amadeus, Mrs Warren’s Profession, Ghosts, Waiting for Godot and The Who’s Tommy). TV Credits include Mr. Robot, Bang Bang You’re Dead and Queer as Folk. He made his directorial debut with the web series New York is Dead, which won best comedy at the New York Television Festival.

JEN CODY (The Woman) is making her TheaterWorks Hartford debut. Jen made her Broadway debut as Rumpleteaser in Cats and has starred in many Broadway shows including: A Christmas Story (Mrs. Schwartz), Shrek (original company), Pajama Game (Poopsie, original revival company), Taboo (original company), Urinetown the Musical (original company), Seussical the Musical (original company), Beauty and The Beast (Silly Girl), and Grease (Cha-Cha). She can be heard on the original cast recordings of Seussical the Musical, Taboo with Boy George, The Pajama Game with Harry Connick Jr., Shrek the Musical, The Wild Party, and Vincent Youman’s Through the Years. She has been awarded the Legacy Robe twice for her work on Broadway. Off-Broadway: Charles Bush’s Cleopatra (Iris), Andrew Lippa’s The Wild Party (Mae), Charles Bush’s Judith of Bethulia, and Henry and Mudge (Drama League Nomination). Her voice can be heard on many cartoons including her award-winning role as Charlotte La Bouff in Disney’s The Princess and The Frog in which she received the Annie Award (Voice over Oscar) for Outstanding Voice Work in a Major Motion Picture. Other cartoons include American Dad (Cartoon Network), Mickey and the Roadster Racers (Disney), Phineus and Ferb (Disney), P. King Duckling, Winx Club (Nickelodeon), Robot and Monster (Nickelodeon), and Khumba (Triggerfish). Her film and TV work includes: New Amsterdam (NBC), Paper Spiders (Cranium Entertainment), Lucky Stiff (New Oz Productions), The Good Fight (CBS), Younger (TVLand), Instinct (CBS), Bull (CBS), Blue Bloods (CBS), Shrek Live (Dreamworks) Unforgettable (CBS), and Law and Order.

About TheaterWorks Hartford
Celebrating its 36th season, TheaterWorks Hartford (TWH) produces high-quality, contemporary theater that is relevant to our audiences, engages a diverse community, and provides insight into the human experience. TWH is committed to the power of storytelling in creating community. Founded in 1985, TWH has produced over 170 plays and presents approximately 225 performances per season. TWH also owns and manages the historic property at 233 Pearl Street, known as City Arts on Pearl. City Arts provides an affordable home and services to a diverse family of non-profit arts organizations.