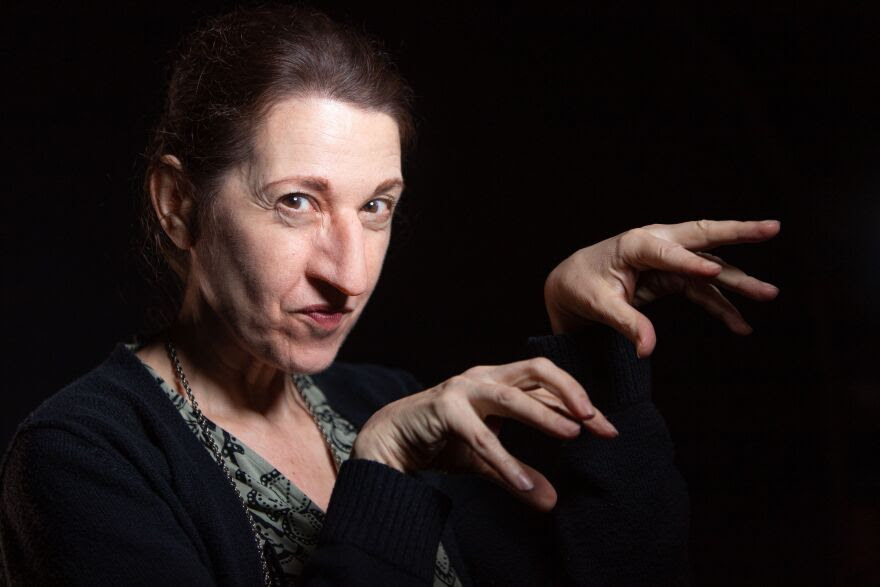 Bookending their fall, 2021 season of American plays, Bridge Street Theatre featured two solo productions, each showcasing a character created by Margaret Hamilton in THE WIZARD OF OZ:  Miss Gulch Returns! in September, and My Witch:  The Margaret Hamilton Stories, currently running.  The former, an original musical by Fred Barton, is a clever, witty and imaginative look at the life of Almira Gulch, the bicycle-riding, animal-hating spinster portrayed by Steven Patterson in the double role of a cabaret singer and the lady herself, both of whom are seeking love.  The latter, as the title suggests, is a run-of-the-mill biography of the late Margaret Hamilton, played by Jean Tafler, peppered with humor, song and spot-on impersonations of show-biz legends.  The evening’s most interesting moments consist of backstage gossip from THE WIZARD OF OZ.

In a Berkshire Eagle interview with Jeffrey Borak, actor-playwright John Ahlin, husband of Jean Tafler, explains the origin of My Witch: a critic who reviewed Tafler’s performance of Scrooge in A Christmas Carol compared her portrayal to Hamilton’s witch, giving Ahlin the idea of writing a play in which Tafler would portray the actress.  Developed at Long Island’s Bay Street Theater in 2019, the play premiered at Maine’s Snowlion Repertory Company.  Although My Witch is being shown at Bridge Street Theatre, it is in many ways a DownEast family affair.  Al D’Andrea, co-founder of Snowlion Rep, directed the current production.  After November performances at Hubbard Hall, in Cambridge, New York it opened at Bridge Street Theatre on December 3rd, co-produced by Ahlin’s Fat Knight Theatre, where Tafler serves as co-founder and managing director.  Check out Ahlin’s website’s opening page, portraying him as the Fat Knight himself—Sir John Falstaff.

Ahlin’s play takes place during a thunderstorm in Hamilton’s cottage on a small island off the coast of Maine, where there is no electricity or phone service.  A figure (Tafler) enters in a black raincoat with a pointy hood (costumes by Brittney Cacace), and screams.  The creepy sound effects, combined with Nick Hawrylko’s lighting and Craig Robinson’s living room set covered in white sheets, suggest that we’re in for a horror show. But what is the connection between this frightening storm, the apparent vision at an upstage window of the ghost of a headless corpse returning from the dead to search for its head, and Hamilton’s life story? Why this attempt by Ahlin to create a tone as frightening as that of the Wicked Witch of the West when Hamilton, a kindergarten teacher who loved children, spends so much time onstage trying to apologize for scaring them?  Is the point of the play to demonstrate this irony? After six decades as a successful character actress on stage, screen and television, it seems that Hamilton’s life is only entertaining for the twelve minutes she spent on screen as a witch.

D’Andrea’s direction keeps Tafler physically occupied throughout the ninety-minute performance.  After acknowledging that we are in a theatre and both audience and actress can see and hear each other, Tafler occasionally engages in dialogue with audience members, walking downstage to ask them questions, pausing for answers, and even reminding one of them to sit up straight.  She tells us that she is expecting guests, which justifies her need to remove the white sheets, clean the room and actually prepare meringues for them.  When Tafler, whose comic timing is excellent, picks up a broom, the delicious look she shares with the audience is priceless.  Because Ahlin assumes that everyone has seen THE WIZARD OF OZ, the play abounds with subtle and not-so-subtle references to the film.  Tafler’s vocal ability to impersonate the voices of acting partners Mae West and W.C Fields (among others), as well as her singing, are highlights of the production.

But Tafler’s Hamilton is also capable of moving us emotionally as she recounts her struggle to fight for her rights as a woman (she was born in 1902, when the nineteenth amendment was years in the future); the heartbreak she suffers when her husband, who had lost his job and was jealous of her acting career, leaves her; the difficulty of raising her child (Hamilton Meserve) alone, facing financial crises as she tries to support them both without giving up her passion for performing; and the constant disparagement of critics and producers who could never see her as a star because she was not beautiful.

The play takes a strange turn at the end when Hamilton suddenly comes to grips with who and where she is, referencing the film’s emphasis on the importance of home.  Bridge Street Theatre has created its own home for top-notch talent, starting with John Sowle’s direction and design and Steven Patterson’s performances.  Rather than introduce the work of other producers, they would do better to shine in their own home-based creations.

All attendees are required to present proof of vaccination, I.D., and remain masked throughout the performance.