“The Prom” to Play Proctors March 1-6 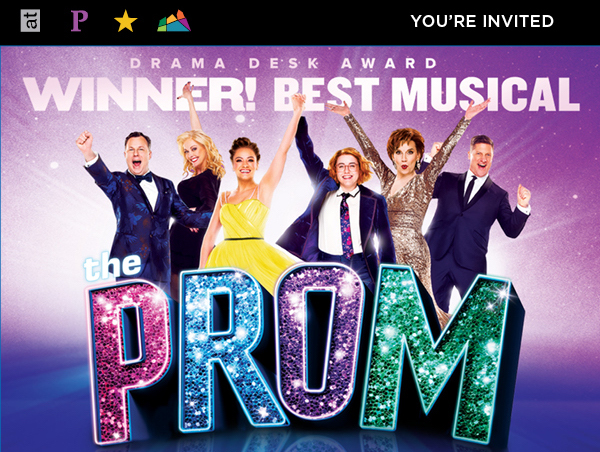 “The Prom” to Play Proctors March 1-6

“TOUCHES A CHORD IN ANY PERSON WHO’S NOT ONLY FOUND A SAFE HOME IN THE WORLD OF MUSICALS, BUT A LITTLE BIT OF HEAVEN, TOO! This joyous, original musical, with a big-laugh book, exuberant songs and jaw-dropping star-turns, is so full of happiness that you think your heart is about to burst. It reminds you what Broadway is all about.” – Variety

“SMART AND BIG-HEARTED. Genuine joy rolls off the stage in this musical full of witty delights, irrepressibly energetic tunes, winking lyrics and a cheeky book. I seldom stopped laughing.

It’s a damn good time! Did I shed several real tears in THE PROM’s final scene? Maybe I did.”

CRITIC’S PICK! “The Prom consistently delivers on its entertainment promises as well as its Golden Age premise: MUSICALS, HOWEVER ZAZZY, CAN ADDRESS THE DEEPEST ISSUES DIVIDING US. Like a certain cockeyed optimist, you may even note a lump in your throat.

SCHENECTADY, NY (Feb. 15) – Producers and co-Presidents of the Prom Committee announced that the National Tour of the 2019 Drama Desk Award winner for Outstanding Musical THE PROM will play Proctors from Tuesday, March 1 – Sunday, March 6. Tickets are available through the Box Office at Proctors, in person or via phone at 518-346-6204 Monday-Friday 10 a.m.-2 p.m. or online at Proctors.org.

Everyone’s invited to the joyous Broadway hit that New York Magazine hails as “smart and big-hearted” while The New York Times declares it “makes you believe in musical comedy again!” THE PROM is a musical comedy about big Broadway stars on a mission to change the world and the love they discover that unites them all.

Variety raves, “It’s so full of happiness that you think your heart is about to burst.” And The Hollywood Reporter cheers, “It’s comic gold!”

Viking Books announced that Saundra Mitchell, author of over twenty books for tweens and teens, has written the YA novelization of the hit Broadway musical comedy, THE PROM to adapt the new original musical into a reading experience that reflects the energy and humor of the show, and echoes its message of acceptance and inclusion. The book was published on September 10, 2019 with Viking Children’s Books, an imprint of Penguin Young Readers.

THE PROM made its world premiere at The Alliance Theatre, Atlanta, GA, Susan V. Booth, Artistic Director, in 2016, and played its final performance at the Longacre Theatre on Broadway on August 11, 2019 after playing 23 previews and 310 regular performances.