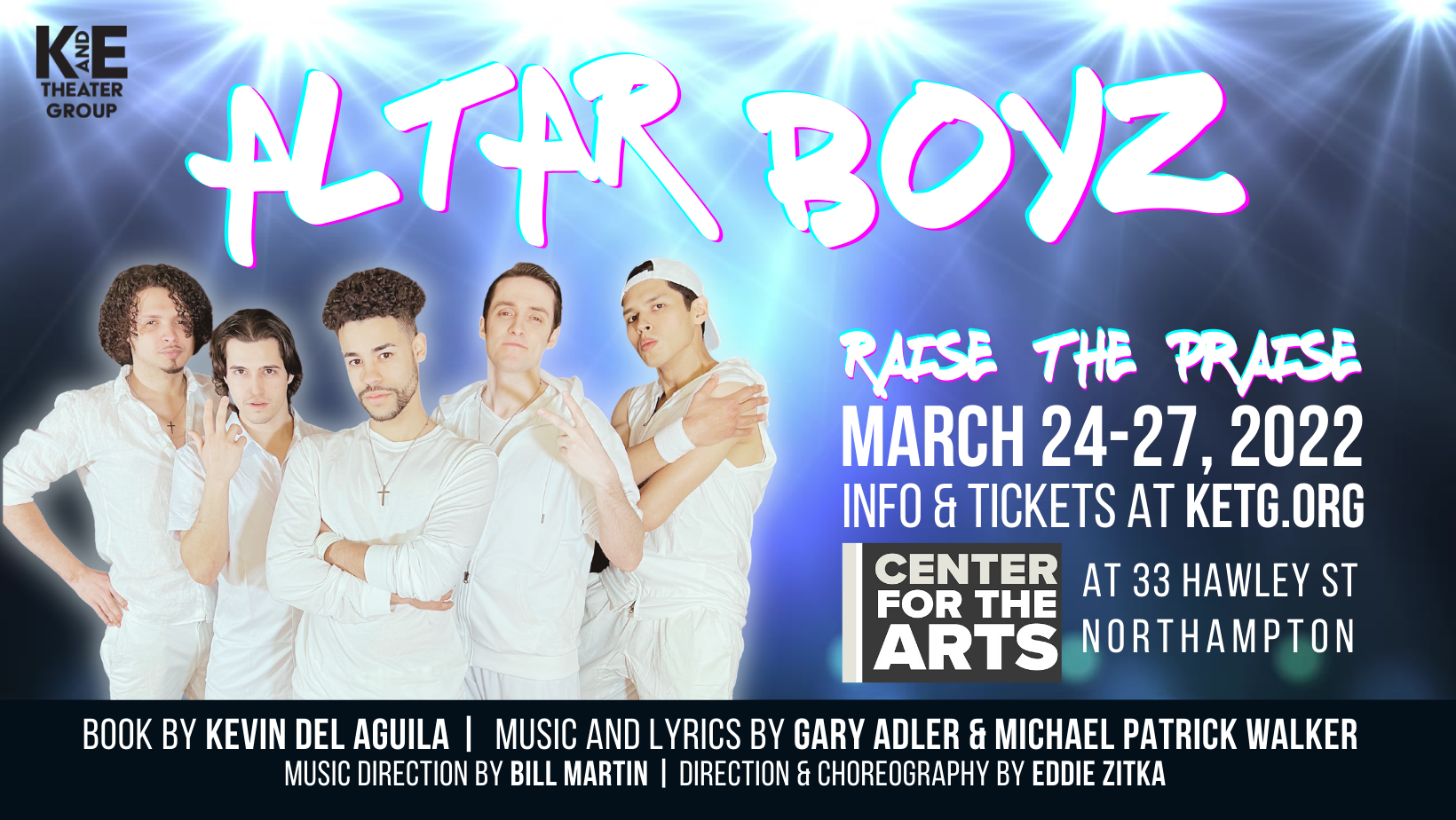 “Raise the Praise” with the winner of the 2005 Outer Critics Circle Award for Outstanding Off-Broadway Musical, Altar Boyz, presented by K and E Theater Group, March 24-27, 2022 at Northampton Center for the Arts in Northampton, Massachusetts.

NORTHAMPTON, MA – K and E Theater Group will begin the second half of their Supersized Season 2 with the Outer Critics Circle Award Winner for Outstanding Off-Broadway Musical, Altar Boyz, onstage at Northampton Center for the Arts, March 24-27, 2022.

With a book by Kevin Del Aguila, and music and lyrics by Gary Adler and Michael Patrick Walker, the Boyz are five all-singing, all-dancing (never-sinning) heartthrobs taking their “Raise the Praise” tour to its final stop and show in Northampton rocking the masses of all denominations. Join Matthew, Mark, Luke, Juan and Abraham as they try to save souls and raise spirits with their providential pop music, divine dancing and holy harmonies! This is one boy band built in heaven!

The K and E Theater production of Altar Boyz is directed and choreographed by K and E Theater Group President and Artistic Director Eddie Zitka, who has also directed and staged the company’s previous productions of Sweeney Todd, Songs for a New World, Assassins, Hello Again and last year’s sold-out production of Cabaret. His performance credits include the first national tour of The Wedding Singer and numerous regional productions, including Ogunquit Playhouse’s Cinderella and All Shook Up, Thoroughly Modern Millie at Greater Boston Stage Company and Hoop Dee Doo Revue at Walt Disney World. Bill Martin is the production’s music director. Ken Comia serves as producer. The season’s supporting sponsors are INSIGHT Structures and Heads Up Coaching and Consulting.

Performances run from Thursday, March 24, 2022, through Sunday, March 27, 2022. Tickets are general admission for $27.00. There is no reserved seating. This production is suitable for all ages. There may be flashing lights.

All performances are at Northampton Center for the Arts, located at 33 Hawley Street in Northampton, Massachusetts. Showtimes for Altar Boyz are 7:30 PM on Thursday, Friday and Saturday evenings. The closing performance is presented at a matinee on Sunday, March 27th beginning at 2:00 PM.

Masks and face coverings will be required for entry and while at the Northampton Center for the Arts.

Tickets and performance information for Altar Boyz are available at www.ketg.org.