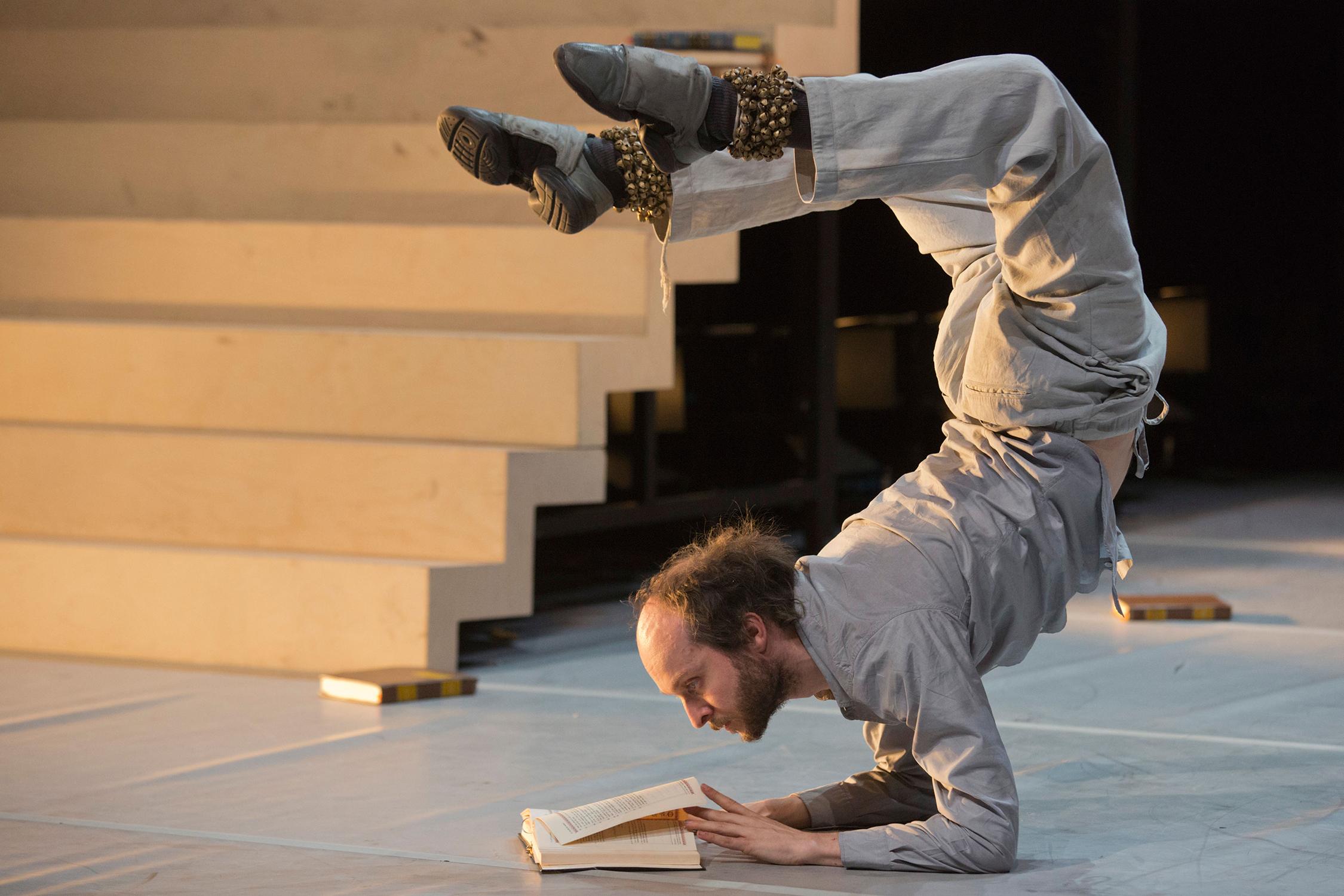 Cherkaoui will be honored at the season-opening Gala on June 18, where performers will include dance luminaries inaugurating the renovated Ted Shawn Theatre

March 15, 2022 (BECKET, Mass.)—Jacob’s Pillow announces Belgian and Moroccan choreographer, dancer, and director Sidi Larbi Cherkaoui as the recipient of the 2022 Jacob’s Pillow Dance Award. Cherkaoui will accept this award and present a new work at the season-opening Gala on June 18.

The Jacob’s Pillow Dance Award, presented each year to an artist of exceptional vision and achievement, carries a cash prize of $25,000 which the artist can use in any way they wish. Cherkaoui is a prominent international contemporary choreographer, dancer, and director who originally hails from Belgium. He has choreographed works for the Royal Ballet, Paris Opera Ballet, and notable works for Cedar Lake Contemporary Ballet, Martha Graham Dance Company, Pilobolus, and Aakash Odedra. He choreographed a music video for Beyoncé and Jay-Z, the recent film “Cyrano” directed by Joe Wright, and was nominated for a Tony in 2021 for his choreography of Broadway’s Jagged Little Pill. He founded his own company, Eastman, in 2010, and has won awards for his solo work and his choreography.

“Sidi Larbi Cherkaoui is a visionary artist of exceptional creativity who has been pushing against boundaries and definitions his entire career,” said Jacob’s Pillow Executive and Artistic Director Pamela Tatge. “The son of a Flemish mother and Moroccan father, in his Antwerp-based company Eastman, he brings together dancers with multiple cultural backgrounds and histories to create ensembles that give us a sense of what global collaboration could look like.

“Cherkaoui has a humility and unbridled curiosity about his place in the world and challenges himself to authentically connect with the human experience through his dances. Equally at home with social dance forms as he is with classical ballet vocabularies, he is also a highly skilled and expressive dancer and has created notable duets for himself and major artists including Akram Khan, María Pagés, and Colin Dunne. Also known for his creation of a singular vocabularies for men dancers, on the occasion of our 90th Anniversary as we honor our founder, Ted Shawn, and his contributions to men in dance, I can’t think of a more fitting and deserving choreographer to receive this award,” she said.

“I’m so excited and happy and proud and humbled about this nomination,” Cherkaoui said. “I’m also so grateful to be coming back to Jacob’s Pillow’s beautiful festival this year, one of my – and so many other dancers and dance makers’ – favorite places to perform in the whole world. I still remember with so much love in my heart, when we had the privilege of dancing Fractus V a couple of years ago. But also being there with the Ballet du Grand Théâtre de Genève with Loin or Cedar Lake Dance Company’s Orbo Novo way back in 2009. It feels the festival has been a place for so many of us to grow as artists, as human beings. It is also a place for us to understand more about the history of dance in the U.S. but also of dance in the rest of the world.

“I can’t find the words to describe my gratitude, but it is deep and it is full of care and humility. I’m overwhelmed with feelings: an abundance of love,” he said.

At the season-opening gala on June 18, Cherkaoui will present the world premiere of a new work titled con fuoco, a duet for dancers Robbie Moore and Andrea Bou Othmane that will be supported with live singing by Ghalia Benali.

In addition to his groundbreaking contemporary choreography, Cherkaoui has served as artistic director at the helm of Belgium’s Royal Ballet of Flanders, a post he held for seven years from 2014-2021, and he will become the artistic director of Switzerland’s Ballet du Grand Théâtre de Genève during the summer of 2022.

Cherkaoui founded the company Eastman in 2010 as an avenue to produce and disseminate his work, not only in dance, but also in the genres of theater, opera, musicals, and other forms. Based in his hometown of Antwerp, Belgium, the company has offered him the means to create work in his own way including masterworks like Sutra (2008) and Babel (2010).

Growing up, Cherkaoui performed as a dancer in shows and television programs. He studied dance at P.A.R.T.S. in Brussels under Anne Teresa De Keersmaeker and was influenced by choreographers including William Forsythe, Trisha Brown, and Pina Bausch.

His debut as a choreographer was in 1999 with Andrew Wale’s contemporary musical, Anonymous Society. Since then, he has made over 50 full-fledged choreographic pieces and picked up a slew of awards, including two Olivier Awards, three Ballet Tanz awards for best choreographer (2008, 2011, 2017) and the Kairos Prize (2009) for his artistic vision and his quest for intercultural dialogue.

The June 18 Gala will also inaugurate the newly renovated Ted Shawn Theatre, which will reopen for performances in Festival 2022, in time for the Pillow’s 90th Anniversary Season.

ABOUT THE JACOB’S PILLOW DANCE AWARD

The Jacob’s Pillow Dance Award was created in 2007 by an anonymous donor whose commitment to an ongoing annual gift to Jacob’s Pillow of $50,000 is generous and far-reaching. The Award, presented each year to an artist of exceptional vision and achievement, carries a cash prize of $25,000 which the artist can use in any way they wish. Past honorees include Annabelle Lopez Ochoa, Faye Driscoll, Liz Lerman, Camille A. Brown, Kyle Abraham, and Michelle Dorrance.

The remaining $25,000 supports the Pillow’s commitment to the research and development of new work in the recently launched Pillow Lab. Year-round residencies at the Pillow Lab offer free housing, unlimited use of studio space, and access to the Pillow’s rare and extensive Archives and resources. In commemoration, the honoree also receives a custom-designed glass award sculpture by Berkshire-based artist Tom Patti, whose work is in the collections of the Metropolitan Museum and other major arts institutions around the world.

Aakash Odedra in Constellation from 2017:

Jacob’s Pillow is a National Historic Landmark, recipient of the National Medal of Arts, and home to America’s longest-running international dance festival, currently celebrating its 90th Anniversary Season. Jacob’s Pillow rests on the traditional lands of the Agawam, the Nipmuc, the Pocumtuc, and the Mohican and we honor their elders past, present, and future. Each Festival includes national and international dance companies and free and ticketed performances, talks, tours, classes, exhibits, events, and community programs. The School at Jacob’s Pillow, one of the field’s most prestigious professional dance training centers, encompasses the diverse disciplines of Contemporary Ballet, Contemporary, Tap, Photography, Choreography, and an annual rotating program. The Pillow also provides professional advancement opportunities across disciplines of arts administration, design, video, and production through seasonal internships and a year-round Administrative Fellows program. With growing community engagement programs, the Pillow serves as a partner and active citizen in its local community. The Pillow’s extensive Archives, open year-round to the public and online at danceinteractive.jacobspillow.org, chronicle more than a century of dance in photographs, programs, books, costumes, audiotapes, and videos. Notable artists who have created or premiered dances at the Pillow include choreographers Antony Tudor, Agnes de Mille, Alvin Ailey, Donald McKayle, Kevin McKenzie, Twyla Tharp, Ralph Lemon, Susan Marshall, Trisha Brown, Ronald K. Brown, Wally Cardona, Andrea Miller, and Trey McIntyre; performed by artists such as Mikhail Baryshnikov, Carmen de Lavallade, Mark Morris, Dame Margot Fonteyn, Edward Villella, Rasta Thomas, and hundreds of others. On March 2, 2011, President Barack Obama honored Jacob’s Pillow with a National Medal of Arts, the highest arts award given by the United States Government, making the Pillow the first dance presenting organization to receive this prestigious award. The Pillow’s Executive and Artistic Director since 2016 is Pamela Tatge. For more information, visit www.jacobspillow.org.