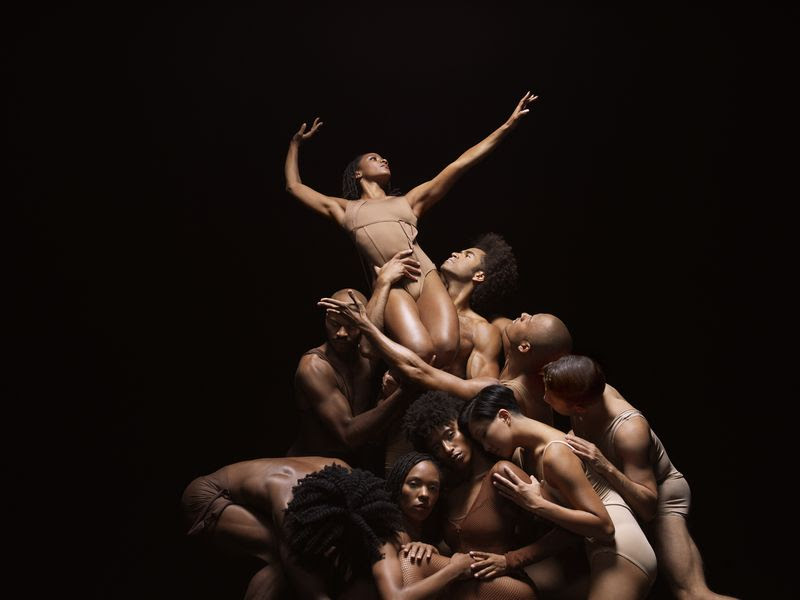 The one-night-only Battle 10th Anniversary program features Robert Battle’s For Four, a season world premiere adapted from video to stage that captures the pent-up energy of a world cooped up during the pandemic, set to a Wynton Marsalis jazz score written in 4/4 time, and a new production of his sensuous, swirling duet Unfold, evoking the tenderness and ecstasy in Gustave Charpentier’s aria “Depuis Le Jour” sung by the incomparable Leontyne Price. The evening also includes Battle’s Ella, In/Side, Love Stories finale, Mass, and Takademe. Alvin Ailey’s must-see masterpiece Revelations, which has inspired generations through its powerful storytelling and soul-stirring spirituals since its creation in 1960, will be the inspiring finale.

“Alvin Ailey’s vision opened the door for generations of artists to use dance to inspire, unite, and enlighten,” stated Artistic Director Robert Battle. “Despite the twists and turns on the road we have all traveled together, we continue to find new ways to share artistry that renews our spirit of courage, hope, and joy. I am deeply humbled to have led this seminal Company for a decade, joined by incomparable dancers and choreographers on a journey of discovery that extends from the powerful works of our founder to the important voices of today—an ongoing dance dialogue that shines a light on the strength and resilience of our common humanity around the world.”

Alvin Ailey is the focus of the acclaimed new documentary film Ailey, streaming on PBS and Hulu, which explores the man, his work and its powerful legacy which continues today in the inspiring performances of Alvin Ailey American Dance Theater. In 1958, Alvin Ailey and a small group of dancers took the stage in New York and forever changed American dance and culture. One of the country’s groundbreaking greats, his Company inspires all in a universal celebration of the human spirit using the African-American cultural experience and the modern dance tradition. Now in its seventh decade, Ailey continues to move forward under the leadership of Robert Battle, revealing time and again why Alvin Ailey American Dance Theater is one of the world’s most beloved dance companies.

Alvin Ailey American Dance Theater, recognized by U.S. Congressional resolution as a vital American “Cultural Ambassador to the World,” grew from a now‐fabled March 1958 performance in New York that changed forever the perception of American dance. Founded by Alvin Ailey, posthumous recipient of the Presidential Medal of Freedom —the nation’s highest civilian honor—and guided by Judith Jamison beginning in 1989, the Company is now led by Robert Battle, whom Judith Jamison chose to succeed her on July 1, 2011. Alvin Ailey American Dance Theater has performed for an estimated 25 million people in 71 countries on six continents, promoting the uniqueness of the African American cultural experience and the preservation and enrichment of the American modern dance tradition. In addition to being the Principal Dance Company of New York City Center, where its performances have become a year‐end tradition, the Ailey company performs annually at the John F. Kennedy Center for the Performing Arts in Washington, D.C., the Auditorium Theatre in Chicago, The Fox Theatre in Atlanta, Zellerbach Hall in Berkeley, California, and at the New Jersey Performing Arts Center in Newark (where it is the Principal Resident Affiliate), and appears frequently in other major theaters throughout the world during extensive yearly tours. The Ailey organization also includes Ailey II (1974), a second performing company of emerging young dancers and innovative choreographers; The Ailey School (1969), one of the most extensive dance training programs in the world; Ailey Arts In Education & Community Programs, which brings dance into the classrooms, communities and lives of people of all ages; and The Ailey Extension (2005), a program offering dance and fitness classes to the general public, which began with the opening of Ailey’s permanent home—the largest building dedicated to dance in New York City, the dance capital of the world—named The Joan Weill Center for Dance, at 55th Street at 9th Avenue in New York City. For more information, visit alvinailey.org.

About the UMass Fine Arts Center

The UMass Fine Arts Center seeks to engage and inspire the campus and regional communities in the arts through a broad array of exemplary performances, exhibitions, and educational programs. Since our founding in 1975, the UMass Fine Arts Center has been a central force in the cultural, social and academic life of the university, the Five Colleges, and the Pioneer Valley of western Massachusetts. The Fine Arts Center’s combination of educational, visual, and performing arts programs not only makes us distinct, but also secures a vital and necessary position for us to meet the diverse needs of scholars, faculty, students, alumni and the broader community. We offer a variety of stellar arts and education programs that create a unique delivery service for the arts with many points of entry. We provide a variety and depth of experiences that touch the lives of students from the University of Massachusetts and the Five Colleges, as well as the campus and regional communities. Each program engages its audience with a curatorial vision appealing to individuals and groups both on and off campus. These programs fulfill the Center’s mission by providing affordable access to high quality arts programming and engaging in public service that advances knowledge and improves lives. For more information, visit https://fac.umass.edu.

In a year-long consultative and deeply collaborative process with respected advisors from local Tribal Nations, the UMass Native Advisory Council co-developed this campus Land Acknowledgement. This Acknowledgement affirms our campus connection and relationship to the land the campus is built upon and our continued connection to the Nations who were the original inhabitants and caretakers of this land. Read the Land Acknowledgement.