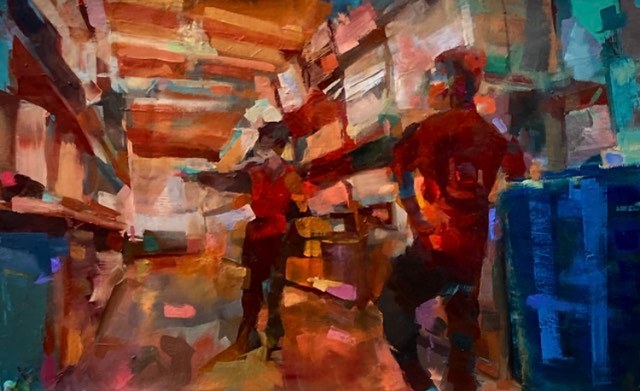 In a small town on the Snake River in Washington, two young men from wildly different backgrounds discover a common connection while stocking shelves together on the night shift at Costco in Samuel D. Hunter’s “Clarkston”, coming to Catskill’s Bridge Street Theatre for eight performances only April 28 – May 8, 2022.

In this moving companion piece to Hunter’s “Lewiston” (produced to great critical acclaim by Bridge Street Theatre during its 2021 Season), Jake, a distant relative of explorer William Clark, has fled his privileged life in Connecticut after being diagnosed with a fatal illness. Chris, an aspiring writer with a meth-addicted mom, is stuck in what he’s afraid is a dead-end life in a dead-end town. Their initial tentative attraction soon deepens into something scarier and more intimate, a bond that might, just possibly, help them break out of their mutual despair. The vulnerability of these characters (including Chris’s mother Trish), enhanced by the proximity of actors-to-audience in BST’s 84-seat house, as well as the theatre’s growing reputation for deeply committed, risk-taking productions, promises audiences an evening of truly unforgettable theatre.

This regional premiere will be directed by Daniel Elihu Kramer (Artistic Director of the celebrated Chester Theatre Company in Massachusetts), with sets by John Sowle and costumes by Michelle Rogers. Featured in the cast, all making their Bridge Street Theatre debuts, are actors Tara Franklin, Brian Patterson, and Hunter Ringsmith. Production Stage Manager is Liz Powers.

For the safety of both audiences and artists, Bridge Street Theatre follows union and state guidelines for indoor entertainment venues. All patrons will need to provide proof of vaccination or a recent negative test for COVID at the door prior to entry, with discretionary masking once inside the theatre building. For more detailed information on the theatre’s current safety precautions and attendance requirements, visit bridgest.org/covid-safety-rules-at-bst/.

“Clarkston” will be performed Thursdays – Sundays, April 28 – May 8, 2022, on Bridge Street Theatre’s “Priscilla” Mainstage, located at 44 West Bridge Street in the Village of Catskill. The show runs approximately 90 minutes without intermission and is recommended for audiences ages 12 and over. Thursday, Friday, and Saturday performances are at 7:30pm, with Sunday matinees at 2:00pm. Admission at the door is $25, Students and Children ages 18 and under are only $10. Discounted advance tickets (highly recommended) are available for $22 (+ a small service fee) at bridgest.org/clarkston-tickets/. In addition, the Thursday April 28 preview and Sunday May 1 matinee will each be bargain “Pay-What-You-Will” performances, with seat prices beginning at $5. For further information on “Clarkston” and other upcoming events, visit the Bridge Street Theatre website at bridgest.org.

In its review, Nippertown praised Bridge Street Theatre’s 2021 production of Samuel D. Hunter’s “Lewiston” as “a small miracle of deeply felt, character driven Americana whose hard-won peace just might ignite your own hope.” The same can definitely be said of its companion piece, “Clarkston”. Don’t miss the chance to experience this heartbreaking and deeply American play in its upstate premiere.

Tickets:
Advance tickets available at https://bridgest.org/clarkston-tickets/
General Admission $22, $10 for Students and Children ages 18 and under
Tickets can also be purchased at the door prior to each performance (on a space available basis) for $25, $10 for Students ages 18 & under.