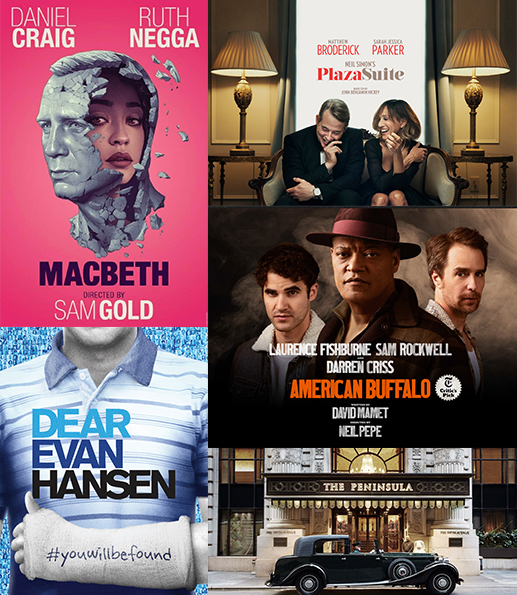 Great Barrington Public Theater’s Broadway Play online auction is now open for bids. From now until May 27, theater lovers can support the company’s lively coming season by bidding on pairs of Producer’s House seats to four of the best shows currently running on Broadway, three which come with a special gift bag from the production teams.

Broadway Play tickets with gift bags include the world premiere production of Macbeth, starring Daniel Craig and Ruth Negga, in her Broadway debut, directed by Tony Award-winner Sam Gold. Bids can also be made to see two-time Tony Award-winner Matthew Broderick and two-time Emmy award-winner Sarah Jessica Parker in Neil Simon’s all-time comedy favorite, Plaza Suite. It’s the first time Broderick and Parker have performed together on Broadway in more than twenty years; or bids can be made on two Producer’s House seats and accompanying swag bag for the international sensation Dear Evan Hansen, winner of the Grammy, the Olivier, and six Tony awards including Best Musical, and called by the New York Times “a gorgeous musical for anyone with a beating heart.” The Broadway Play auction also includes a pair of tickets to the just Tony-nominated, NY Times critic’s pick run of David Mamet’s American Buffalo, starring Laurence Fishburne, Sam Rockwell and Darren Criss, directed by Neil Pepe (gift bag is not included for this item).

To make the playdate even more memorable, the Broadway Play auction offers a one-night stay at the Peninsula Hotel. Ideally located on Fifth Avenue in Midtown Manhattan, The Peninsula is in the heart of the city’s most prestigious shopping, entertainment and cultural district, within walking distance of Central Park, Rockefeller Center, the best restaurants, museums and all Broadway theaters.

Bids can be placed on any of the play tickets, which can be used at the convenience and schedule of the winners. The Peninsula stay is best scheduled for June or July. Online bids are made by simply registering on the Bidding Owl site, at https://www.biddingowl.com/Auction/index.cfm?auctionID=30200.

Bidders will be notified by text or email when higher bids occur, or when their bid wins the desired items.

Participants in the GBPT Broadway Play online auction can look forward to a special experience on Broadway while supporting the new works, new voices and artists that Great Barrington Public Theater brings to stage at affordable ticket prices for all.

All information on the auction and the company’s coming ten-week season can be found on the company website.  https://www.greatbarringtonpublictheater.org/