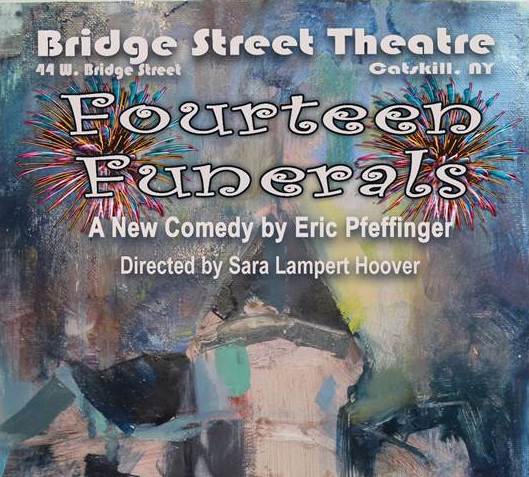 Strange things can happen when you go home again to a place you never really knew. Audiences will discover that for themselves when Eric Pfeffinger’s surprisingly side-splitting “Fourteen Funerals” hits Catskill’s Bridge Street Theatre for eight performances only, June 2-12.

After a mysterious phone call draws bi-racial Chicago girl Sienna to rural Blissfield, Indiana, the small town her now-deceased parents fled while she was still a toddler, she’s shocked to discover that a freak fireworks accident has carried off every single member of the estranged extended family she’s never really known. Even more shocking is that, as the very last of the Fitchwoods, she’s expected to deliver separate eulogies for every single one of them. But most shocking of all might be the totally unexpected friendship that she stumbles into with Millie, the strangely perky receptionist at Blissfield’s Martin Mortuary.

Eric Pfeffinger is a playwright in Ohio who grew up in Indiana and likes to work in Chicago. He enjoys a robust Midwestern humility. His work has been produced by Actors Theater of Louisville’s Humana Festival of New American Plays, the Denver Theatre Center, the Geva Theater Center, the Phoenix Theatre, and the Bloomington Playwrights Project. His plays include “Accidental Rapture”, “Hunting High”, “Some Other Kind of Person”, “Barrenness”, “Assholes and Aureoles”, “Malignance”, and the plays for young audiences “Lost and Foundling” and “The Day John Henry Came to School”. “Fourteen Funerals” received its world premiere this past February at Butterfly Effect Theatre Company in Boulder, CO.

The play’s East Coast premiere (its second production ever) will be directed by Sara Lampert Hoover (BST’s “Frankie & Johnny in the Clair de Lune”, “Better”, and “Lewiston”) with sets and lighting by John Sowle and costumes by Alexis Costa. Featured in the cast are Montana Lampert Hoover and Haley Wong. Production Stage Manager is Sarah Foster.

For the safety of both audiences and artists, with Greene County returning to high risk for COVID, patrons will need to provide proof of vaccination or a recent negative test for COVID at the door prior to entry and masks will be required while in the theatre building. For more detailed information on the theatre’s current safety precautions and attendance requirements, visit bridgest.org/covid-safety-rules-at-bst/.

“Fourteen Funerals” will be performed Thursdays – Sundays, June 2 – 12, 2022, on Bridge Street Theatre’s “Priscilla” Mainstage, located at 44 West Bridge Street in the Village of Catskill. The show runs approximately 90 minutes without intermission and is recommended for audiences ages 12 and over. Thursday, Friday, and Saturday performances are at 7:30pm, with Sunday matinees at 2:00pm. Admission at the door is $25, Students and Children ages 18 and under are only $10. Discounted advance tickets (highly recommended) are available for $22/$10 (+ a small service fee) at bridgest.org/fourteen-funerals-tickets/. In addition, the Thursday June 2 preview and Sunday June 5 matinee will each be bargain “Pay-What-You-Will” performances, with seat prices beginning at $5. For further information on “Fourteen Funerals” and other upcoming events, visit the Bridge Street Theatre website at bridgest.org.

This is a City Mouse/Country Mouse story with a difference! Don’t miss the chance to experience this unexpectedly uproarious new comedy in its East Coast premiere.

Tickets:
Advance tickets available at https://bridgest.org/fourteen-funerals-tickets/
General Admission $22, $10 for Students and Children ages 18 and under (+ small service fee)
Tickets can also be purchased at the door prior to each performance (on a space available basis) for $25, $10 for Students ages 18 & under.