REVIEW: “My Fair Lady” at Proctors 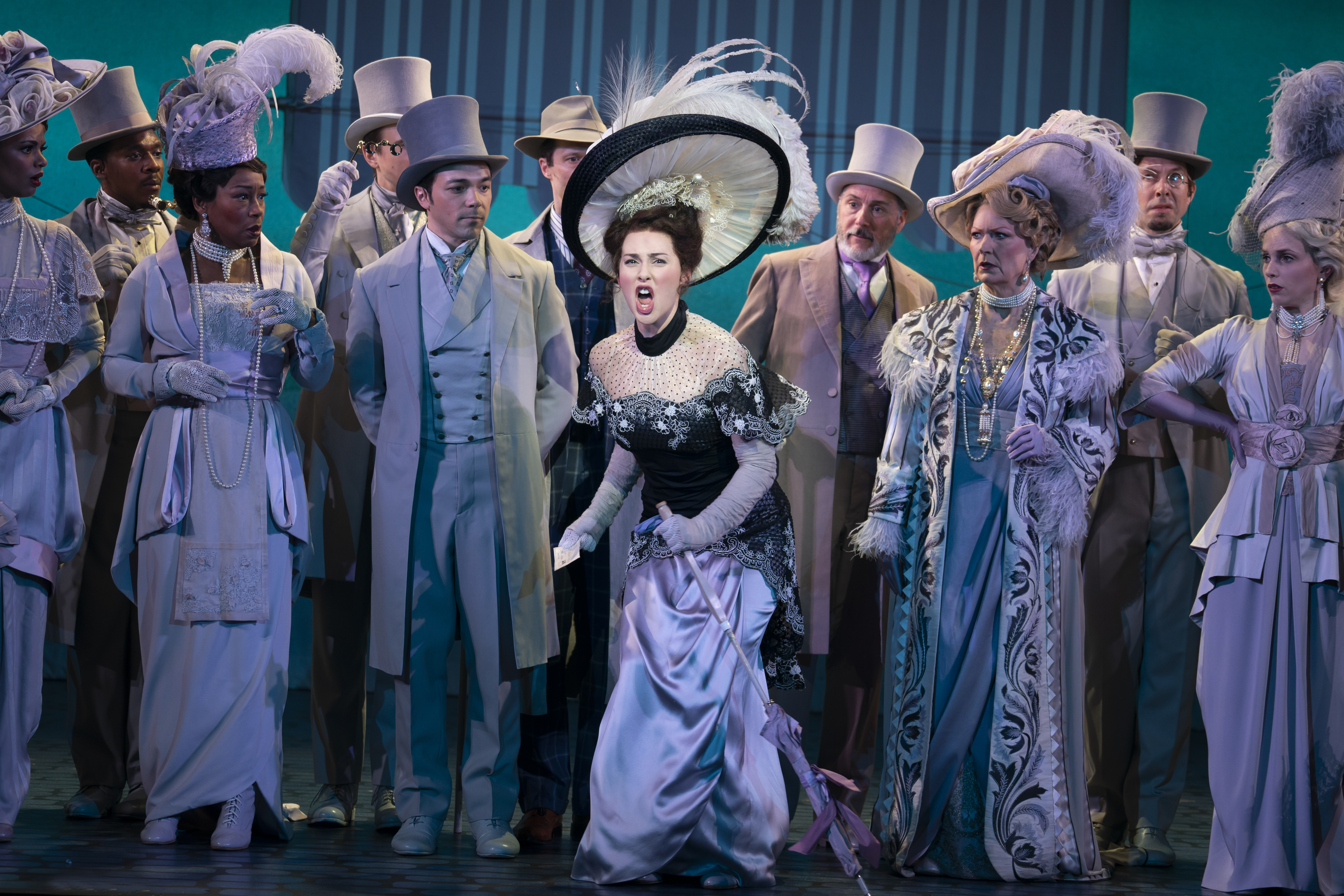 REVIEW: “My Fair Lady” at Proctors

This Fair Lady is a sublime show which glitters under the direction of Bartlett Sher. With gorgeous sets by Michael Yeargan, lavish costumes by Catherine Zuber, exquisite lighting by Donald Holder, this production effectively captures a Victorian London in dreamy lavenders, pinks, and pearl grays and luminous light. From the very beginning the projection of London on the cyclorama, the street lamps, the grouping of the street denizens, the settings and the transitions are breathtaking—we go from the steps of Covent Garden, to the handsome two-story Higgins’ study, to the races at Ascot, to a rowdy dance hall, and more.

The musical is adapted from the sardonic wit of George Bernard Shaw’s play, PYGMALION as well as Gabriel Pascal’s film. Eliza Doolittle, a poor Cockney flower girl, is seen selling her violets to the rich attendees coming out of the opera. Professor Henry Higgins, a famous linguist, is lurking in the shadows, making notes on Eliza’s wretched English. He happens to meet his old friend and colleague Colonel Pickering. When Higgins claims the flower girl could be passed off as a duchess if she could speak proper English, Pickering makes him a bet and the wheels are set in motion.

The book and lyrics are by Alan Jay Lerner and the music by Frederick Loewe—the incomparable team that created so many unforgettable American musicals. Together they were able to translate Shaw’s story into a romantic and immensely entertaining evening The songs tell the story: When they first meet, Higgins is complaining about “Why Can’t the English” (teach their children how to speak?), as Eliza expresses simple dreams of a future where she is warm and loved in “Wouldn’t It Be Loverly?”  When Eliza arrives at Higgins’ flat, insisting he teach her to speak properly, Higgins reveals his total lack of empathy or interest in her except to win his bet with Pickering. He is a confirmed bachelor, a misanthrope who looks down on everyone, especially women, as he explains in “I’m an Ordinary Man.” The first act moves like a locomotive, with songs and dances of the street sweepers and Eliza’s drunken father, Doolittle, set against the controlled politeness and elegant disdain of the Ascot Gavotte where Eliza’s refined speech is first tested. She catches the eye of Freddy Eynsford-Hill, a poor but socially prominent gentleman.

In act II, the big test of Eliza’s transformation from gutter to high society comes at the Embassy Ball. Her performance is flawless and a rival linguist declares she actually is a Duchess. Having won his bet, Higgins celebrates with Pickering as they sing “You Did It”—totally ignoring Eliza or the months of torment and struggle it took her to rise above her station. Eliza vows vengeance (“Just you Wait”) and lashes out at Higgins as she realizes she can’t go home again and he has no use for her. She takes refuge with Higgins’ mother, who fully grasps what Higgins cannot see.

Meanwhile, Eliza’s father is getting married and the raucous “Get Me to the Church on Time” provides joy and laughter. Freddy’s lovely ballad “On the Street Where You Live” provides balance to Higgins’ acerbic pomposity. The question remains as to whether Higgins can realize that he not only cares for Eliza, but has also become totally dependent upon her. He sings the pensive “I’ve Grown Accustomed to Her Face” and at the end Eliza walks back in the door.

That final choice was controversial even in Shaw’s plays (there were two different endings—one where Eliza didn’t return). There is no dialogue or action in the last reunion of Eliza and Higgins – she just gives him a subtle caress and exits (presumably deciding to stay and accept Higgins as he is). It is so unresolved and comes after months of Higgins’ insults and meanness, that in 2022 one wishes for a more satisfying resolution. Lerner and Loewe capitalize on the romance up until the end but are true to the Shavian perspective on the world. However, the ambiguity leaves us wanting more.

The performance on May 17th was polished and entertaining. This is a show that appeals on so many levels. Much of the music is unforgettable under the supervision of Ted Sperling and Music Director/Conductor John Bell. The dance numbers range from the can-can to waltz and are delightfully staged by choreographer Christopher Gattelli with dance arrangements by Trude Rittmann.  That music and dance and the extremely fine acting under Sher’s masterful stage direction create a thrilling evening at the theatre. The large ensemble (of 35 performers) is ethnically diverse and equal to the challenge of Lerner and Loewe’s amazing score and script.

It must be noted there were an unusual number of understudies headlining the show at this performance—including Eliza, Higgins, Pickering, and Freddy. The posted notice at the entrance of the theatre listed ten roles being played by understudies or (in the case of Higgins) by an actor not even listed in the program. It is a credit to all of the performers that they didn’t seem to miss a step or a line.

At the top of the list is the multi-talented Wade McCollum, who played Henry Higgins. He seems to savor every minute onstage and manages to charm us in spite of Higgin’s insensitivity and callousness. He sings well and brings energy and spirit to a role that has sometimes been laconic or more reflective. Sarah Quinn Taylor is the understudy who played Eliza in this performance. She is a lovely actress, although her vocal quality tended to soar into an operatic tone that did not quite jive with the character. Her Cockney accent also made her very hard to understand before Higgins changes her speech.

As for the other leads, Patrick Kerr was quite effective as Pickering and a good match for the gusto of Higgins. Martin Fisher was tremendously entertaining as the larger-than-life Alfred Doolittle. He captured the lusty physicality of the drunken father of Eliza and his voice is magnificent. Another marvelous voice is that of George Psomas, the understudy who played the part of Freddy. His rendition of “On the Street Where You Live” was a highlight of the show. As noted, the entire ensemble turned in fine performances, but I must acknowledge Leslie Alexander, who played Mrs. Higgins. She brought a genuine gravitas and warmth to her role as Higgin’s mother. She knows how to set up a line perfectly and did not miss a single moment.

All in all, this is a MY FAIR LADY to remember. I agree with the New York Times critic who called it “A marvelous and transformative revival.” It is really worth the trip to Proctors to experience such a dazzling evening of theatre.