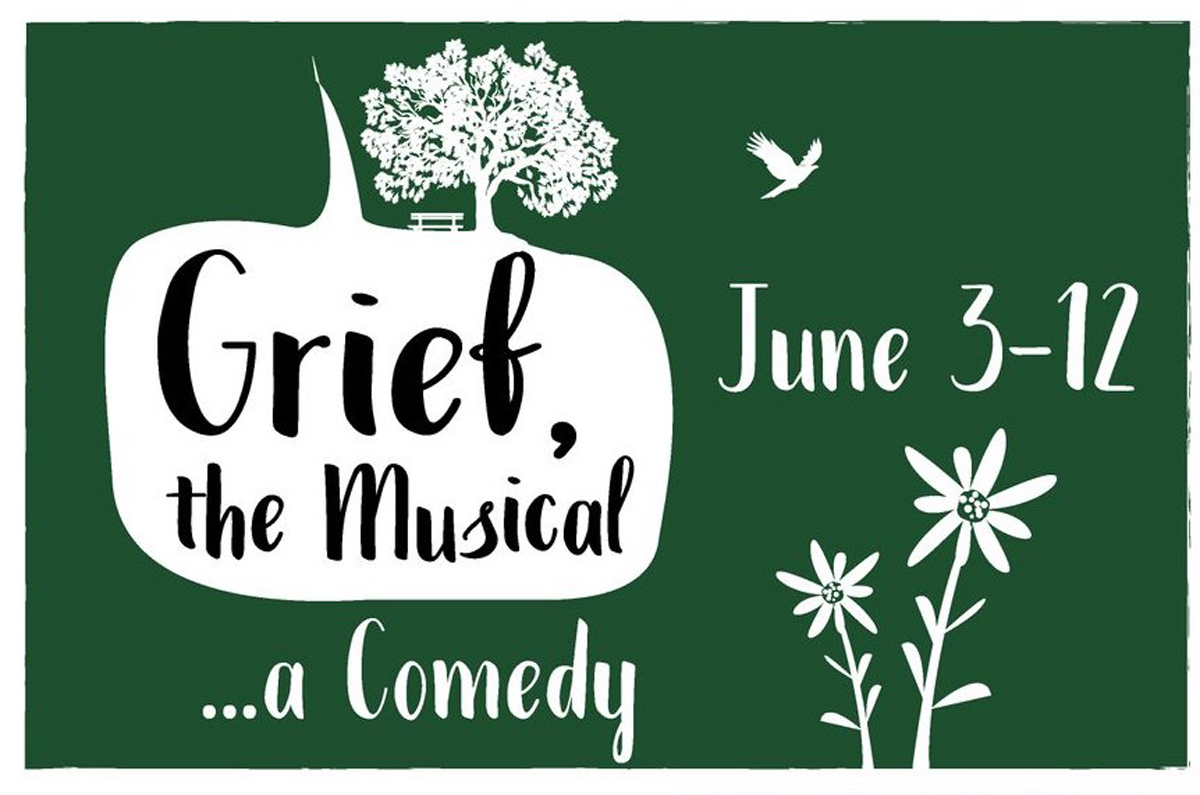 Great Barrington, MA [May 9, 2022] – When Alison Larkin told Archbishop Desmond Tutu about what happened after she fell in love for the first time in her 50s and the worst happened, he said “Alison, you must tell this story, because it is full of hope and joy.”

Alison Larkin, who lives in the Berkshires, Massachusetts, is an internationally acclaimed British comedienne, award-winning audiobook narrator and producer, playwright, TV writer, and actress. She is the author of The English American, a bestselling autobiographical novel based on her first one-woman show of the same title, which The Times (London) called “hugely entertaining, marvelously light-footed… a lesson in the human condition.”

Now, Alison has created a sparkling, buoyant new solo show, GRIEF: THE MUSICAL…A COMEDY which kicks off the Great Barrington Public Theater’s Solo Fest from June 3 to 12 in the Liebowitz Black Box Theater.

After raising her two children in the Berkshires, Alison Larkin braved the local dating scene in her 50’s and fell in love with Bhima, a brilliant Indian scientist, passionate about the issue of climate change. In GRIEF: THE MUSICAL…A COMEDY, Larkin turns their deeply funny, moving love story into an effervescent comedy of joy, loss, and redemption.

Larkin is known for finding humor in the most challenging of events. Her new show is a daring blend of stand-up comedy and theater, with songs written by Alison and her onstage accompanist, the Emmy Award-winning composer Gary Schreiner. James Warwick directs.

Written and performed by Alison Larkin

Alison Larkin (Author & Performer) is an internationally acclaimed comedian, award-winning audiobook narrator, t.v. comedy writer and the bestselling author of  The English American, a novel which sprang from her first autobiographical one woman show of the same name. Adopted by very English parents, after finding her birth mother in Tennessee, Alison moved to America and became a stand-up comic, because what else do you do? She appeared on Broadway with the Royal National Theatre and off Broadway with the Royal Shakespeare Company. She headlined at the Comedy Store in LA and spent three years in Los Angeles under Hollywood development contract with ABC to star in her own sitcom. Her first show was performed at the Assembly Rooms and the Soho Theatre in London. It was later seen in concert performances on both sides of the Atlantic raising hundreds of thousands of dollars for adoption related organizations.

Alison moved to the Berkshires with her two children in 2010. Since then she has narrated over 200 audiobooks, including the Complete Novels of Jane Austen which is the #1 bestselling Austen audiobook in the world. Her audiobook company Alison Larkin Presents has produced almost 100 audiobooks and won 13 AudioFile Earphones awards for Alison herself and others including Golden Voice narrator Simon Jones and Virginia McKenna. Alison was planning a life in England and India with her fiancé Bhima Nitta, but he died suddenly in August 2020 so now she lives with her rescue dachshund Charlie pondering what to do next. Meanwhile, the t.v. comedy series she is co-writing with screenwriter Lucy Shuttleworth is under development, her audiobook production of Moby Dick is a 2022 Audie award finalist, and her narration of Pride and Prejudice with Songs from Regency England can be heard worldwide on Audiobook Break podcast. http://www.alisonlarkin.com/

Gary Schreiner (Composer) is an Emmy award-winning composer, producer and arranger and lives in New York City. He has performed at Carnegie Hall with Elton John and Rosanne Cash and has performed or recorded with Joan Osborne, Yoko Ono, Chris Rock, Dave Chappelle, Patti LaBelle and Kermit the Frog. His music has been featured on countless t.v. shows including Oprah Winfrey, the X-files, and Chappelle’s show. With his co-writer Curt Sobel, Gary has written music for 23 feature films including Ray, Donnie Brasco, and I Am Sam with Sean Penn. In theater, he scored Alison Larkin’s hit one woman show, The English American and collaborated with Emmy award winner Electric Black on three Off Broadway productions. Gary recently produced and arranged Aztec Two Step’s recent album, Naked as well as Rick Moranis’ album My Mother’s Brisket & Other Love Songs. Gary is also an inventor and curator of his own food museum, and is currently developing a one way Ziploc bag for people on diets. www.garyschreiner.com

James Warwick (Director) played leading roles in London’s West End and in UK regional theatre before becoming a US resident 20 years ago. He has received BAFTA, Spotlight, Helen Hayes, Berkshire Eagle and Ovation awards for his theatre and television work. James played Sir Robert Chiltern on Broadway in An Ideal Husband and in many leading parts for PBS Masterpiece Theatre, including Tommy Beresford in Partners in Crime, currently being shown again on Amazon Prime. In 2018, he directed Mothers and Sons for S&C, receiving an Outstanding Director award from Berkshire Theatre Critics Assn. In 2019, he directed The Children, also for S&C and again nominated as outstanding director. He has recorded many audiobooks, receiving an Audiophile award for The Portrait of Dorian Gray last year. Last Fall, James directed Ionesco’s The Chairs here and this year opens the Great Barrington Public Theatre season with Alison Larkin’s solo show, Grief the Musical, followed by Lee Blessing’s eerily prophetic play ‘A Walk in the Woods’ featuring Allyn Burrows and Jonathan Epstein. The play runs from mid July to early September and marks James’ fifth season at Shakespeare and Co.