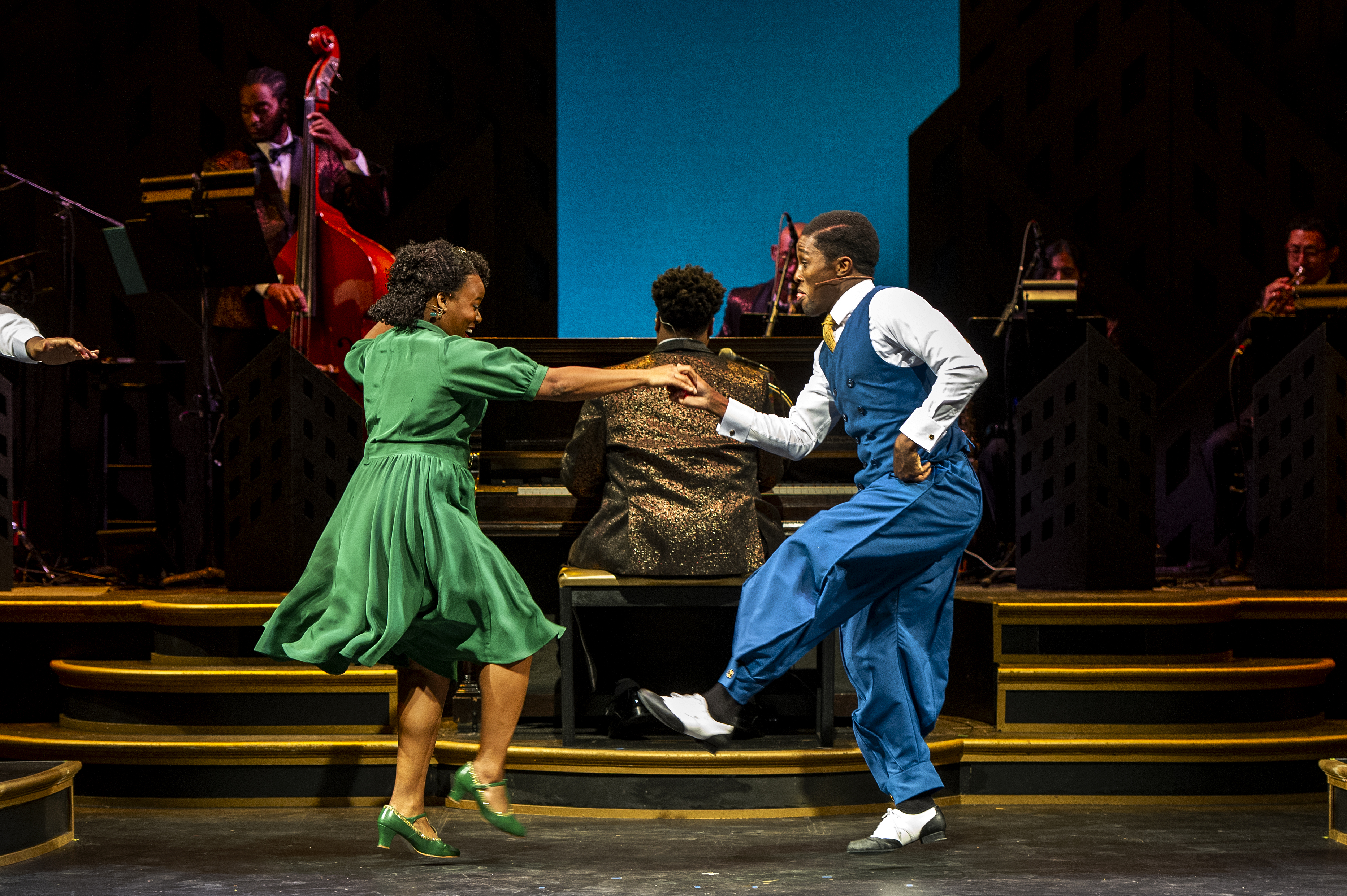 After two years of planning, AIN’T MISBEHAVIN’, The Fats Waller Musical Show has finally arrived in Pittsfield and it was well worth the wait.  Thanks to the director/choreographer Jeffrey L. Page and his dazzling team of artists both onstage and off, Barrington Stage Company has opened its mainstage season with a success that will be difficult to match.

Conceived by Richard Maltby, Jr. and Murray Horwitz, created and originally directed by Richard Maltby, Jr., the Tony Award-winning musical opened on Broadway in 1978 with a cast of now familiar black performers, including Nell Carter, Ken Page (the original Old Deuteronomy in Cats), Andre de Shields and Charlayne Woodward.  Its revival at Barrington Stage Company has been directed and designed by a company of artists who have studied the play through a different lens.

This exuberant musical, a revue containing thirty songs associated with Thomas “Fats” Waller (composer, lyricist, stride pianist par excellence), features an ensemble of five terrifically talented singer/dancers who tell their stories wearing imaginary, performative masks.  Program notes explain W.E.B. DuBois’ idea of “double consciousness”:  these artists perform both as themselves and by means of the masks, as the characters we want them to be. Though the audience is caught up in the pulsing rhythms and the joy of watching these consummate professionals, they don’t see the toll it took for black entertainers during the Harlem Renaissance (1920s and 1930s) to be playing stereotypical roles which do not represent them at all.  Director Page, a student of African masked storytelling, is determined to change this.

Page places the first act in the Savoy Ballroom, “Harlem’s legendary dance hall where Black singers performed for a Black audience,” rather than the famous Cotton Club, where the audience was white.  Under a portal made up of concentric arches decorated with African masks, set designer Raul Abrego creates a glittering gold and black upper stage, colorfully lit by Tom Ontiveros, and dominated by a movable piano played by the gifted Musical Director/Conductor Kwinton Gray in a gold lame jacket, his back to the audience.  Gray is accompanied by a lively five-person band further upstage, while the lower stage is reserved for the performers, who, in a nod to Brecht, remain visible between songs, hanging out in each of two bars in the corners of the set.

Waller, “one of the first Black superstars in America,” practiced the art of “double-edged lyrics,” enabling him to express the truth couched in a joke.  Though many of the songs and dances in this first act seem light-hearted, signs of the masks are nevertheless present.  They can be seen in a repeated gesture (arms bent at the elbows framing the face, palms outward, fingers spread wide, broad smile) reminiscent of Al Jolson in blackface with white gloves and the unfortunate minstrel shows of the nineteenth and early twentieth centuries, in which black performers blackened their own faces and enacted demeaning Jim Crow stereotypes for white audiences.  In the final song of the act, “The Joint is Jumpin’,” the lyrics refer to weapons, drugs, an imminent police raid and this statement:  “We’re all bums when the wagon comes.”

The second act takes place in the Waldorf Astoria, where black artists would never be allowed to stay. According to the program, the performers are “Leaving Harlem and trying to mix with the Hoity-Toity,” which leads to the wonderful parody “Lounging at the Waldorf.” But the masks worn by the characters are starting to come off in several songs that reflect negative attitudes towards black men:  “The Viper’s Drag/The Reefer Song,” “Your Feet’s Too Big,” “You’re Mean to Me,” and That Ain’t Right: women singing about unfaithful men who steal from them. The last two songs: “Fat and Greasy” and “Black and Blue,” sung just before the finale, show us the pain of these artists, now maskless. Arnold Harper II admits in a talkback that “Fat and Greasy” is the most difficult song for him because of its cruelty–akin to the “N” word.  In “Black and Blue,” the director wisely has the cast seated, singing simply:  “I’m white, I’m white inside, inside/But that don’t help my case/’Cause I, ‘cause I can’t hide /What is on my face, oh!”

The performers are uniformly excellent, moving seamlessly from comedic to serious songs, from blowing-the-roof-off energy to quiet moments. Particularly noteworthy song interpretations include Jarvis B. Manning, Jr., a sensational dancer, in “The Viper’s Drag;” Maiesha McQueen and Allison Blackwell in “Find Out What They Like,” discussing how to keep a man; Anastacia McClesky and Manning bringing the house down with their Jitterbug; Arnold Harper II in “Your Feet’s Too Big” and “Fat and Greasy,” and the whole cast imitating musical instruments during the rousing finale.

How to describe the sensational costumes designed by Oana Botez? Ladies in shades of green, orange, yellow, men in zoot suits, gold and rhinestones everywhere, furs, feathered coats, wild hats, all sparkling, all of them gems.  Just like the songs and the performers in this glorious musical.

AIN’T MISBEHAVIN’, The Fats Waller Musical Show runs from June 16-July 9 on the Boyd-Quinson Stage.  Tickets may be purchased by calling 413-236-8888 or online at barringtonstageco.org/Tickets.