Cast Announced for Shakespeare & Company’s “Much Ado About Nothing” 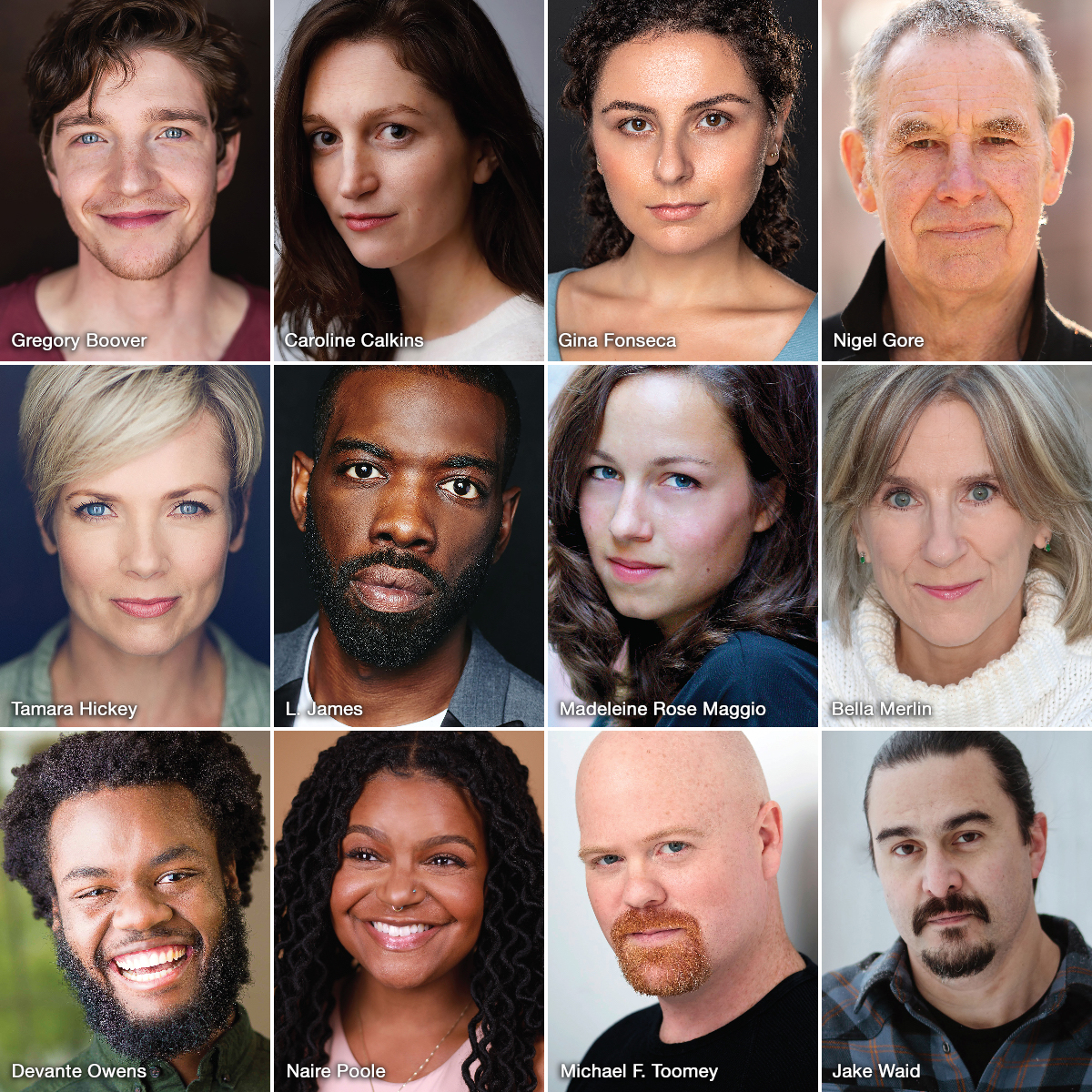 Cast Announced for Shakespeare & Company’s “Much Ado About Nothing”

LENOX, Mass. – Shakespeare & Company announces the cast of Much Ado About Nothing by William Shakespeare, to be staged outdoors at the Company’s New Spruce Theatre, July 2 through August 14.

Directed by Kelly Galvin, Much Ado About Nothing is a celebration of true love, friendship, and comedy that features some of Shakespeare’s most satisfying language.

As Count Claudio falls in love with Hero, the daughter of his host, Hero’s cousin Beatrice and Benedick – a bachelor – are each duped into believing the other is in love with them. Meanwhile, Claudio is deceived by a plot that suggests Hero has been unfaithful. Will courage, wit, and compassion reveal the truth of their circumstances?

Generously Sponsored by Howard and Natalie Shawn, Much Ado About Nothing will be shown at The New Spruce Theatre with tickets ranging from $37 to $82; preview performances are $10 less and student tickets are $22. For more information and to purchase tickets, visit the Ticket page or call the Box Office at (413) 637-3353.

The 45th Season’s cast of Much Ado About Nothing features:

Boover has worked with many theaters across the Northeast, including Shakespeare & Company, Urbanite Theatre, The Theater at Woodshill, The Umbrella Stage Company, Berkshire Playwrights Lab, WAM Theatre, Emergent Ensemble Theater, The Theatre at Monmouth, and Hampshire Shakespeare, in addition to teaching with Community Access to the Arts, The Berkshire Music School, and in the Education program at Shakespeare & Company.

Calkins is an actor and teacher in Shakespeare & Company’s Education Program, having directed in the Fall Festival of Shakespeare and performed in the Northeast Regional Tours of Romeo & Juliet, Midsummer Night’s Dream, and Macbeth. She has recently performed at Boston Playwrights’ Theatre and the Theater at Woodshill. Calkins is also a collaborator with the rig, an arts collective based in the Berkshires.

Hickey is currently devising her own solo show called This Is It, which will appear at the United Solo Festival in New York City this fall, as well as at Shakespeare & Company as part of the Plays in Process series, where she’s also appeared in Time Stands Still, Heisenberg, Cymbeline, The Tempest, Merchant of Venice, and Two Gentlemen of Verona. In regional theater: Appropriate, SpeakEasy Stage; God’s Ear, for which she won an Elliot Norton Award for Best Actress and Best Production; Henry VIII, Pericles, and Living In Exile, all for Actors’ Shakespeare Project; Rancho Mirage, New Repertory Theatre, and Cabaret, American Repertory Theatre (IRNE Award Best Ensemble). In film and television, Hickey has been seen in Mother/Android, John And The Hole (2020 Cannes/2021 Sundance), The Equalizer 2, Chappaquiddick, Good Kids, The Judge; “Defending Jacob”; “Bull”; “The Secret Life Of Marilyn Monroe”; “Olive Kitteridge”; “Chasing Life”, “The Makeover”, “Army Wives”, “One Life To Live”; “Blue Murder (Series Lead), and “The Associates” (Series Lead). She holds an MFA from American Repertory Theatre.

James’ credits with Shakespeare & Company include Art and Knock Me A Kiss. Television credits include: FBI, and other theater credits include Sender, The Merry Wives of Windsor, Intimate Apparel, Hamlet, Sweat, The MotherF@cker with the Hat, ThreePenny Opera, Ideation, and Angels in America.

Maggio has performed with Shakespeare & Company as Cassie in The Wickhams: Christmas at Pemberley, and in ensemble in Shakespeare and the Language that Shaped a World, Marianne Dashwood: Sense & Sensibility; Robert Shallow/Bardolph: Merry Wives; Elizabeth Bennet: Pride & Prejudice; Longaville/Jaquenetta, Love’s Labor’s Lost; Elizabeth Darcy, Miss Bennet: Christmas at Pemberley; Helena/Cobweb, A Midsummer Night’s Dream. On the Shakespeare & Company Regional Tour, she played Lady Capulet/ Benvolio, Romeo & Juliet, and with The Humanist Project: Lavinia, Titus Andronicus. Maggio is also an education artist in the Fall Festival of Shakespeare, and with Shakespeare & Young Company.

Owens’ recent credits include Ade, The Easiest Thing (The Tank, New York City debut), and Burgundy, King Lear (starring Christopher Lloyd), Lucentio, The Taming of the Shrew, Dumaine, Love’s Labor’s Lost, Theseus, A Midsummer Night’s Dream, ensemble, I HAVE HAD A MOST RARE VISION, and ensemble, Shakespeare and the Language that Shaped the World – all Shakespeare & Company.

Poole is a Virginia-born, New York-based actor, director, teaching artist, and organizational artist. Before returning to the stage this summer, Poole recently served as director and editor of a full-length film adaptation of Jessica Posey’s Boring Black Play for White Mouse Productions and will continue contributing to productions that broaden the current perceptions of marginalized groups and awaken communal empathy.

Toomey is a Brooklyn-based actor and creator. He has been a member of Shakespeare & Company since 1998. Numerous roles at Shakespeare & Company include Serg (Art), Puck (Midsummer Night’s Dream), The Poet (An Iliad), Bassinet (Ladies Man), Scapan (Scapan), Walter (Split Knuckle’s Endurance). Various Roles in New York City include Francis (Francis Goes To War), Francis (Heisenberg Uncertainty Principle), Macbeth (Macbeth). He is the Artistic Director of The Humanist Project and a founding member of Split Knuckle Theatre. Toomey directs at the American Academy of Dramatic Arts where he teaches Shakespeare and Fight. He has directed or devised many shows including Titus Andronicus, Julius Caesar, and Alice In Wonderland. He teaches clowning to professional performers throughout the country.

Waid was last seen at Shakespeare & Company in 2009 as Horatio in Hamlet and Sebastian in Twelfth Night. He played the title roles in Hamlet and Henry V, Hal in Henry IV part I, and Brutus in Julius Caesar at Fairbanks Shakespeare Theatre. In 2007, he played the title role in Perseverance Theatre’s Macbeth, which, in partnership with The Kennedy Center and Shakespeare Theatre Company, was translated into his tribe’s Tlingit language and performed at The Smithsonian National Museum of the American Indian in Washington D.C. Most recently he originated the role of John Ross / Jim Ross in Mary Katherine Nagle’s Sovereignty at both Arena Stage and Marin Theatre Company. He has also worked with History Theatre, Pillsbury House, Working Class Theatre, La Jolla Playhouse, Native Voices at the Autry, and Notre Dame Shakespeare Festival.