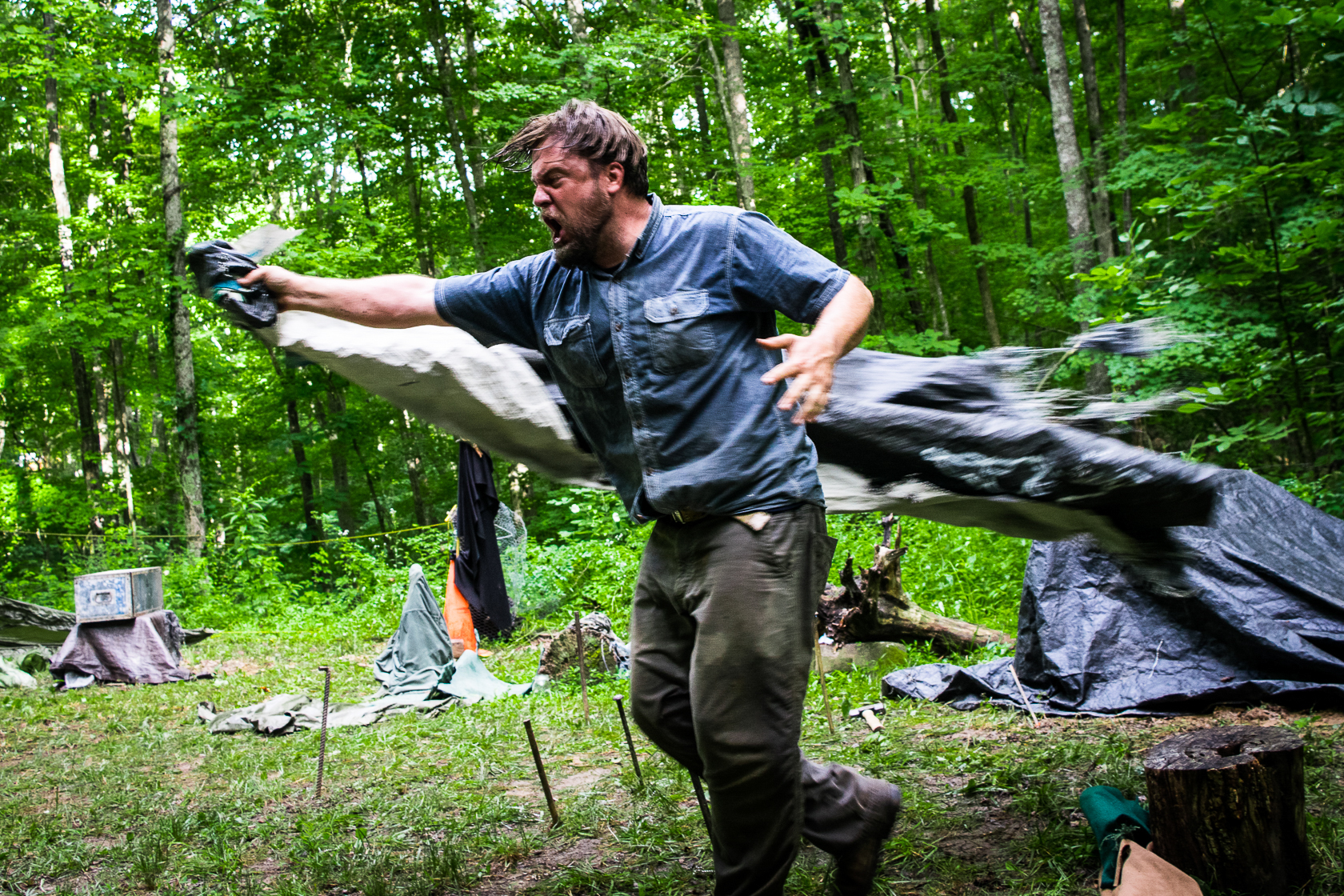 July 29-31, outdoors, on the Hampshire College Campus in Amherst, MA

Amherst, MA–The final summer season of the Ko Festival of Performance closes with “EZELL: Ballad of a Land Man,” which will be performed outdoors on the Hampshire College campus, July 29-31. An environmental, cultural, and spiritual parable of domination and resilience, “Ezell” explores the complexities of climate change, indigenous erasure, and environmental extraction (fracking). Ezell’s choices, traumas, and ancestors intersect with themes of domination and resilience as he seeks to take advantage of an anticipated fracking boom and the opportunity to reconnect with the people and land of his raising.

Carrie Brunk, “Ezell” producer and ensemble artist says, “The development and sharing of this theatrical work is an attempt to make plain and disrupt domination: to reveal the patterns of domination behavior within this character Ezell, within his relationship to others and the land, within his livelihoods and his ways of being, within his ancestry and his belief system. It is meant for everyone who witnesses it as a motivation to continue — or an invitation to begin — the work of discovering and disrupting domination within and around themselves and to do so as an act of love and liberation.”

This immersive experience features a guided walk through the woods to the performance site on land that is part of the Hampshire College Farm Center, with live music before the play. The performance site will have folding chairs and risers, with some ground seating available. Ko is dedicated to making this performance accessible. People with accessibility concerns should contact info@kofest.com in order to determine the best way of accessing the event. The play will be presented rain or shine; audience members are encouraged to bring umbrellas, ponchos, and appropriate footgear. After the show, attendees are invited to join the artistic team and a panel of local experts in the air-conditioned Mainstage Theater in Emily Dickinson Hall, for a post-show discussion on the issues raised by the play, and their local ramifications.

Performances of “EZELL: Ballad of a Land Man” are outdoors and timed with the sun. Audiences must pick up their tickets and gather at the Ko Festival Box Office at Emily Dickinson Hall on the Hampshire College campus in Amherst, MA, on Friday, July 29 by 6:15pm and Saturday, July 30 by 6:15pm. The Sunday, July 31 performance will be in the morning, with attendees picking up their tickets by 10:15am. If there is lightning or a severe downpour slated for one of our performance times, a rain date is scheduled for Sunday, July 31 at 6:15pm. Tickets are available at three different choose your price levels: $30 Patron, $22 Standard, $10 Discount. Further information and tickets are available at kofest.com. The Box Office Phone line (413) 559-5351 opens July 18.

JEFF BECKER is a designer, director and sculptor who specializes in audience interactive performances and outdoor spectacles. His work focuses on issues surrounding racism, abuse of power and environmental justice. He has toured extensively nationally (his designs for “Loup Garou” amazed Ko audiences in 2010) and abroad and is the recipient of numerous awards and grants. Jeff is the co-founder of Catapult, a performance laboratory in New Orleans dedicated to the development of original theatre and innovative design. setsalive.com

CARRIE BRUNK lives and loves in the foothills of Appalachian Kentucky where she co-stewards a solar-powered off-grid farm, artistic venue and eco-cultural retreat through Clear Creek Creative. She finds joy and curiosity in the garden and in a wide range of creative endeavors —writing, ritual, pottery, costuming, spatial design, culinary and healing arts. In her spare time, she works as a facilitator, educator, producer and somatic coach for transformative personal and systems change. clearcreekcreative.net

BOB MARTIN Robert (Bobby B Martin) lives and works in the foothills of Appalachia on Clear Creek in Disputanta, Kentucky. He is creatively engaged with the ancestors, the natural world, youth and those in service of stories that witness and transform the world around them. Hey internet! How do you make a living being a rural community theater artist/cultural organizer/producer/educator/land steward/rogue forest ranger? Best you can. Give thanks. clearcreekcreative.net

CORY SHENK often finds bios disappointing because they only tell him a few things that a person has done and not who they are, what their character is, or if and how they are elated or confused by existence. In spite of that, here is a tiny window into who he is: he enjoys being in the woods and liminal spaces, potlucks, Dairy Bar cuisine, dancing and porch sitting, and pondering and wondering at our strange existence. You can find his music on Spotify.

NICK SLIE is a New Orleans-born performer, producer and cultural organizer. He is the Co-Artistic Director of Mondo Bizarro and Professor of Theater at Nunez Community College. Since 2002, Nick has toured a wide array of imaginative projects to art centers, universities and outdoor locations in 38 states across the country (including his tour-de-force performance in “Loup Garou” at Ko in 2010) and abroad. However, he is most proud of the work he does at home in New Orleans, where the land kisses the water.  mondobizarro.org

We hope you can join us in a season of compelling performance, inquiry, and celebration!