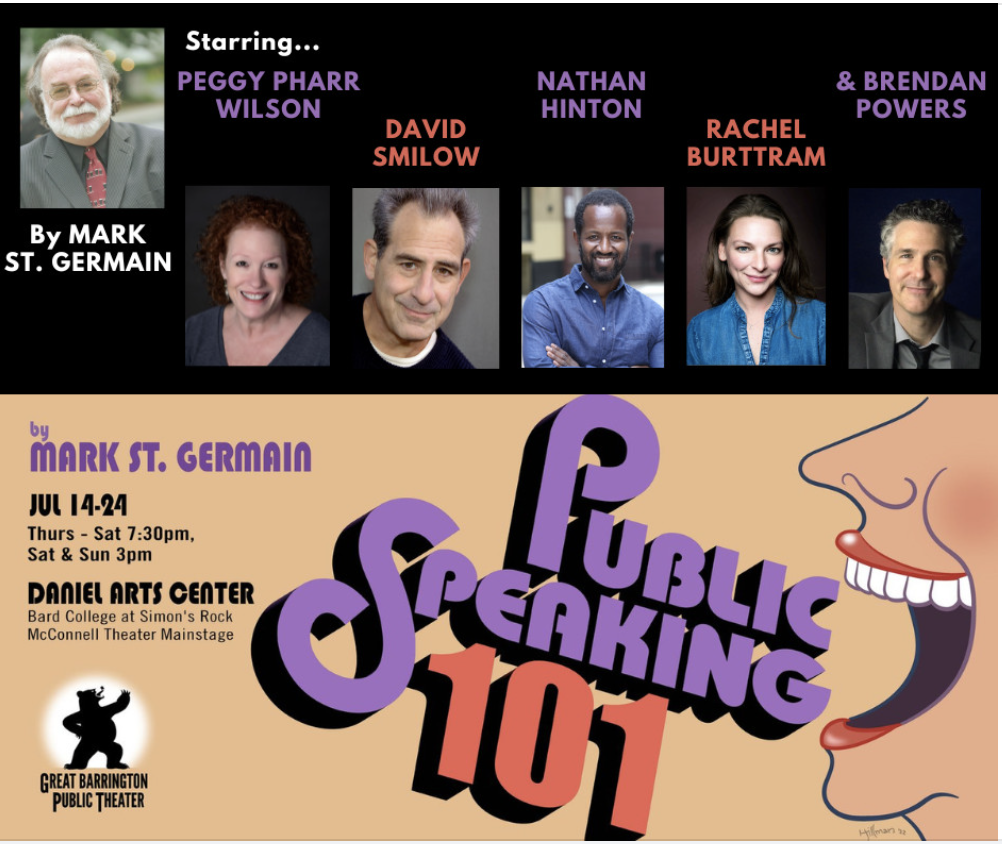 Audiences know and love Mark St. Germain’s quick, sharp dialogue and knotty situations where characters walk into quicksand of their own making and need to reach out to others for a lifeline. “Mark is a master at comic set-up, timing and real character quirks,” director Jim Frangione says. “He can come up with a very funny storyline, and no one gets out until the hang-ups are resolved. This time, Mark gives us a comedy with great heart. Speaking in public is number one phobia for almost everybody. For these people it’s absolute terror. We all know the moment, when we wish we would have said something but couldn’t find the words.” Frangione works closely with St. Germain and directed and played the title role in GBPT’s 2021 production of Mark’s comedy Dad. “It becomes more than a comic story about a classroom of mixed nuts and lost dogs. It’s about finding that sweet spot in your heart that lets you pump yourself up and show yourself off as the prize-winner we all know we are, no matter what. Mark has given us a feel-good story just when the world really needs one.”

As St. Germain explains it, “We have a pastor terrified of addressing his congregation and sings to them instead, a cop who dissolves on the witness stand, a mortician more comfortable with the dead than the living and a writer whose every word sounds like drying paint, taught by Sunny Strutt, an aspiring community theater actress whose offstage life is falling apart. It takes us into the hearts of a misfit class struggling to find their own voices.”

Nathan Hinton* (Reverend Montavius Lester) has performed at some of the most respected and emerging theater companies in the country. He began his career at Joseph Papp’s Public Theater and in 2017 realized a personal dream by playing Zachariah in Athol Fugard’s Blood Knot at the Mosaic Theater Co., directed by Joy Zinoman. He played Memphis in Two Trains Running (Triad Stage) and Jon in Marjorie Prime (Pittsburgh Public Theater). He appeared in the world premiere of Jeff Augustin’s Where the Mountain Meets the Sea at Actors Theatre of Louisville. He has performed at Shakespeare Theatre Co., Berkeley Repertory Theatre, Dallas Theatre Center, and Huntington Theatre. He was in the first national touring company of Angels in America, won the Barrymore Award for Take Me Out at Philadelphia Theatre Co., and received an Audelco Award nomination for Living in the Wind at American Place Theatre. Television credits include The Equalizer, FBI: Most Wanted, Manifest, and Madam Secretary. He is a member of Actors’ Equity, the Screen Actors Guild, and The Actors Center.

Brendan Powers* (Fletcher Tuft) Regional theatre credits include Boston Theatre Marathon, Gloucester Stage, North Shore Music Theatre, Penobscot Theatre, Seacoast Rep, Hangar Theatre, Kitchen Theatre, and Florida Repertory Theatre.  Recent roles include Sam Phillips in Million Dollar Quartet, Torvald in A Doll’s House Part 2, Phileas Fogg in Around the World in 80 Days, Anthony in Outside Mullingar, Alan in God of Carnage, and the Stage Manager in Our Town. In 2020 he and his wife, Rachel Burttram, turned a bedroom closet into a tiny theatre (www.tiny-theatre.com) and landed a feature article in American Theatre Magazine. Thanks Jim, Mark, GBPT and all who support the arts!

David Smilow (Sergeant Mike Gallion) is fortunate to be appearing in his third premiere of a Mark St. Germain play, having performed in Dad  last season at GBPT and Wednesday’s Child a few seasons back (a lifetime bordering on eternity in COVID-19 terms) at the Florida Studio Theatre in Sarasota. A relatively recent arrival to acting after a long writing career, he’s taken on roles ranging from Heisenberg in Copenhagen, to Serebriakov in Uncle Vanya, Orgon in Tartuffe, and the besieged college professor, John, in David Mamet’s Oleanna. David has also played another species onstage—specifically Canus—having appeared as a dog in two different plays. As a writer, his work earned him multiple Emmy and Writers Guild awards during stints on such venerable (and now departed) shows as One Life to Live, Guiding Light, and As the World Turns.  David lives in the Hudson Valley, having survived residency in both Los Angeles and New York City.

Mark St. Germain’s new comedy DAD was staged in 2021 at Great Barrington Public Theater. His short movie THE REJECT  was featured in Berkshire Outdoor Shorts, produced by Great Barrington Public Theater and the Berkshire Film & Media Collaborative. His play ELEANOR, about Eleanor Roosevelt, premiered in 2021at Barrington Stage Company, followed soon thereafter by another new work, CROSSING-A DANCE MUSICAL. He also wrote the plays FREUD’S LAST SESSION (Off Broadway Alliance Award), CAMPING WITH HENRY AND TOM (Outer Critics Circle Award and Lucille Lortel Award) FORGIVING TYPHOID MARY, (Time Magazine’s “Year’s Ten Best”) and BECOMING DR. RUTH. With Randy Courts, they have written the musicals GIFTS OF THE MAGI, JOHNNY PYE and JACK’S HOLIDAY. With John Markus he wrote THE FABULOUS LIPITONES. Mark co-wrote the screenplay for Carroll Ballard’s Warner Brothers film, DUMA. He directed and co-produced the documentary, MY DOG, An Unconditional Love Story, featuring Richard Gere, Glenn Close and Billy Collins, among others. Mark is an Associate Artist at the Barrington Stage Company. In 2010, Barrington Stage named their second stage “The St. Germain Stage.” His play FREUD’S LAST SESSION will soon be a film, starring Anthony Hopkins, and a screen adaption of his play THE GOD COMMITTEE starring Kelsey Grammer and Julia Stiles can be seen on Netflix.

Jim Frangione (Director)) Last summer with the Public, Jim directed Mark St. Germain’s new play, Dad, as well as the East Coast premiere of David Mamet’s, The Christopher Boy’s Communion. He directed Anne Undeland’s play, Lady Randy, for WAM Theatre; Romance at Wellfleet Harbor Actors Theater; Private Life at HERE Arts in NY; and An Evening of Shorts by Mamet, Pinter and Silverstein at the ART/Harvard Institute for Advanced Theatre Training. Jim’s play, Flight of the Monarch, premiered at Gloucester Stage Company in 2017. His play, Breakwater, the second in a trilogy of Cape Cod plays, received its premiere in 2019 as part of Great Barrington Public’s inaugural season (Berkshire Theatre Critic’s Nomination). Jim has acted for over 35 years; On and Off-Broadway, in National Tours; in many plays with the Atlantic Theater Company and at regional theaters such as: The Mark Taper Forum, Long Wharf, The Alley Theater, Berkshire Theatre Festival, The Humana Festival of New Plays—most recently in Prairie Du Chien at Atlantic and Vanya and Sonia and Masha and Spike at Shakespeare & Company. Films: Joy, Transamerica, Spartan, Heist, State and Main, The Spanish Prisoner, Homicide, Suits, Claire Dolan and Maryam.