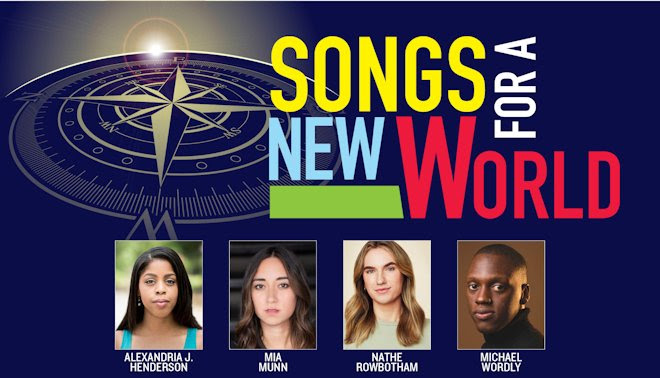 Songs For a New World

directed and choreographed by Gerry McIntyre

It’s about one moment. It’s about hitting the wall and having to make a choice or take a stand or turn around and go back. These are the stories and characters of today, the Songs for a New World. The first musical from Tony Award winner Jason Robert Brown (Parade, Bridges of Madison County), this moving collection of songs examines life, love and the choices that we make.

With a small, powerhouse, multi-ethnic cast and a driving, exquisitely crafted score that runs the gamut of today’s popular music, Songs for a New World brings us face to face with those moments in life when everything seems perfect and then goes sideways. Most importantly, however, it’s about surviving those moments. It’s about the way we regroup and thrive under a new set of circumstances—a new world—even against seemingly overwhelming odds.

ABOUT THE ARTISTS:
Alexandria J. Henderson (Company Member #1) holds a BA in Music and is a graduate of the Atlantic Acting School’s inaugural Global Virtual Conservatory. Select credits include: Lorrell Robinson in Dreamgirls (Outstanding Supporting Actress in a Musical Gregory Award), Lydia Languish in The Rivals; and Billie Holiday in Lady Day at Emerson’s Bar and Grill. She/her.

Mia Munn (Company Member #3) is thrilled to be joining the cast of Songs For A New World! Off Broadway: Islander (US Premiere). Regional: American Idiot, Oklahoma City Philharmonic’s The Christmas Show. Other favorite credits include: She Loves Me, Songs For A New World and Cabaret. Mia is a proud 2022 graduate of the University of Oklahoma with a B.F.A. in Musical Theatre Performance.

Danté Harrell (Musical Director/Pianist) graduated from North Carolina Central University (NCCU) and earned a Bachelor of Arts in Music with a concentration in Performance. At NCCU Danté studied voice and conducting with Richard Banks, composition with Dr. Lance Hulme, opera performance with Elvira Green and coached with Maestro William Curry of the Durham Symphony. Danté’s most recent accomplishments include: a socially distant cabaret at Chez Josephine NYC, a Carnegie Hall debut as Chorus Master for Beethoven’s An Die Freude and a very successful Japanese tour with The New York Gospel Brothers. Danté holds a Masters of Music degree in Performance from Norfolk State University, where he studied voice with Gregory Gardner and piano with Dr. Susan Ha. Currently, Danté is a Professor of Music at Essex County College, serves on the Board of Directors for Harlem Opera Theater and is the Founder and Artistic Director of Carpenter Productions.

Kaique “Kai” De Souza (Sound Designer) is honored to be back sound designing Songs For A New World, having previously been the Audio and Projections Supervisor here at BTG. An East Coast based sound designer, musician and audio engineer, he is currently working as the sound engineer at McCarter Theatre Center in Princeton, NJ. Past BTG productions include: The Wizard of Oz, Nina Simone: Four Women, Godspell and the Holiday Extravaganza TV broadcast in 2020, which featured one of his original compositions. TheatreZone, FL: Amadeus, Secret Garden. Gulfshore Playhouse, FL: Little Mermaid Jr., Les Miserables.

Caroline Stamm (Performance Stage Manager) Originally from central North Carolina, Caroline relocated to the beautiful Berkshires to continue pursuing her career in Stage Management with Berkshire Theatre Group. Recent BTG credits include: Footloose (SM), Magic Tree House: Dinosaurs Before Dark (SM), White Christmas (PA), The Wizard of Oz (SM), Holiday Memories (PA), Godspell (PA), A Christmas Carol (2019 SM, 2018 SM, 2017 ASM), Other favorite regional credits include: The Barber of Seville (ASM) at The Greensboro Opera and Beautiful Star (ASM) at Triad Stage. Caroline is a graduate from the University of North Carolina at Greensboro (‘17), where she obtained her BFA in Technical Production (with an emphasis in Stage Management) and minored in American Sign Language.

Diego Mongue (Drums) This passionate lover of all things musical garnered his first drum kit at the age of 5, and it’s been a steady ascent ever since. He is the youngest member of the 2019 International Blues Challenge finalist, Misty Blues, and the founder of the jazz fusion group GrossMongue. In the summer of 2021, Diego was the featured percussionist for the Berkshire Theater Group production of Nina Simone: Four Women. Diego has performed on stages from Memphis, TN to Ontario Canada. He has performed with groups that have opened for Lucinda Williams, Roomful of Blues, Tab Beniot, and Albert Cummings. He has performed with Fountains of Wayne co-founder Chris Collingwood and recorded with Joe Louis Walker, Big Llou Johnson, and Justin Johnson. He is a multi-instrumentalist and composer with songs that have hit the top of the Roots Music Report Charts in contemporary blues, blues rock, and jazz fusion. Diego is a first-year music major at Williams College.

Alan Filderman (Casting Director) This is Alan’s 30th season casting for Berkshire Theatre Group, where he also directed You’re A Good Man, Charlie Brown and Godspell. Casting credits include Broadway and Off Broadway: 33 Variations, Grey Gardens, Marie Christine, Master Class, Once on This Island, Fiorello, Dessa Rose, Here Lies Jenny, A New Brain, A Beautiful Thing, Three Tall Women, From the Mississippi Delta, Song of Singapore, The Sum of Us. In addition, Alan has cast for regional theatres all over the country. Films include: Ice Age, Broadway Damage and Anastasia.

Tickets for all of BTG’s exciting summer season productions are on sale now. All plays, schedules, casting and prices are subject to change. To purchase tickets, visit www.BerkshireTheatreGroup.org or contact the Colonial Ticket Office by calling 413-997-4444.

The ticket office is open Tuesday through Sunday 12pm-5pm or on any performance day from 12pm until curtain.