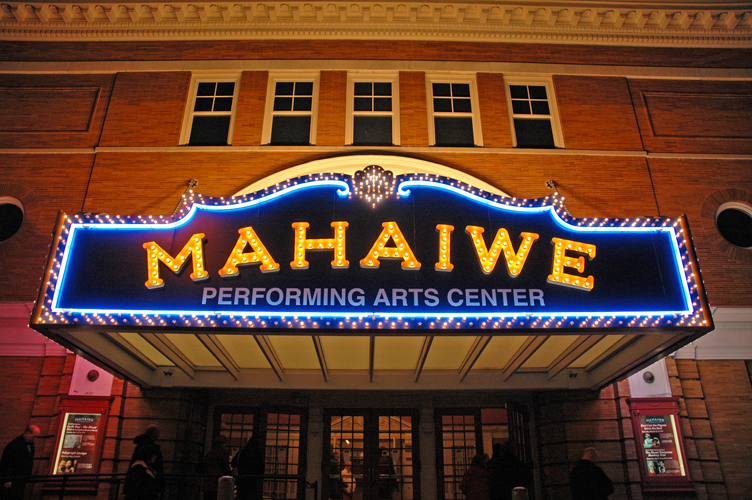 “The Mahaiwe never stops rolling and these additions to our fall calendar speak to the widely varied program typical of this theater,” says Mahaiwe Executive Director Janis Martinson. “From the stylish world music of Pink Martini with China Forbes to the Ronnie Marmo performance directed by Joe Mantegna depicting Lenny Bruce, we swing from musical richness to theatrical depth. With the free Corey Zink concert and Spanish-language movies, we reach into our community. And with the ongoing National Theatre of London HD broadcasts, we bring one of the great performing arts houses of the world to our neighborhood.”

Mahaiwe favorite Pink Martini, featuring singer China Forbes, will return to the theater on Friday, October 28 at 8 p.m. Featuring a dozen musicians, with songs in 25 languages, Pink Martini performs its multilingual repertoire on concert stages on six continents. After making its European debut at the Cannes Film Festival in 1997 and its orchestral debut with the Oregon Symphony in 1998, the band has gone on to play with more than 50 orchestras around the world. The band has released 11 studio albums, selling over 3 million albums worldwide. Tickets range from $37 to $117, with discounts for Mahaiwe Members and ages 30 and under.

Critically-acclaimed actor Ronnie Marmo, with the blessings of Kitty Bruce (daughter of the late Lenny Bruce), along with the Lenny Bruce Foundation, present I’m Not a Comedian… I’m Lenny Bruce, directed by Joe Mantegna, on Friday, October 14 at 8 p.m. and Saturday, October 15 at 8 p.m. I’m Not a Comedian… I’m Lenny Bruce chronicles the life and death of the most controversial comedian and undisputed legend of all time, Lenny Bruce. His personal pain, sharply funny social commentary and completely original, freestyle comedy left a lasting impact on today’s poetry, politics, music, film — and of course — comedy.

Tickets range from $25 to $60, with discounts for Mahaiwe Members and ages 30 and under.

Corey Zink and Company will return to Great Barrington on Monday, October 10 at 4 p.m., for a free, outdoor country music concert behind Town Hall, across from the theater. A Berkshire native, Zink formed his band in Pigeon Forge, Tennessee, with classic country and bluegrass influences. This marks the second year in a row of collaboration between the Mahaiwe and Zink for a community concert. Blankets and lawn chairs are recommended.

First, the Mahaiwe will present Disney’s Encanto (2021) outside at the park behind Town Hall, across the theater, on Sunday, September 4 at 7:30 p.m. In this beautifully animated movie, Colombian teenager Mirabel navigates her world as the only child in her family without magical powers. Blankets and lawn chairs are recommended.

Then, on Saturday, October 29 at 7 p.m., the Mahaiwe will screen McFarland, USA (2015) inside the theater. McFarland, USA follows Jim White (Kevin Costner) in his new role as a running coach at a predominantly Latino high school in Southern California. While the coach and boys learn about each other, the team gets stronger and stronger, contending for the state championship. See mahaiwe.org/update for current safety protocols inside the theater.

Reservations are required for both events. Register at mahaiwe.org or via the Box Office, open Tuesday through Saturday from noon to 4 p.m., 413-528-0100.

The Mahaiwe will screen Jack Absolute Flies Again from London’s National Theatre in HD on Friday, October 7 at 7 p.m. After an aerial dog fight, Pilot Officer Jack Absolute flies home to win the heart of his old flame, Lydia Languish. Back on British soil, Jack’s advances soon turn to anarchy when the young heiress demands to be loved on her own, very particular, terms. Emily Burns directs this spectacularly entertaining new version of Sheridan’s The Rivals. Featuring a cast including Caroline Quentin, Laurie Davidson, Natalie Simpson and Kelvin Fletcher. Called “a knock-out new comedy by the writer of ‘One Man, Two Guvnors'” by Variety, its ending shows “true heart.” Tickets are $17 or $10 for ages 21 and under.

Tickets go on sale to Mahaiwe Members on Tuesday, July 26 at noon, and to the public on Thursday, July 28 at noon. See mahaiwe.org or call or visit the Box Office, open Tuesday through Saturday from noon to 4 p.m., 413-528-0100.