REVIEW: “Pass Over” at the Chester Theatre Company 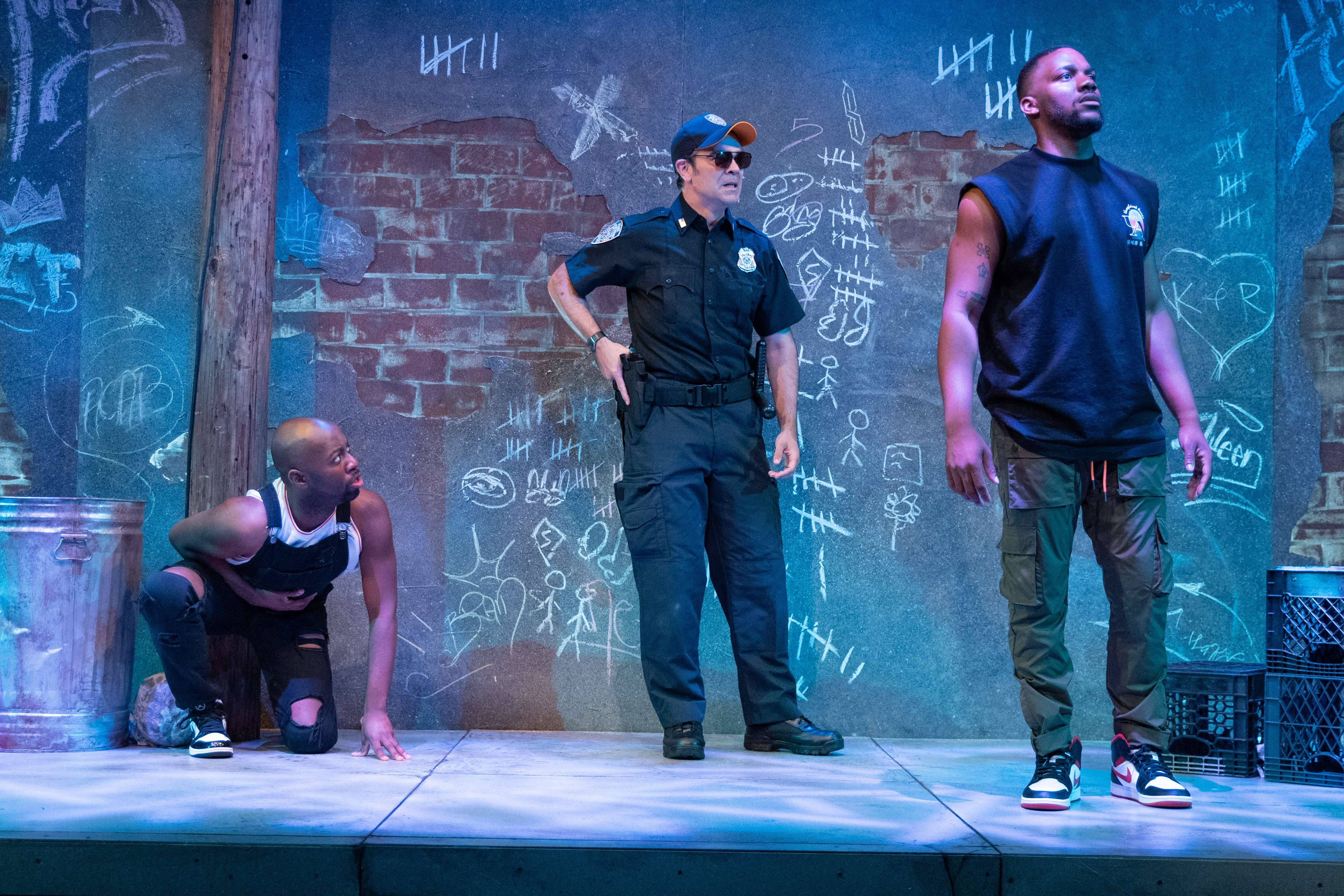 REVIEW: “Pass Over” at the Chester Theatre Company

Pass Over is a difficult but intriguing play receiving a dynamic production at Chester Theatre Company in Chester, Massachusetts.  There are comic moments, emotional confrontations and times of darkness.  It is also rife with various symbols and references. The play is a depiction of America’s black minority that lives in what they see as a police state where the burden of slavery sits on their shoulders and psychologically restricts their futures.  This is definitely a play of our time.

Two Black men, the single-minded Moses (Kayode Soyemi) and the acquiescent Kitch (Austin B. Sasser,) literally live on a street corner in a large city, probably Chicago.  They sleep on the sidewalk, sit on a covered trash barrel or a crate under a street lamp. They banter and trash talk with their obscenity-laced language and the repetitive use of the “N-word.”  They wrestle, they dance, they argue. They have been together for what seems like forever… the only family they really have.  There is little talk about their pasts but it includes a litany of the names of friends who have been killed by the police… an aspect of the thematic content.

Moses wants to start a new life.  But where is he going to go that will allow him to avoid the oppression that pervades America’s Black world?  He’s aware of that, but he says he has to pass over the proverbial hill to find a new life knowing that it will probably be no different.  Without using the phrase, he is referring to a Promised Land which may not exist… a similarity to the Book of Exodus in the Old Testament and Martin Luther King’s expectations of a better world.  Kitch repeatedly asks, “Where ya gonna go?”  Moses does not know, but he knows he has to get out of here instead of just waiting for something to come along.

This is, of course, redolent of Samuel Beckett’s “Waiting for Godot” where Vladimir and Estragon are waiting for they-know-not-what; they, however, are not victims of brutality and bias. Like Moses, they too wait and wait. Soon two men, Lucky and Pozzo, come along but do not offer them any solutions.  Later a boy arrives with a message that Godot will not be coming. Beckett’s play, as well as this one, explores the themes of cynicism and irrationality as well as deep and abiding friendship. We also learn about human nature, through the two plays, that holds on to hope even when it seems meaningless.

Moses and Kitch are also visited by two men.  The first is a prissy white man (James Barry) who has wandered into their world.  He tries to make friends by treating them as, he supposes, equals.  He offers them the food he was bringing to his mother before he got lost.  Kitch devours it while Moses, as an act of contempt, barely tastes it.  When Kitch asks his name the visitor replies “Master” at which the three recoil remembering what that represents… another allusion to slavery.  In that context the country seems to be a universal plantation.

A cop, (also played by Barry) who obviously knows Moses and Kitch, arrives.  They are leery and rightfully so as no one in that neighborhood can ever predict if it will be a good or bad cop.  The two Blacks are somewhat subservient not wishing to antagonize him. Though the cop is quite stern he does not harass them and soon departs.  He reappears as Moses and Kitch are preparing to leave.  His manner this time is quite different in that he degrades and physically attacks them.

The play originated at the Steppenwolf Theatre in Chicago in 2017 and then at Lincoln Center in 2018, the Broadway revival was in 2021.  Nwandu has written three different conclusions.  For this one the ending is dramatic and then it closes with a subtle but chilling final speech.

As emotionally charged as the play is the acting gives it a depth and intensity that draws the audience into the lives of Moses and Kitch. We believe in the love and dependency they have for each other and the hopelessness that victimizes them.  In lesser hands much of their dialogue would be melodramatic. Each of Barry’s two characters is a powerful contrast that emphasizes the thematic statements.  The three actors bring a mesmerizing life to this rich drama.

Nadir Bey has created a stark set.  There are various markings on the wall of the corner.  The few set pieces are dark and there is virtually no color to be seen.  The whole atmosphere feels heavy and forbidding.  The light design by Madeleine Hebert complements the set.  Much of the lighting is subdued adding to the ominousness of the plays tone.  The costumes of Sarafina Bush for the three civilians reflect their status in the world.  James McNamara’s sound is unobtrusive, but it, too, adds to the shadowy atmosphere of the play.

Pass Over — the play and the production — is another example of the high quality of Chester’s work and their dedication to presenting provocative material.