REVIEW: “The Full Monty” at the Mac-Haydn Theatre 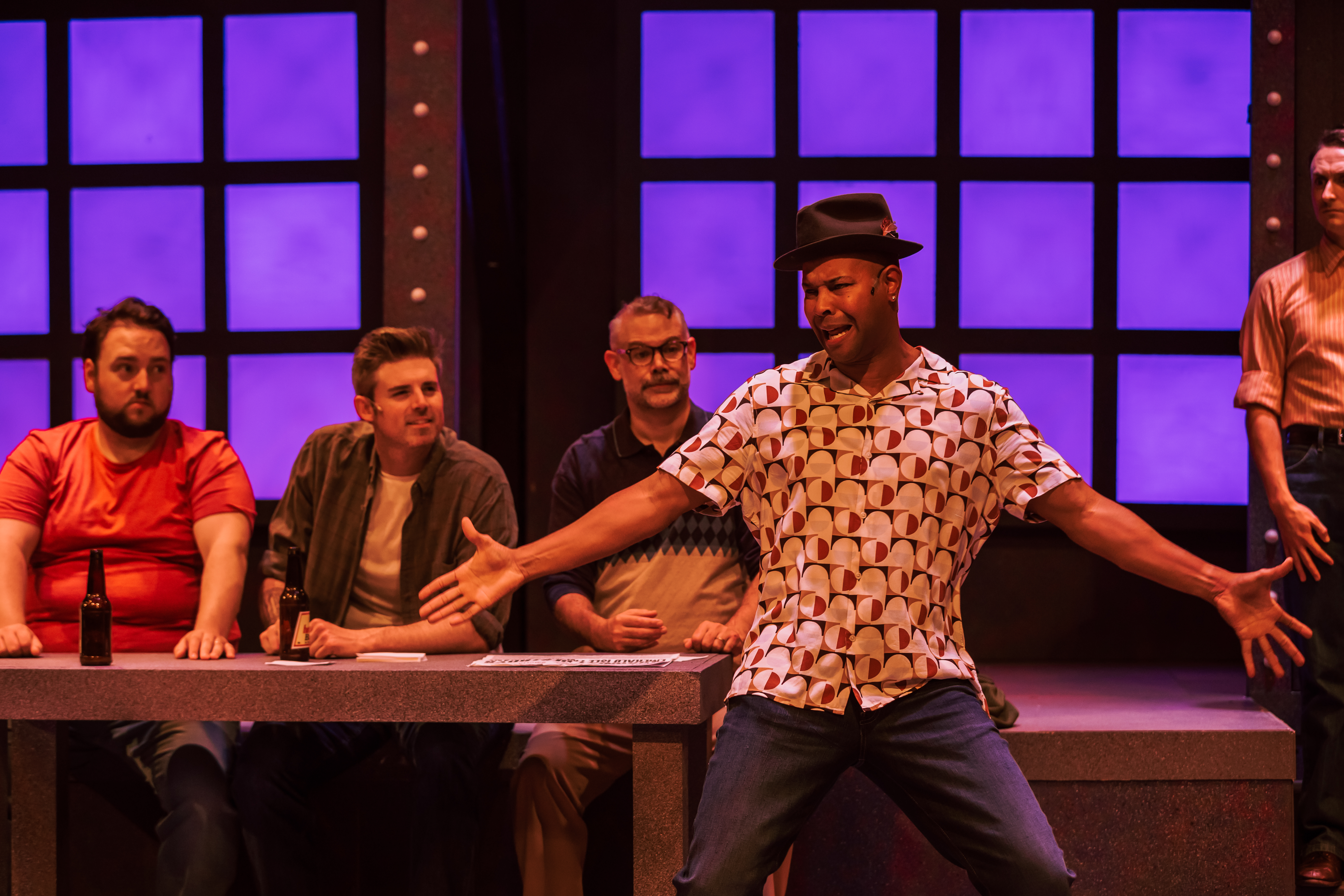 REVIEW: “The Full Monty” at the Mac-Haydn Theatre

THE FULL MONTY, which opened August 18th at the Mac-Haydn Theatre ends with a big,
show-stopping song and dance number called “Let It Go.” Warning: this is not the world of Elsa
and FROZEN! Instead, we are in down-on-its-luck Buffalo, New York, maybe in the 1980s,
where the local steel mill has shuttered its doors and heaved its blue-collar workers out on the
streets. The musical begins with a group of depressed and bitter fellows who sing
“Scrap”—feeling like the discarded metal they have spent their lives crafting.

To add insult to injury, their wives are keeping the families afloat by going to work, as the men at
home await jobs they deem suitable. The gals sing “It’s a Woman’s World” with gusto as they
share a sexy girls’ night out at a performance by Chippendales male strippers. These three
songs sum of the plot pretty well. As the unemployed men grow more desperate to get back to
the jobs that confirm their idea of manhood, friends Jerry and Dave come up with the idea to
stage their own strip show to make some cash and show the world “real men’s bodies.”

After this setup we get to know these husbands and their families and the toll the unemployment
is taking on them all. Jerry and Dave rope in four other guys, one of whom has taken a ballroom
dance class, and another one who has a security job at night, which allows them a place to
rehearse. Jeannette, a former showbiz gal, miraculously shows up with a piano to serve as their
accompanist and cheerleader and the stage is set. The men’s loneliness and insecurities are
bolstered by their bonding and friendships. Dave, who is portly to say the least, transcends his
fear of being seen naked. Malcolm and Ethan find their true affection for one another, and
Harold reveals the truth of his financial disaster to his wife, only to find out she still loves him.
Through it all the wives prove they love and stand by their men. Although Jerry’s marriage is
probably not restored, he gains the respect of his wife and the acceptance of his son for taking a
big risk.

It all leads up to “Let It Go” when the men not only have to sing, dance, and strip to their
skivvies, but to do the “full monty” and totally bare it all in front of an audience of their families,
other men, and a group of curious senior citizens who flock to their performance.

Under the direction of Todd Underwood, the large and talented cast of THE FULL MONTY takes
on the challenge and embraces the exhilaration and desperation of the characters with terrific
energy and joy. They really do let it go in scene after scene to the utter delight of the audience.
Standouts in the cast are Julia Hajjar as Georgie, Monica M. Wemitt as Jeanette, Erin Spears
Ledford as Vicki, and Holly Lauren Dayton as Pam. All strong singers and actors, these women
fully realize the dimensions of their characters, bringing warmth and affection to a script that is,
for the most part, two-dimensional and often crass.

The six male friends each have their moments too. Xander James as Jerry is a fine singer and
certainly looks the part of the steelworker. He is the best in the moments with his son, Nathan.
(At the performance reviewed Nathan was effectively played by Mason Hutchinson, who shares the role with Aidan Brennan.) Dean Marino plays Dave wholeheartedly and he and Gabe Belyeu as Harold particular shine in the touching song, “You Rule My World.” Kylan Ross (Malcolm) and Andrew Burton Kelley (Ethan) share a sweet rendition of “You Walk with Me.”

THE FULL MONTY is a big challenge for the Mac-Haydn space. The new theater seats are
some of the most comfortable in the region and scenic designer Kevin Gleason creates a set that
can transform quickly through the many, many set changes in spite of limited offstage space. But
the basic “look” was drab as the empty steel mill and short on glitz when needed. Angela
Carstensen’s costumes helped bring color to the stage and Andrew Gmoser’s lighting was very
workable. Director Underwood provided some clever staging. That staging was especially
effective in the large group numbers, using multiple entrances and playing in the aisles, not to
mention pulling off “the full monty” in a three-quarter round space! The ensemble of players was
terrific in keeping the excitement of those scenes going. Best of all was the big (and well-
balanced) sound of the orchestra under the direction of Emily Croome.

In other words, THE FULL MONTY has a lot to offer by way of entertainment. However, it
must be said that this musical (based on a film set in Britain and with book by the great Terrence
McNally and music and lyrics by David Yasbek), has not really stood the test of time. After
premiering at the Old Globe Theatre in San Diego, the musical opened on Broadway in 2000 and
ran for two years, garnering ten nominations for Tony Awards. What may have been acceptable
treatment of male/female relations at the end of the 20th century is no longer palatable over
twenty years later. I found it quite ironic that the show’s press release assiduously listed the
pronouns (“he/him,” “she/her”) for each of the cast members and yet chose to do a production
that, in the wake of Black Lives Matter, the #Me Too Movement, and gender issues that seems
completely out of sync with modern times. The play offers charm and humor to sugarcoat its
blatant racism, ageism, sexism, and homophobia. By the end of the production, the guys have
found friendship and an avenue to reveal themselves to their wives emotionally in a way they
could not have before, but the polarities of the views of the sexes established in the first scenes
keeps the audience from fully empathizing with some nice guys who fell upon tough times.
That being said, the large matinee audience was most supportive of the show – especially the
large group of senior citizens bussed in for that performance. And one has to give credit to the
brio and courage of the six fellows who “let it go.”

Vaccination and masks are required for all patrons. For tickets, please visit
www.machaydntheatre.org or call the box office at (518) 392-9292.