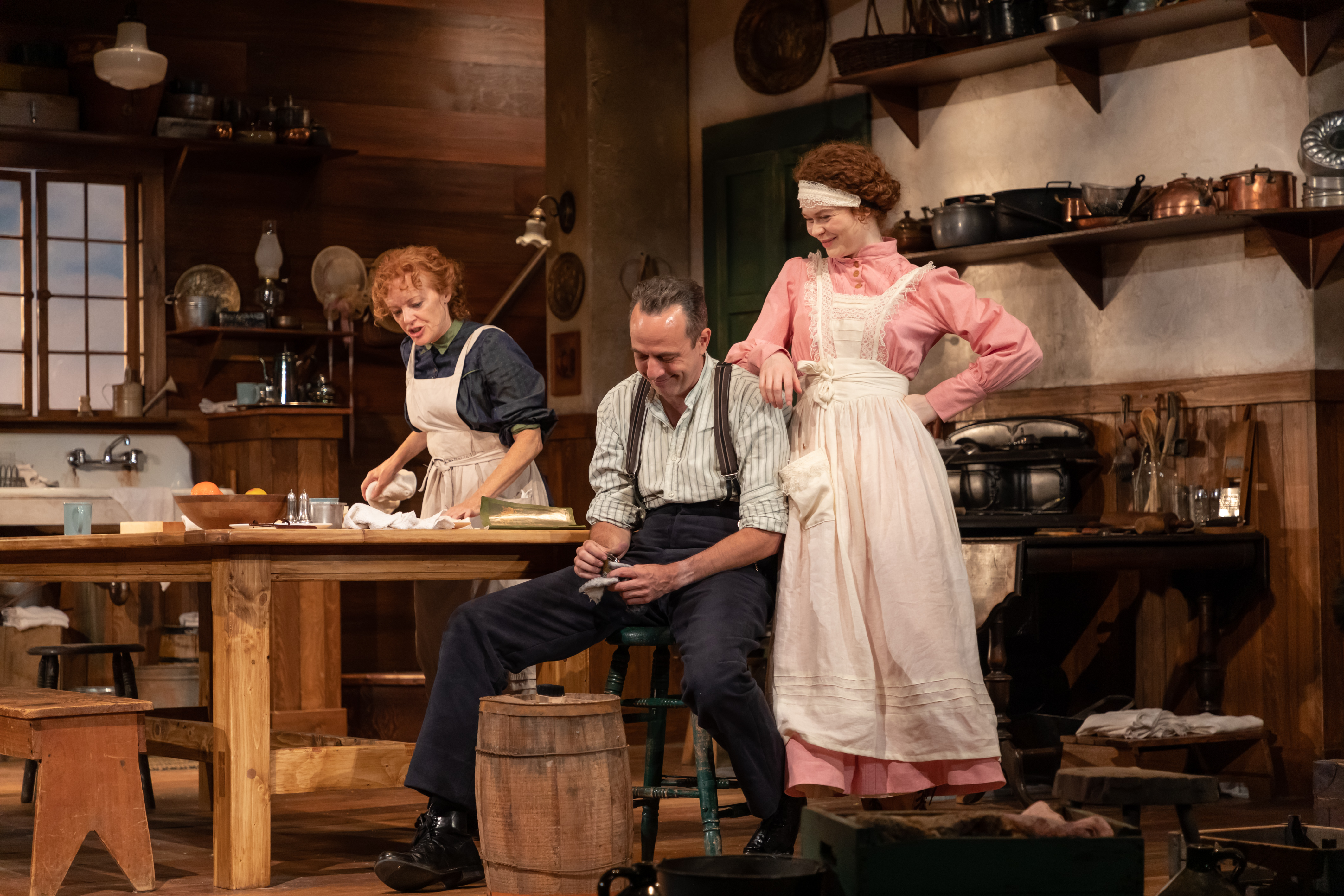 “Set during Eugene O’Neill’s classic Long Day’s Journey Into Night, failure, denial and passion roil as two Irish servants and an American chauffeur pass the day in the kitchen of the Tyrone family’s residence in 1912.” (Publicity blurb: Dorset Theatre Festival’s production of Thirst by Ronán Noone).

Long Day’s Journey Into Night is a play about the fictitious Tyrone family, famously stand-ins for Eugene O’Neill’s own family.  Noone’s conceit poses many questions:  What is the relationship between O’Neill’s play and Noone’s?  Are we expecting to see the Irish equivalent of Tom Stoppard’s Rosencrantz and Guildenstern are Dead, during which we would meet O’Neill’s characters?

Noone has something else in mind.  We never see the Tyrones, though we do sometimes hear sounds coming from beyond the kitchen.  Instead, Noone has given us a sort of Upstairs, Downstairs setup without the Upstairs.  What he does is to explore the connections between nineteenth-century Irish immigrants who have become successful in America (e.g. James O’Neill, Eugene O’Neill’s father—a Shakespearean actor famous for his oft-repeated portrayal of the Count of Monte Cristo) and more recent, lower-class immigrants who arrived in the early part of the twentieth century, struggling to make a life, to find a home, to live their dreams.

Noone has experienced this transition himself:  he grew up in Galway, Ireland and emigrated to the U.S. at the age of twenty-four.  In an interview for the Times Argus, he describes his journey:  “If you are an immigrant, and come to this country, you are leaving everything behind that you knew to begin again, afresh. . . It offered me opportunity, it spring-boarded me into an occupation, which I didn’t know I could achieve.”  (The immigrant experience has drastically changed in recent years!)  Now a playwright and teacher, Noone’s play The Second Girl, originally produced by Huntington Theatre Company in Boston and then at the Williamstown Theatre Festival in 2015, was the inaugural winner of the Association for Theatre in Higher Education Excellence in Playwriting Award as well as an Edgerton Award winner in 2014.  A forerunner of Thirst, Noone decided, after seeing The Second Girl onstage, that it was too Irish—“too maudlin,” too much like O’Neill.  So with the help of Dorset’s Resident Playwright, Theresa Rebeck, the play was redrafted and reworked into a new, Irish-American, more comedic play, resulting in the World Premiere of Thirst, directed by Rebeck.  (Ironically, in 1914 O’Neill wrote a one-act play with the same title, about three people on a raft, dying of thirst.)

Though the characters from Long Day’s Journey Into Night don’t physically appear in Noone’s play, they are sometimes heard and often discussed by the three characters in Thirst:  Bridget, the cook (Kathy McCafferty), her young niece Cathleen, the Second Girl (Meg Hennessy, hailing from Limerick, Ireland)), and Jack, the chauffeur (David Mason).  Bridget, who emigrated to America sixteen years ago from Ireland, has secured a job for Cathleen to work with her for the Tyrone family, and sent money for her passage (unfortunately on the Titanic!).  Cathleen, lucky to have survived, had left her fiancé to come to America to earn money for their future life together.  After four months in America, she dreams of becoming an actress (coached in Shakespearean soliloquies by James Tyrone) in New York City.  Jack is an American in love with Bridget, who has saved him from living on the street and arranged for him to be the family’s chauffeur.  Jack desperately tries to persuade Bridget to leave her job and join him in a new rental car business in Ohio.  How similar these servants are to their employers, who, in response to life’s difficulties, tragedies and disappointments have turned to alcohol  to relieve their suffering.  Jack asks:  “What kind of race of people are you that love to struggle so much?” The Tyrones are on their way out while the characters in Thirst are survivors.  In the end, who has the right to look down on whom?

The cast is uniformly excellent.  Thirst is Bridget’s story and McCafferty couldn’t be better.  According to Jack, there are actually two Bridgets: “the one who can only love when she’s drunk. . . And there’s the one like a mean, mean, nun.” McCafferty’s multi-layered performance allows us to see her love for Jack, her hard exterior and her vulnerable, sensitive interior.  But she cannot permit emotion to color her mission:  “to step up in station, defy their perceptions of being shanty Irish and lead a good moral, righteous existence.” Cathleen (Hennessy) can’t help but bicker with Bridget.  She’s flirty, ambitious and wild and will not settle for Bridget’s philosophy of life:  “And to think I immigrated for a better life and this is the shit I got. . . Cathleen Mullin is alive. Alive.  And I am strong.”  Despite her penchant to upset  her aunt, the two share a deep love that shines through her high-spirited performance.   David Mason’s Jack is not only a puppy dog who follows Bridget everywhere, but also a self-proclaimed warrior determined to make something of himself—a handsome, persuasive lover whose sexual attraction is nearly impossible for Bridget to deny.  From the beginning we are rooting for Jack to break through Bridget’s armor:  a daunting task.

Rebeck, an exceptional playwright and director, has not only assembled a first-rate cast but her designers are top of the line.  Set designers Christopher and Justin Swader have created one of the most detailed working onstage kitchens since Williamstown Theatre Festival’s SEARED several years ago.  With a working stove and sink, meals are cooked, hands and dishes are washed, and a swinging door gives access to the Tyrone family dining room, through which Bridget and Cathleen  carry meals back and forth–all choreographed to perfection. Thanks to Mary Ellen Stebbins’ lighting and Fitz Patton’s terrific selections of Irish music that permeate the play, the passage of time (twenty-four hours and the following morning) is clearly and beautifully delineated.  Fabian Fidel Aguilar’s period costumes help us separate the servants’ livery from their true selves when they go out on the town.

Thirst is well worth a trip to Dorset. This is high quality theatre, just what we have come to expect from this fine company.

THIRST runs from August 18—September 3 at the Dorset Theatre Festival.  Tickets may be purchased by calling 802-867-222 or online at dtf@dorsettheatrefestival.org.