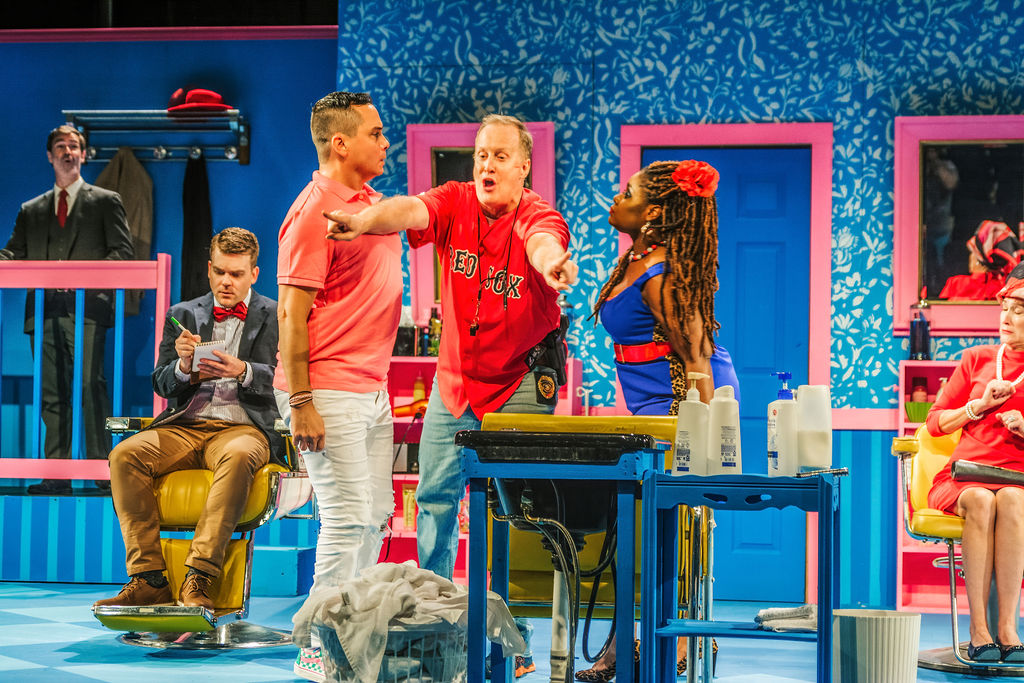 On a recent Thursday evening hundreds of people in Sharon, Connecticut suffered from a similar malady.  Their sides were aching from the non-stop laughter at Sharon Playhouse’s hoot of a show Shear Madness.  There is very little time to catch one’s breath with a host of sterling performances led by Michael Kevin Baldwin.  Even before the play actually starts its plot development the audience is already screaming.

Directed by one of the creators of the show who has directed it all over the country, Bruce Jordan starts the proceedings with a simple expository scene which establishes the setting in a hair styling salon with two relatively incompetent hairdressers – Tony (Baldwin) and Barbara (Soneka Anderson.)  Their customers include Nick (Patrick Noonan,) Eddie (Gil Brady,) Mikey (Will Nash Broyles) and Mrs. Shubert (Sandy York.)  All of them have more than one hilarious moment in the spotlight.  From there a comic murder-mystery unfolds with audience participation in solving the crime.

The salon is on the first floor of a building owned by a famous retired concert pianist who lives above the shop.  She continually plays the piano much to Tony’s chagrin.  Even banging on the pipe leading up to her apartment is to no avail.  At one point or another everyone excerpt for Mrs. Shubert, ventures upstairs to see her.  Barbara discovers her dead body.

Nick and Mikey are undercover cops and everyone is a suspect; the investigation starts by reconstructing their movements.  Nick turns to the audience and asks for their help to identify the killer.  An ingenious part of the script is that the audience votes on who is the killer.  The decision can change from night to night so that each of the suspects has to have a “confession” speech ready.

The dialogue is a composite of malapropisms, garbled sentence structure, ad libs throughout the evening, wonderful and terrible puns, and myriad local references as well as comments about Biden, Trump, both the Clintons and today’s political and social events.

As much fun as the plot et al may be, it is the performances that carry the show.  Broyles’ Mikey is a charming simpleton. His reading of the Miranda Law to the suspects has comic nuances thanks to his delivery and his reactions to some of Nick’s orders and the suspects’ behavior are sweetly inane.  Mrs. Shubert is a very wealthy and semi-sophisticated matron.  Ms. York makes her almost likable in her snooty fashion, little lies and weaknesses.  Gil Brady gives Eddie a sleazy but charming personality.  As a dealer of, as Mikey says, “…old antiques,” he is also something of a player.

Barbara as played by Ms. Anderson is a wise-mouthed powerhouse.  She has a huge personality that is complemented by a concern for the pianist, Mrs. Shubert and, of course, Tony.  Occasionally her voice becomes shrill making it a bit difficult to understand some of her lines, BUT you know when she’s onstage!!  Nick is the cop who indulges in more of the language faux-pas than any of the other characters.  He, as the lead investigator, deals directly with the audience asking them for their observations of who did what when; he also solicits questions.  Every now and then he bumbles his way through a personable blunder.

But it’s Baldwin!  He doesn’t steal the show because he shares moments with everyone.  As Tony, he prances and gestures in the manner of the over-the-top campy hair dresser and gossip.  His facial expressions are priceless even when he’s not directly involved in a scene. His delivery, especially the one-liners, is hysterical and always in character.  Though Tony has a big personality, Baldwin doesn’t undermine his fellow actors’ scenes.  It is a performance to be cherished.

All of this takes place in an absolutely terrific set by Karla Woodworth.  Everything reflects a tacky beauty parlor with its bright turquoise and patterned walls highlighted by bright pink door frames.  All the accoutrements work from the sink to the various required seats of the trade and the various creams and lotions which Tony delivers in excess.  Alix Lewis’s light design gives the set a brightness matching the wit and joyousness of the production.  The costumes gathered by Karen Roberts identify the personalities of the various characters, even the police in their plain clothes provide comic references.

The show was created by Jordan and his wife/partner Marilyn Abrams in 1978 based on a play by Paul Portner.  They converted it into one of the first interactive productions.  It has since played all over the world and is the longest running play in American theatre history.  Abrams and Jordan have garnered innumerable awards and accolades.

To understand the success of Shear Madness and to have an extraordinarily wonderful time get to the Sharon Playhouse!!