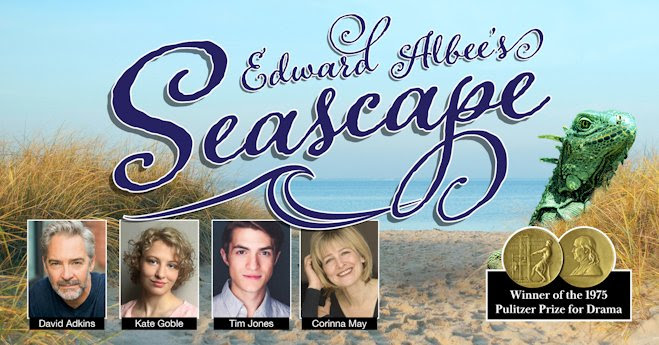 Winner of the 1975 Pulitzer Prize for Drama

Told with ironic wit and warmth, a middle-aged couple meets a pair of highly evolved lizards and both couples examine the meaning and significance of life.

Pittsfield, MA – Running September 29 through October 23 at the Berkshire Theatre Group‘s Unicorn Theatre, winner of the 1975 Pulitzer Prize, Edward Albee’s Seascape brings true eloquence to its compelling yet subtle examination of the very meaning and significance of life itself. Told with Edward Albee’s signature ironic wit and razor sharp perception and directed by Eric Hill, Seascape finds Nancy and Charlie, a middle-aged couple, on a deserted stretch of beach, relaxing after a picnic lunch, talking idly about home, family and their life together. She sketches, he naps, and then, suddenly, they are joined by two lizards who have decided to leave the ocean depths and come ashore.

Initial fear, and then suspicion of each other, are soon replaced by curiosity and, before long, the humans and the lizards are engaged in a fascinating dialogue. The lizards are contemplating the terrifying, yet exciting, possibility of embarking on life out of the water; and the couple are contemplating long-term love, the changing expectations that come with Charlie’s imminent retirement and whether they can continue into this final life-stage together. The answers are given with warmth, humor and poetic eloquence. The emotional and intellectual reverberations will linger in the heart and mind long after the play has ended.

“Of all Mr. Albee’s plays, Seascape is the most exquisitely written.” –The New Yorker

Tickets are on sale now. All plays, schedules, casting and prices are subject to change. To purchase tickets, visit www.BerkshireTheatreGroup.org or contact the Colonial Ticket Office by calling 413-997-4444.

The ticket office located at 111 South St, Pittsfield MA, is open Tuesday through Sunday 12pm-5pm or on any performance day from 12pm until curtain.

Seascape was written by Edward Albee and is directed by Eric Hill (BTG: Shirley Valentine; Holiday Memories; The Goat, or Who is Sylvia?; Naked; At Home at the Zoo (The Zoo Story); The Homecoming; Thoreau or, Return to Walden; Poe; Benefactors; A Christmas Carol; Oklahoma!; A Chorus Line; The Who’s Tommy) and will feature David Adkins (BTG: Dracula; The Importance of Being Earnest; The Goat or, Who is Sylvia?; The Petrified Forest. TV: New Amsterdam; Madam Secretary; Evil) as Charlie; Kate Goble (BTG: Footloose, A Christmas Carol) as Sarah; Tim Jones (BTG: Dracula; Godspell; Holiday Memories; Working: A Musical; You’re a Good Man, Charlie Brown) as Leslie; and Corinna May (BTG: Shirley Valentine; The Importance of Being Earnest; Holiday Memories; Benefactors; Same Time, Next Year; Homestead Crossing; Two-Headed) as Nancy.

David Adkins (Charlie) has performed in numerous productions at Berkshire Theatre Group over the last thirty years. He also appeared this summer in BTG’s production of Dracula. He is an Artistic Associate at BTG and appeared last summer in The Importance of Being Earnest. He has worked On and Off-Broadway, in resident theatres across the country and guest starred extensively on television, most recently for NBC on New Amsterdam. Others include: Madam Secretary, Evil, Homeland, Blacklist, The Good Wife, Elementary, The Americans (two seasons), Happy-ish, Without a Trace, Law and Order, SVU, Black Jaq: a pilot directed by Forrest Whitaker and the Ben Franklin mini-series on PBS.

Kate Goble (Sarah) is incredibly excited to make an appearance as Sarah in Edward Albee’s Seascape! Kate has worked with BTG for nearly eight years now, and is incredibly grateful for every opportunity they have been given by the company to grow as both an artist and a human being. Some of Kate’s favorite past roles include: Ariel Moore in Footloose, Belle in A Christmas Carol, and Alice Beineke in Monument Mountain High’s production of The Addams Family. Kate is taking a gap year after graduating and is hoping to attend a conservatory style program to study musical theatre next fall. All pronouns.

Tim Jones (Leslie) is always humbled to be at BTG, among those he considers his artistic family. A Berkshire native, Tim has his Master’s in Aerospace Engineering, and is fortunate enough to be living his dream of working in the theatre. He was seen in BTG’s historic pandemic-era productions of Godspell (Judas) and Holiday Memories (Buddy). Other BTG credits include: Dracula (Understudy); Working: A Musical (Frank) and You’re a Good Man, Charlie Brown (Schroeder). Other recent credits include: The Hanover Theatre’s A Christmas Carol (Young Ebenezer). Tim is in awe of the artists who showed up to work throughout the pandemic, and the audiences who followed safety procedures to allow that work to continue. You are as much a part of theatre’s return as we are.

Eric Hill (Director) directed Berkshire Theatre Group’s productions of Shirley Valentine; Holiday Memories; The Goat, or Who is Sylvia?; Naked; At Home at the Zoo (The Zoo Story); The Homecoming; Thoreau or, Return to Walden; Poe; Benefactors; A Christmas Carol; Oklahoma!; A Chorus Line; The Who’s Tommy as well as Snow White and the Seven Dwarfs at the Neil Ellenoff Stage at the Mount. Additional BTG directing credits include: Macbeth, Endgame, Faith Healer, The Einstein Project, Amadeus, The Glass Menagerie, One Flew Over the Cuckoo’s Nest and The Caretaker. Previous acting credits include: Deathtrap, A Man for All Seasons, Dimetos, The Father and Scrooge in A Christmas Carol (2006–2019).

Isadora Wolfe (Movement Director) is from Lowell, Massachusetts. She has worked with choreographers and directors such as Johannes Wieland (NYC and Staatstheater Kassel, Germany), Martha Clarke (Garden of Earthly Delights and Angel Reapers original cast), Mark Dendy, Maxine Doyle and Richard Jones (The Hairy Ape at the Park Avenue Armory). Isadora is now Artistic Associate for Punchdrunk (UK), after her post as Resident Director for its NYC production of Sleep No More. She’s had the pleasure of appearing in several BTG plays (Holiday Memories, Peter Pan, Siddartha, Zorba), and has created movement for productions including Eric Hill’s The Einstein Project, Holiday Memories and Macbeth; David Auburn’s The Skin of Our Teeth and The Importance of Being Earnest; and Gray Simons’ Wizard of Oz. Isadora teaches and coaches dancers and actors at various institutions and festivals, and is currently adjunct faculty at The Juilliard School. This summer at BTG, Isadora also created movement for Once and Dracula. She divides her time between the Berkshires and NYC, and is so grateful to BTG for this opportunity. She/her.

Elivia Bovenzi Blitz (Costume Designer) is a costume designer based in New York City. She has spent the past five seasons in the Berkshires designing costumes for Berkshire Theatre Group and Barrington Stage Company. This summer at BTG, Elivia also designed costumes for Once. For BTG: White Christmas, Wizard of Oz, and Shirley Valentine. For BSC: A Glass Menagerie, Typhoid Mary, The Birds, American Underground, If I Forget, Kunstler, Peerless, and Time Flies and Other Comedies, for which she was nominated for a 2019 Berkshire Theatre Critics Award for Outstanding Costume Design. Elivia has worked as an assistant designer on Broadway shows including: My Fair Lady, Fiddler on The Roof, War Paint, Incognito and The Father. She has designed an extensive repertoire of Shakespeare including productions with Shakespeare On the Sound, Shakespeare Theatre of New Jersey, Elm Shakespeare, New York Shakespeare Exchange and Yale. Over the course of her career, she has worked at The Public Theater, Alliance Theatre, Two River Theater, Hartford Stage, LaMaMa, Ars Nova, NYU and Troy Foundry Theater. She holds an MFA in Design from the Yale School of Drama. Elivia currently is an Adjunct Professor of Fashion History at FIT. Proud member of United Scenic Artists Local 829.

Matthew E. Adelson (Lighting Designer) Also this season for BTG: Once. Previously: White Christmas, Shirley Valentine, Nina Simone: Four Women, The Wizard of Oz, Holiday Memories, Godspell, A Christmas Carol (2006 to 2019), Shrek The Musical, The Goat or Who is Sylvia?, Naked, Tarzan, The Music Man, Fiorelllo! (Stockbridge and New York), Thoreau, Poe, Tommy, Babes in Arms, Red Remembers, The Einstein Project, Broadway By The Year, A Man for All Seasons, Caretaker, One Flew Over the Cuckoo’s Nest, The Glass Menagerie, Amadeus, Rat in the Skull, The Misanthrope, Floyd Collins, Talley’s Folly, A Saint She Ain’t (Stockbridge and Westport), Miss Julie, Dream Play, Love’s Fire, Secret Lives of the Sexists and Life’s A Dream. He has also designed extensively throughout the Berkshires, for Barrington Stage, Shakespeare & Company, Berkshire Playwrights Lab,Berkshire Opera, Jacob’s Pillow and Williams College, among others. Matthew is the Production Manager for Five College Dance, in the Pioneer Valley (Amherst, Hampshire, Mount Holyoke, Smith and UMass Amherst) and was the Director of Production for the Mahaiwe Performing Arts Center from 2005 to 2014. MFA: Yale Drama School.

Caroline Stamm (Stage Manager) Originally from central North Carolina, Caroline relocated to the beautiful Berkshires to continue pursuing her career in Stage Management with Berkshire Theatre Group. This summer at BTG, Caroline also stage-managed B.R.O.K.E.N code B.I.R.D switching and Songs For a New World. Recent BTG credits include: Footloose (SM), Magic Tree House: Dinosaurs Before Dark (SM), White Christmas (PA), The Wizard of Oz (SM), Holiday Memories (PA), Godspell (PA), A Christmas Carol (2019 SM, 2018 SM, 2017 ASM), Other favorite regional credits include: The Barber of Seville (ASM) at The Greensboro Opera and Beautiful Star (ASM) at Triad Stage. Caroline is a graduate from the University of North Carolina at Greensboro (‘17), where she obtained her BFA in Technical Production (with an emphasis in Stage Management) and minored in American Sign Language.

The Colonial Theatre, founded in 1903, and Berkshire Theatre Festival, founded in 1928, are two of the oldest cultural organizations in the Berkshires. In 2010, under the leadership of Artistic Director and CEO Kate Maguire, the two organizations merged to form Berkshire Theatre Group (BTG). Berkshire Theatre Group’s mission is to support wide ranging artistic exploration and acclaimed performances in theatre, dance, music and entertainment. Every year, BTG produces and presents performances to over 68,000 attendees and, through our Educational Program, serves over 11,000 Berkshire County school children annually. In July

2020, Berkshire Theatre was the first company in the United States to earn approval from