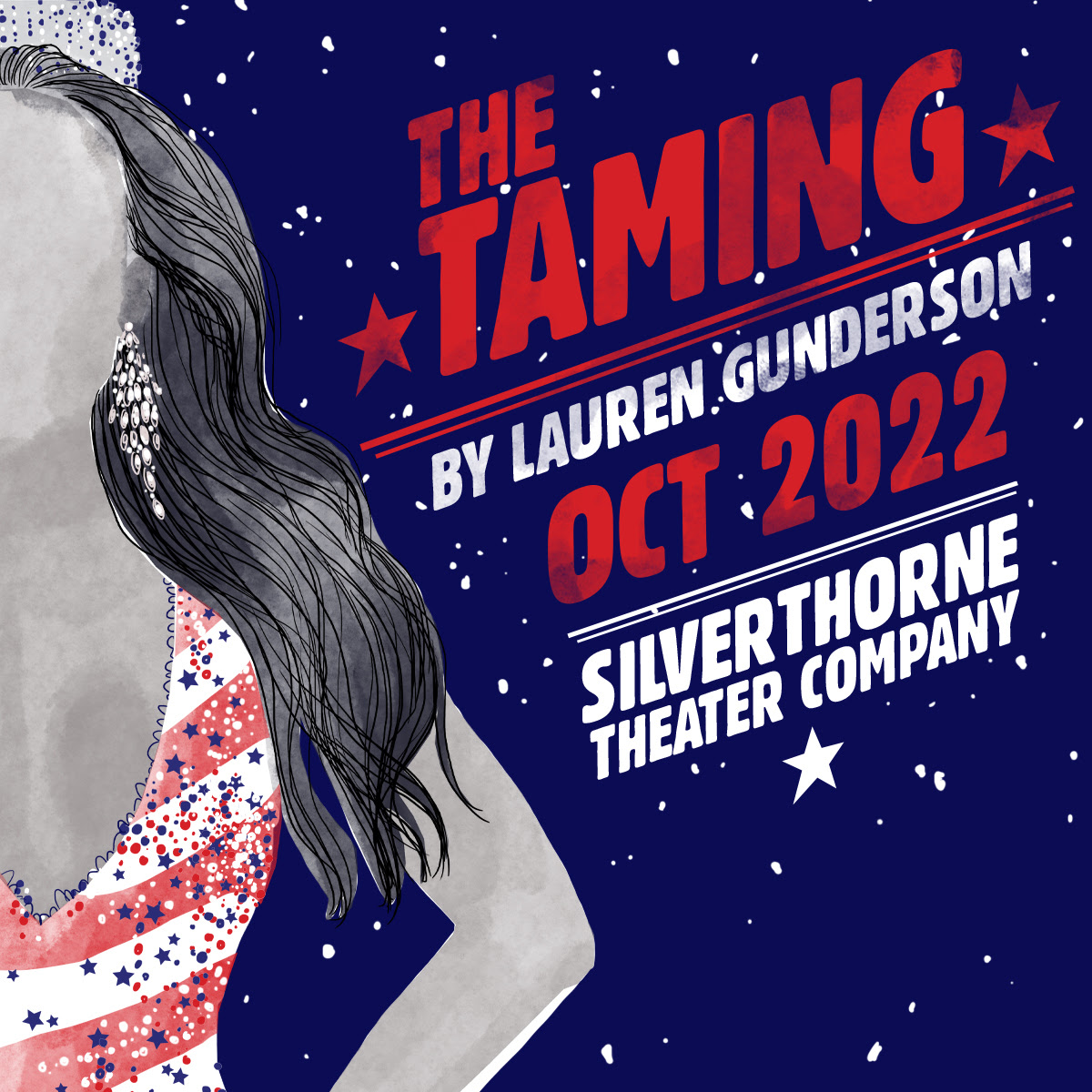 Greenfield, MA and beyond – With a burst of patriotic song and covered in American flags, Miss Katherine Chelsea Hartford from the gorgeous state of Georgia vows to become the next Miss America and make her momma proud. Silverthorne Theater’s production of Lauren Gunderson’s The Taming promises audiences a hilarious romp through the contemporary, past and future corridors of power.

Under the direction of Mary Corinne Miller, The Taming opens on Friday October 21, in The Perch at Hawks & Reed Performing Arts Center, 289 Main Street, Greenfield MA. Evening performances at 7:30 pm are scheduled for October 21, 22, 27, 28 & 29, with 3:00 pm matinees on October 22, 23, and 29. Tickets are on sale at EventBrite.com. The venue is handicapped accessible. In keeping with now standard live theater practice, audience members are asked to wear masks to prevent the spread of the Covid 19 virus.

Inspired by Shakespeare’s Shrew, beauty pageant contestant Katherine (Tahmie Der) has aspirations beyond the sash and crown – but she needs the help of an ultra-conservative Senator’s aide Pat (Stephanie Carlson*) and ultra-liberal eco-terrorist Bianca (Tracy Einstein).   It takes a trip back to 1770 for Kate to find an unexpected compromise that is timely and fresh.

Director Mary Corinne Miller brings a wealth of experience to her Silverthorne debut. Mary Corinne Miller is a director, theater-maker, educator, and arts administrator based in the pioneer valley. She has worked with numerous professional theater companies in New York City and throughout Western Massachusetts including The Player’s Theater, The Children’s Theater Company, TADA! Theater, Shakespeare and Company, New Century Theater, and Barrington Stage Company. Her directorial work centers on the exploration of the audience-actor relationship through innovative theatrical forms such as immersive theater, site-specific performance, community-engaged theater, and Theatre of the Oppressed. Corinne earned her MFA in Theater Directing at UMass Amherst, where she developed and directed immersive adaptations of August Strindberg’s A Dream Play and Shakespeare’s A Midsummer Night’s Dream. Other directing credits include: The Misanthrope (UMass Amherst), New Play Lab (UMass Amherst), The Giver (Players Theater), Sonia Flew (NYU), Peter Pan (Saratoga Stages), and This Is our Youth (Skidmore College). Corinne founded Saratoga Stages theater company in Saratoga Springs, NY and served as the Artistic and Executive Director for the company for many years. She lives in South Hadley and is a proud member of the Stage Directors and Choreographers Society (SDC).

Tahmie Der portrays the flamboyant Katherine. A mature student at Greenfield Community College, she has been involved in productions there and recently appeared in The Elephant Man. This is her first time working with Silverthorne. She’s been acting since high school and now studies with Tom Geha. Her favorite roles include Olivia in Twelfth Night, Ilse in Spring Awakening, and Leah in Silence! The Court is in Session (American Translation). She lives in West Brookfield.

Stephanie Carlson* plays Patricia (Pat), aide to inept Senator Peter Baxter (R-GA) and devoted to assist him with his presidential aspirations. Carlson, a member of Actors’ Equity Association*, has previously appeared in Silverthorne shows including The Diary of Anne Frank, The Fantasticks, Tales of the Lost Formicans, Delectable Durang, Jacques Brel is Alive and Well and Living in Paris, and Turn of the Screw. This summer she played Rita in Passport Theatre’s Educating Rita in Easthampton. Stephanie has appeared in many other local productions with New Century Theatre, Panopera, the Majestic Theater, Hanover Theatre, Speakeasy Stage, Boston Theatre Works, and more. She periodically pops over to Helsinki, Finland to act in productions there, most recently Small Mouth Sounds and Educating Rita in 2021. An Easthampton resident, Stephanie is a proud Hampshire College alumni, and in her spare time enjoys swimming, gardening, painting and travel. This November, she will return to Hawks & Reed with Rosemary Caine’s Wilde Irish Women for a concert of her new original musical composition, The Celtification of Emily Dickinson. www.StephCarlson.com

Complete details about this and other Silverthorne productions may be found at our website: https://silverthornetheter.org

Silverthorne Theater Company is a registered non-profit 501(c)(3) arts organization founded in 2014. Our mission is to engage Valley artists and audiences in the conversations of our time with bold, intimate, professional theater. We perform in Western Massachusetts on the ancestral lands of the Nipmuc, Pocumtuck, and Wabenaki peoples.