The Two Of Us Productions Presents “12 Angry Jurors” 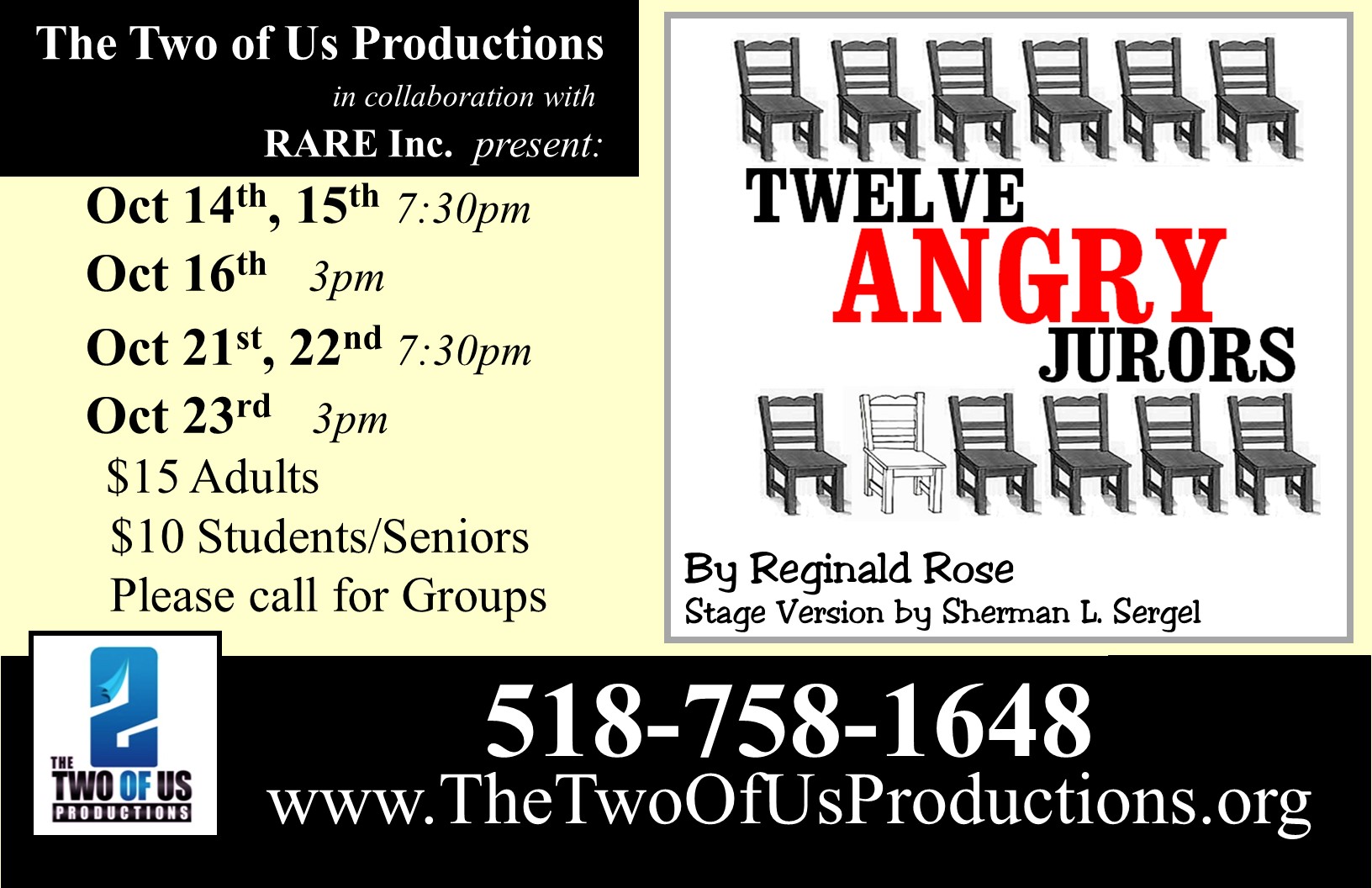 The Two Of Us Productions Presents “12 Angry Jurors”

The Two Of Us Productions, the award winning theater company based in Copake NY, is pleased to continue their return to live in-person theater with 12 Angry Jurors, the tense courtroom drama by Reginald Rose adapted for the stage by Sherman L. Segel.  Performances are October 14th, 15th 16th & the following weekend of October 21st, 22nd & 23rd.  12 Angry Jurors is being presented at the Performing Arts Center at Taconic Hills CSD, reconfigured to put you right next to the jury.  You don’t want to miss this exploration of human strengths & weaknesses, testing the reliability of sworn evidence presented in court & exposing each jurors’ prejudices when faced with a life & death decision.

12 Angry Jurors puts you, the audience, in the midst of the jury deliberations of a homicide trial.  A dozen local citizens are entrusted with deciding the fate of a teenage boy accused of murdering his abusive father. As the play opens, our 12 jurors are nearly unanimous in concluding the youth is guilty. One juror dissents, declaring the young man “not guilty” and proceeding to sow a seed of reasonable doubt. As the emotionally charged jury deliberations proceed you are a right there as our jury struggles to understand the sworn testimony of several witnesses, to decide for themselves what is credible and what is “reasonable doubt”.  The jury’s decision is a surprise that you don’t want to miss.

Performances of 12 Angry Jurors are 2 weekends only – October 14th, 15th 16th, and the following weekend of October 21st, 22nd & 23rd, 2022.  Friday and Saturday performances are at 7:30pm and Sunday matinees are at 3pm.  The Performing Arts Center at Taconic Hills CSD is located at 73 County Route 11A, Craryville NY. & is visible from nearby Route 23.  Tickets are $15 for adults, $10 for Students & Seniors.  Please call for Group Rates.  For advance reservations visit www.TheTwoOfUsProductions.org or call 518-758-1648.  Seating is limited, so make your reservations early for the best seats on the date you want!

The Two Of Us Productions is well known throughout the Hudson Valley for presenting quality theater, both musicals and dramas.  Their recent productions of A Shyana Maidel, Cabaret, Sweeney Todd, Chicago, Les Miserables, next to normal, Deathtrap, Lend Me A Tenor and Jesus Christ Superstar were all recognized by the Theatre Association of NYS with multiple awards, including outstanding work by the company, outstanding performance by the orchestra, excellence in direction, and many individual actor awards.

These performances are supported with funds from Hudson River Bank & Trust Foundation, Stewart’s Shops, Bank of Greene County, Rheinstrom Hill Community Foundation, Greylock Federal Credit Union, and Key Bank.  This project is also made possible with funds from the Statewide Community Regrants Program, a program of the New York State Council on the Arts with the support of the Governor’s Office and the New York State Legislature and administered in Columbia County by the Greene County Council on the Arts dba CREATE Council for the Art