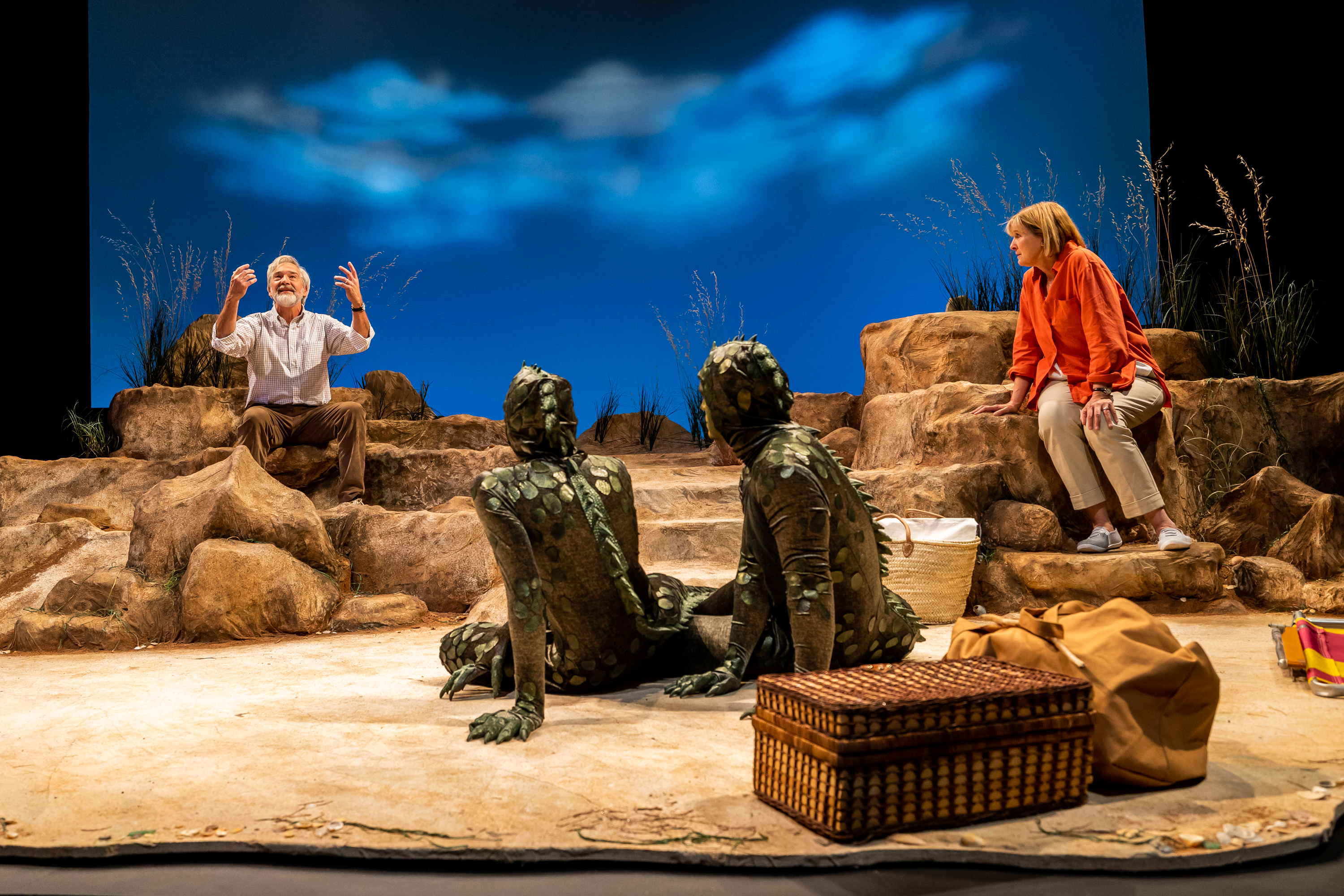 The stage at Berkshire Theatre Group’s Unicorn has been transformed into a beach where a middle-aged, English-speaking, long-married couple are suddenly confronted by a younger, non-human, English-speaking couple:  two large lizards, who have come up out of the sea.  Given that this play, Seascape, was written by Edward Albee, anything can happen.  In director Eric Hill’s capable hands, this production is one of the most enjoyable highlights of the 2022 Berkshire season.

Hill has directed two other Albee plays at BTG:  The Goat, or Who is Sylvia? and At Home at the Zoo (The Zoo Story).  In a recent interview with The Berkshire Eagle, Hill said about Albee:  “I understand his plays.  He is. . . America’s greatest playwright.  Each time I direct one of his plays I find another amazing aspect to his writing I didn’t know.”

Seascape was Albee’s second Pulitzer Prize winner for Best Play (1975), the first being A Delicate Balance in 1966. His third was Three Tall Women in 1993, an autobiographical play about his domineering mother, a wealthy socialite.  Albee, who died in 2016, left the Westchester home of his adoptive parents at the age of eighteen and used his unhappy life there as fodder for many of his works, including the well-known and controversial Who’s Afraid of Virginia Woolf ?, which won a Tony Award for Best Play (1963) and three years later became an Academy Award-winning film.

Seascape was directed on Broadway in 1975 by Albee himself, featuring Barry Nelson and Deborah Kerr as the humans (Charlie and Nancy) and Frank Langella (in his Broadway debut) and Maureen Anderman as the lizards (Leslie and Sarah).  Though Hill believes that Charlie and Nancy are based on George and Martha, there is a world of difference between them.  While the unsympathetic characters in Virginia Woolf tear each other apart emotionally, Charlie and Nancy, despite their differences, seem to have a sound marriage.  In the first act of Seascape, their major problem is what to do now that they are retired:  they have three children who are on their own and these empty nesters need to figure out the rest of their lives.  We are not given any specific details about them but we do know that Charlie wants to do nothing—to relax and enjoy whatever time is left to him–while Nancy is eager to explore the world, traveling from beach to beach, painting the glorious scenery, meeting exciting people.  She tells Charlie:  “If you don’t want to do what I want to do—which doesn’t matter—then we will do what you want to do, but we will not do nothing.”  She sees him as “all caved in,” returning to infancy:  “the same at the end as at the beginning,” entering “purgatory before purgatory.”  What begins as a discussion of retirement morphs into profound questions about existence, about why we are here.  David Adkins, who plays Charlie, asks in the Eagle interview:  “What do we do now? Evolve? Stay alive, literally and figuratively?”

Indeed, Albee is concerned in this play with evolution.  Lizards decide to leave their underwater home, where they no longer feel comfortable, in order to experience life on land.  But when they learn from the so-called “evolved” species (humans) about the pain of life—emotions, which they have not felt before, the necessity of facing their own mortality–they are ready to return to the sea.  But will they? Doesn’t evolution require them to remain, to go on?  Hill believes that this play is Albee’s response to Beckett’s Waiting for Godot, which was performed at Barrington Stage this summer.  Clive Barnes, recognizing Albee’s connection to Beckett and the Theatre of the Absurd, notes in one of the few positive reviews of Broadway’s Seascape: “the purpose of life is life itself—it is a self-fulfilling destiny.  We have to come out of the water and get onto the beach, we have to live and we have to die, simply because life is about life.” And like Godot, this play is infused with humor.  The antics of Beckett’s clowns and the interplay between and among Albee’s two couples, are as funny as they are existential.

Corinna May, who plays Nancy, speaks in the Eagle interview about the poetry of Albee’s language, observing that her character speaks in thoughts, which makes it challenging to memorize the lines.  But May shows a real understanding and identification with the meaning of each line, especially in her long and difficult monologues in the first act, written in the form of stream of consciousness, as she considers the changes in her marriage over the years.  She, like her lizard counterpart, Sarah (Kate Goble), stands with her man when he’s upset or threatened, and offers advice when he needs it, though Nancy seems less submissive than Sarah.  Adkins’ Charlie, like his lizard counterpart Leslie (Tim Jones), is suspicious, aggressive, macho, and protective of his mate.  Beautifully played by Adkins, Charlie expresses his condescension towards the “brute beasts” as well as his own vulnerability:  he is easily stung when Nancy mocks their life together, he bursts into jealous tears, he is furious when she tries to persuade him to return to a favorite childhood place:  sitting underwater enjoying the peace and quiet, watching the fish.  He is envious of the lizards:  perhaps he would prefer to  trade places with them.  Jones is equally fine, as he explodes with anger and frustration because he doesn’t understand the human concepts expressed by a cruel, goading Adkins, who cannot explain them and refuses to try, frustrated by the incomprehensibility of life.

Isadora Wolfe, the Movement Director, does a first-rate job in helping the actors with the physicality of the lizards, as does Elivia Bovenzi Blitz, who fashioned their fabulous costumes.  Randall Parsons designed the most wonderful beach, with its sand, rocks, shells, dunes, grass and reeds, complemented by the bright sunlight and cyclorama lit by Lighting Designer Matthew E. Adelson.  Scott Killian provided just the right music to begin each act, sounding like a xylophone and clarinet, suggesting something unusual and perhaps threatening.  Special thanks to Eric Hill, whose intuitive feel for all things Albee made this thoughtful, multi-layered production possible.

EDWARD ALBEE’S SEASCAPE runs from September 29—October 23 at The Unicorn Theatre, The Larry Vaber Stage, 7:00 pm Thursdays through Saturdays, 2:00 pm Saturdays and Sundays.  Tickets may be purchased by calling 413-997-4444 or online at berkshiretheatregroup.org.