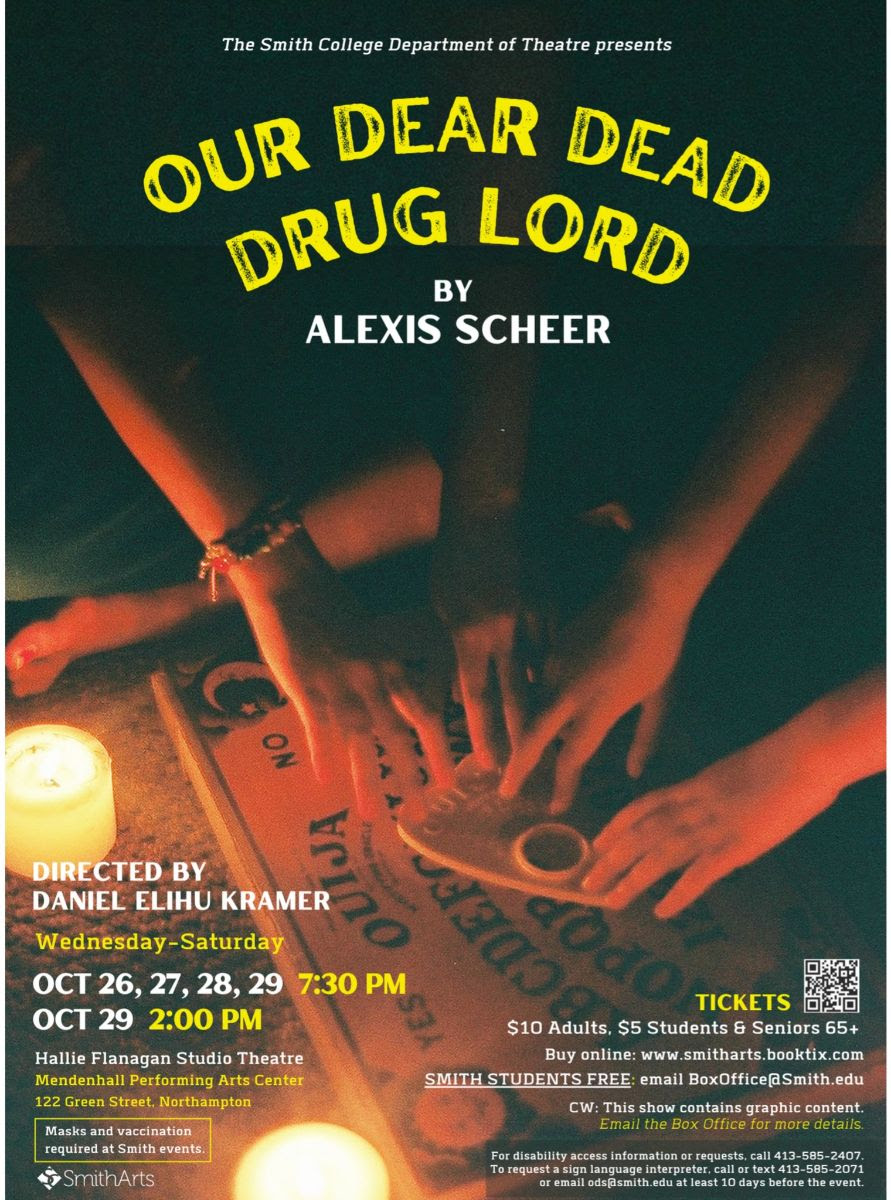 The Smith College Department of Theatre presents Our Dear Dead Drug Lord by Alexis Scheer in Hallie Flanagan Studio Theatre on October 26, 27, 28, 29 at 7:30 pm with a 2 pm matinee on October 29. A gang of teenage girls gathers in a backyard treehouse in Miami to summon the ghost of Pablo Escobar. Are they messing with the actual spirit of the infamous cartel kingpin? Or are they really just messing with each other? Directed by Daniel Elihu Kramer, the award-winning play explores teen angst in both hilarious and terrifying ways.

Alexis Scheer is a writer, performer, producer, and self-identified Columbian-American Jew from Miami. Our Dear Dead Drug Lord premiered in 2019 at WP Theater and Second Stage, and was extended three times due to popular demand.  The New York Times called it “Highly entertaining—equally funny and scary—the play starts off as a hoot and winds up a primal scream.” In a HuffPost interview, Scheer described Our Dear Dead Drug Lord as “a play about this girl gang that worships Pablo Escobar. It’s part indictment on the American celebritization of criminals and part girls just growing up and trying to figure out where the limit is—the latter is what I’m most interested in.” In another interview, she summed it up as “Mean Girls meets Narcos.”

The play features four high school students who attend a private school in Miami where they are members of the Dead Leaders Club.  The club was founded to study historical figures, but the girls have decided to take it in a more provocative direction. The club becomes a space where the girls can abandon societal expectations and exorcize personal demons. Kramer is excited to direct a play that the students are so enthusiastic about.  “The play is honestly crazy in all the best ways: one moment characters are talking about auditioning for Suessical, then they’re wondering what to write for their college essays, then they’re arguing about Castro and Che Guevara, then they’re trying to summon the spirit of Pablo Escobar.” He explains that it is rare to find a piece that gives young actors a range of characters and identities to play that speaks to their lived experiences. “I’m confident audiences will remember this one for a long time.”

Audiences should know that the play includes intense subject matter and graphic content and is recommended for people 14+.  In its four-star review Time Out says “Just when you think you know where the play is heading, there’s a disorienting coup de théâtre that leaves you shaken. Our Dear Dead Drug Lord isn’t for the faint of heart, but neither is coming of age.”  The production is open to the public in Hallie Flanagan Studio Theatre and runs Wednesday – Saturday, October 26-29 at 7:30pm and October 29 at 2pm. Tickets are $5-$10 and are available online at https://smitharts.booktix.com. Please note that masks and vaccinations are required at Smith events. For more information, email boxoffice@smith.edu.