REVIEW: “A Raisin in the Sun” at the Sharon Playhouse 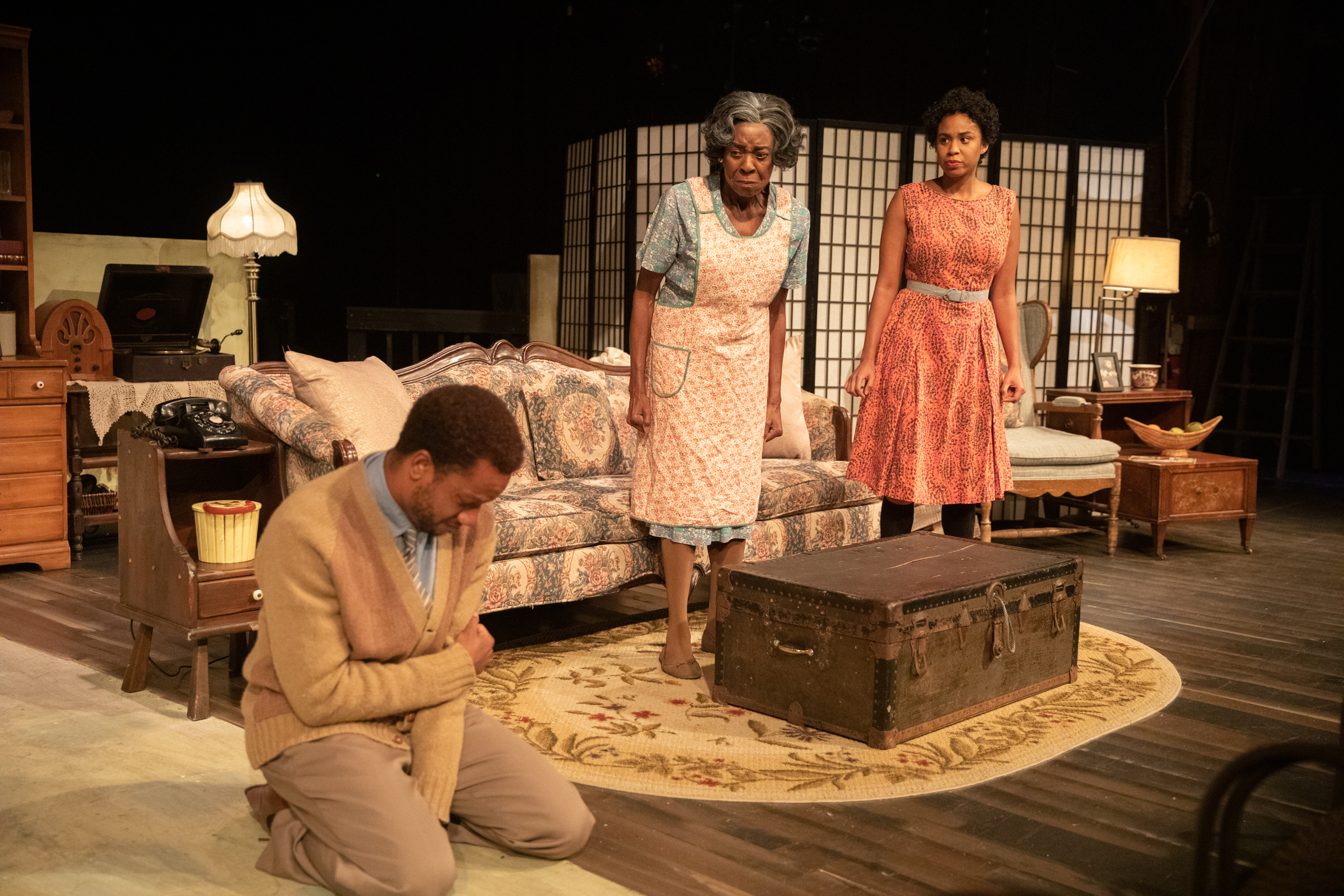 REVIEW: “A Raisin in the Sun” at the Sharon Playhouse

When entering the Sharon Playhouse to see Lorraine Hansberry’s 1959 classic A Raisin in the Sun the audience is guided to stairs leading up to the stage.  Seating is on four bleachers toward the rear of the stage and the set occupies the rest of the playing area.  The concept designed by Sharon’s Interim Artistic Director Justin Boccitto, creates an encompassing intimacy for this very moving production.   As effective as this configuration may be the total experience of the play is profound.

The play takes place in the dilapidated but clean apartment of the Younger family.  Led by the matriarch, Lena (Marjorie Johnson,) they await the arrival of a ten-thousand dollar check from the life insurance of her husband, the late Walter Younger, which in 1959 was a windfall.  She has no specific plans for the money, but her son, Walter Jr. (Donnell E. Smith) is a chauffeur who wants to use the check to form a partnership in a liquor store believing it will give him independence and he will become a man of worth.  Ruth (Maya Carter,) Walter’s wife, who works as a domestic and tends to their son Travis (Kennadi Mitchell,)  fears that their marriage is falling apart due to his obsession to succeed.  Lena’s daughter Beneatha (Kara F. Green) is a college student with aspirations to help others as a physician

The well-known plot focuses on the deterioration of the family dynamic until they are confronted by outright racism.  Lena has used some of the money as a down payment on a house which elates all but Walter.  She entrusts her son with the remainder, which he loses to a grifter.  The house, however, is in Clybourne Park, an all-white enclave.  This brings a representative of the community, Karl Lindner (Dick Terhune,) who attempts to turn the Youngers away by offering them more money.  This act motivates Walter to become the man he wishes to be and to be the guardian of the family.

There is so much more to the play than the plot that continues to resonate in contemporary times.  The picture it draws of the life of a black family in Chicago’s South Side in the ‘50’s is, in many ways, still with us.  Lena has a speech in which she traces the history of her family from slave to sharecropper to having to sit in the back of the bus.  Though these overt acts are past, the philosophy remains.  They still must struggle to maintain their existence.

Ruth decides to abort a pregnancy due to their economic hardship and Walter’s indifference. This enrages Lena who lost a child to illness. Shades of a pre- and post-Roe V. Wade world.

Joseph Asagai (Nii Adu Clerk,) a Nigerian colleague and a suitor of Beneatha, is prescient as to what his life in Africa will be like by citing possible riots, imprisonments and executions.  But he also tells her she has to live today.  In contrast, George Murchison (Michael Gene Jacobs,) another beau of Beneatha’s, is a dispassionate young man with little sensitivity.  He comes from a well-to-do family that Walter would like to emulate but disdains.

A script is the initial impetus but a powerful production requires a collaborative effort among the director, cast and designers.  This Raisin has it all.  Director Spencer Scott Barros has plumbed Hansberry’s work for all its thematic nuances while also underlining the humor in the play.  He doesn’t proselytize; rather, he lets the characters say what they think and feel.  Some of it may be heated, yet, given the circumstances, it is their truth.  Barros’s staging is economical with little wasted movement; everything that happens is telling.  The play runs close to three hours, but with the pace of his direction it flew.

The cast led by Ms. Johnson is first rate.  Lena is earthy and dignified as she attempts to lead her family despite great turmoil.  Her sometimes lengthy moralistic speeches are spoken with firmness and simplicity.  She always has our empathy.  Mr. Smith’s Walter Jr. is heartbreaking when he cries about the stolen money and fervid as he comes to his family’s defense.  It is a performance that elicits myriad emotional reactions.

Ruth is sometimes frantic, some times gentle and often frustrated by Walter.  Ms. Carter gives her a full range of finely-tuned emotions in a beautifully rounded characterization.   Kara F. Green’s Beneatha is entertainingly energetic and often hyper-exuberant, sometimes too often.  Toward the latter part of the climactic scenes her low-key delivery is very effective and endearing.

The role of Travis, performed nicely by Kennadi Mitchell, is virtually a one-note character with an occasional outburst.  Michael Gene Jacobs’ plays George Murchison with an air of superiority that rankles Walter.  They bounce off each other like a ping-pong game eliciting both humor and tension.

Karl Lindner, as portrayed by Dick Terhune, is almost likable.  In his negotiations with the Youngers he seems truly concerned as opposed to previous interpretations which are sometimes heavy-handed.  Ronnie Reed is Bobo, Walter’s friend who brings the news that the money has been stolen.  He tells the story hesitantly knowing its implications.  His delivery prompts our sympathy for him as well as the family at that difficult moment.

Boccitto’s set of second-hand furniture, mis-matched chairs, crowded kitchen counters, drab colors all draw the picture of the Younger family.  The close proximity of the audience adds to the cramped space.  We feel we are in the apartment with the Youngers.  He also designed the sound using music from the 50’s effectively employing the various vocals and instrumentals to complement each scene.  Alix Lewis’s lighting subtly sets the tone of the moment adding to the environment of the set. The costumes designed by Antonio Consuegra and Kathleen DeAngelis also dictate the Youngers’ and other characters’ social rank.

Ms. Hansberry died much too young, but with this play she has left a timeless legacy.  Raisin is a turning point in that it opened the doors of the American theatre for plays that examined African-American life and offered opportunities to Black playwrights.

Sharon Playhouse is known for its presentation of great musicals.  With A Raisin in the Sun they have taken an important step in a new direction.

This production was an engrossing and memorable theatrical experience.