REVIEW: “The Lion in Winter” at Bridge Street Theatre 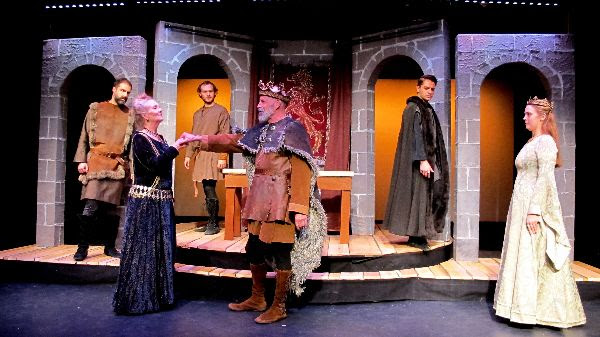 REVIEW: “The Lion in Winter” at Bridge Street Theatre

The Lion in Winter, James Goldman’s 1966 Broadway play, contains a unique mix of historical and contemporary elements.  Though the year is 1183 and the place is Henry II’s castle in Chinon, France, it’s the story of a dysfunctional family, squabbling over which of his three sons will succeed him as King.  Goldman admits to “anachronisms in speech, thought, habit, [and] custom.”  Bridge Street Theatre in Catskill has taken on the challenge of synthesizing these seemingly antithetical ingredients.

Among other historical works of the late James Goldman, an American playwright and screenwriter, are the screenplays Nicholas and Alexandra and Robin and Marian. He also adapted The Lion in Winter into a well-loved screenplay in 1968 with Peter O’Toole and Katharine Hepburn, as King Henry of England and his wife Eleanor, Duchess of Aquitaine.

The love-hate relationship between Henry and Eleanor is the play’s raison d’etre.  Eleanor (Leigh Strimbeck) is eleven years older than her husband (Steven Patterson), to whom she has been married for thirty-one years, mother of eleven children and a former Queen of France.  She has spent the last ten years in prison for inciting a rebellion against Henry, but she has been released temporarily to celebrate Christmas with her family.  Complicating the situation, Henry wants his youngest son, John (Orlando Grant), to be his heir, while Eleanor’s choice is Richard Lionheart (Seth McNeill), their oldest surviving son, to whom she has given the Aquitaine, the largest region of France.  Meanwhile, the present King of France, Philip II (Christopher Joel Onken), demands that his half-sister, Alais (Geneva Turner), currently Henry’s mistress, be married to Richard, according to a treaty agreed upon years ago, or Henry will lose her dowry. The wild card is Geoffrey (Michael Raver), the middle child, who plots and schemes with and against both sides.

It is difficult to determine the tone of this play, since the characters are constantly morphing as they manipulate each other in their struggle for power.  Goldman calls it “A Comedy in Two Acts.” There is much humor in this badly behaved family’s wrestling match—but it is black comedy.  Straight from the tradition of farce, different characters jump out from behind curtains, surprising conspirators in mid-scene.  Commenting on all the backstabbing, Eleanor, an expert at tossing off cynical observations, summarizes the action: “Well, what family doesn’t have its ups and downs?”

Also an intellectual puzzle, the play poses enormous challenges for the actors, who must be able to switch directions on a dime, as their plots are foiled and they need to try a different tack.  It is also difficult for the audience, as they attempt to follow each new twist and turn.  Who is lying?  Can we believe anyone? If they are always performing for each other, is anything real? There are no sympathetic characters here:  the cruel battle between Henry and Eleanor, who are aware of the buttons to push that can most hurt and damage one another, sets the tone for their children, who feel unloved and unwanted. The parents realize how badly they’ve destroyed their kids but they are so focused on hurting one another as a means of getting what they want that they can’t dwell on their guilt.  In the play, Eleanor is  compared to Medea, who killed her children to get revenge on her husband.  Her son Richard tells her: “The human parts of you are missing.  You’re as dead as you are deadly.”  And this is the son she hopes to anoint King, while her other son Geoffrey exclaims:  “Madam, may you rot!” After nearly two and half hours, it can get tiresome.

Leigh Strimbeck as Eleanor is most effective at delivering deadpan comic lines and shrewdly manipulating her husband and children.  She is convincing as a hard-hearted woman with nerves of steel, but what’s missing is any trace of vulnerability.  If we are to care at all about the royal couple, we need to glimpse the love that once existed between them and even now shows itself in their jealousy of one another’s lovers and the masochistic fun they have in playing their high stakes games.  Even during her alone scenes, Strimbeck doesn’t allow her pain to emerge.  Her interpretation diminishes any chemistry between them.  Steven Patterson’s Henry is just as calculating and cruel (he’s the one who has kept her a prisoner and threatens to imprison his sons as well), but his emotions are clear.  We know when he’s been stung by Eleanor, when he’s angry, drunk, lustful, and frustrated to the breaking point by his sons’ treachery.  As a result the audience may be more sympathetic to Henry.

The three sons couldn’t be more different in their personalities and attitudes:  John is sixteen and Orlando Grant portrays him as the spoiled child he is, complete with outbursts and poses; Seth McNeill’s Richard, though steadfast, is awfully muted for a powerful, politically savvy soldier; but it is Michael Raver’s Geoffrey, “the best brain of a brainy family,” who grabs our attention as the melodramatic villain, dressed in black with heavy black eye makeup, observing the action from afar and pouncing when he sees his opening.  Geneva Turner’s French princess, in a thankless role, is most convincing when she begins to fight for her place in that world.  Christopher Joel Onken’s King Phillip, though he has only been in power for three years, is exciting to watch as he pits his newly found strength and resolve against King Henry and his savage family.

John Sowle performs double duty as both director and designer.  His beautiful set certainly establishes the place and time:  the castle has stone walls, arches, multiple levels, heavy black/red curtains, and an authentic-looking Plantagenet coat-of-arms with its red background and gold lion rampant.  Sowle’s use of a revolve solves the problem of multiple settings but is cumbersome, noisy, and requires quite a bit of music to cover its turning.  Nicholas Jennings White’s original music adds enormously to the feel of the medieval period, as do Michelle Rogers’ lovely costumes. But because the set takes up most of the stage, it creates a claustrophobic atmosphere in which the actors are cramped.

As director, Sowle aims to balance the contemporary with the medieval, encouraging the actors to inhabit both worlds.  But perhaps the production could have benefited by additional rehearsal time in order to further illuminate the play’s complexities.