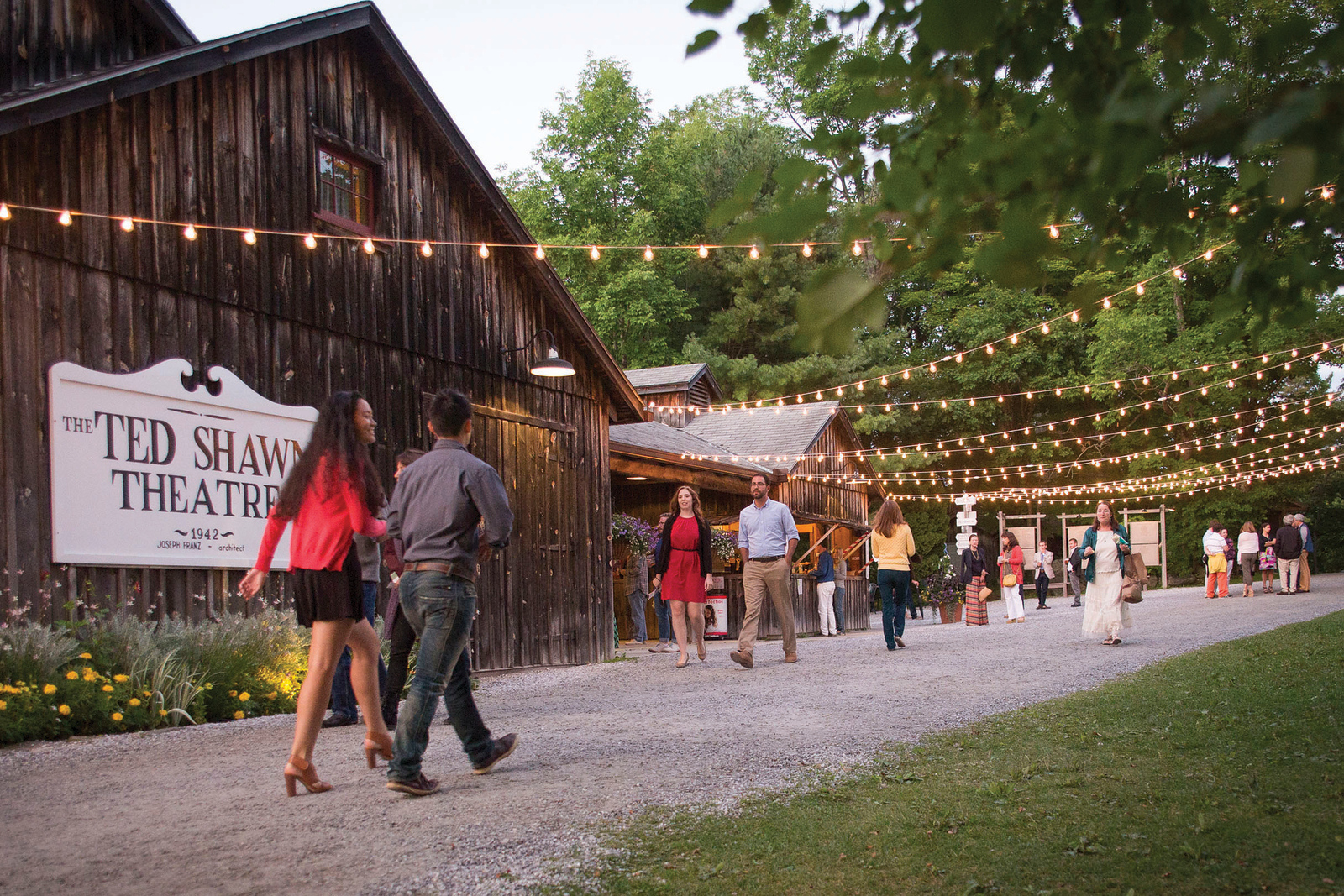 “Jacob’s Pillow has been an indispensable global leader and innovator in dance for nearly 100 years,” said Sam Gill, president and CEO of the Doris Duke Charitable Foundation. “A new, world class, digitally-driven Doris Duke Theatre will ensure Jacob’s Pillow stays at the cutting-edge in the decades to come.”

The new theater/studio is projected to cost $30 million, and will maintain the intimacy of the original theater while at the same time providing a makerspace with a digital foundation for artists seeking to integrate various technologies into live performance or create works that are native to the digital realm. It will restore a second indoor theater space for Jacob’s Pillow’s annual summer Dance Festival alongside the flagship Ted Shawn Theatre, and provide year-round studio space on the Pillow campus, in addition to the Perles Family Studio, which is home to the School at Jacob’s Pillow.

Details about the scope, scale, and features of the new theater will be made available in 2023. The new theater at Jacob’s Pillow will be one of the very few theaters in the world built specifically for dance; the Pillow’s historic Ted Shawn Theatre, opened in 1942, was the first performance space in the United States designed and built exclusively for dance.

Jeffrey Gibson, Choctaw/Cherokee, is serving as a consultant on the building’s relationship to the site and Indigenous design values, a key element of the building’s design. The Pillow seeks to honor the building’s context on the ancestral lands of the Muh-he-con-ne-ok, or Mohican peoples, who are now known as the Stockbridge-Munsee Community and reside in Wisconsin. Gibson has been participating in regular design sessions and has helped steward stakeholder engagement with Indigenous community members to seek feedback on the evolving design.

The design team was selected through a competitive, international process led by Susanna Sirefman of Dovetail Design Strategies in 2021. Since their appointment, the design team has been working with the Pillow on a conceptual design to establish a suitable budget and functional program for the project. Extensive workshops and engagement sessions have been held with community members, artists, technicians, staff members, and Indigenous stakeholders, as well as the Facilities Committee of Jacob’s Pillow’s Board of Trustees, chaired by Mark Sena, president of telecommunications company Mars Communications, Inc., and member of the President’s Advisory Committee on the Arts.

“The new theater will have all of the warmth and intimacy of the original Doris Duke while at the same time serving the needs of the dance field well into the future,” said Jacob’s Pillow Executive and Artistic Director, Pamela Tatge. “It has the goal of being a porous space with multiple configurations for maximum flexibility for audiences and artists. While responding to the landscape and the environment of the Pillow, the ambitious new theater will also be digitally equipped for immersive interactions between dance and technology. Between summer Festivals, the theater will be used as a makerspace for artists seeking to integrate technology into their live performances or create works that are native to the digital realm. It will also be a space where artists and dancers in The School who haven’t had access to digital tools can learn about new technologies and how to integrate them into their art-making.”

Speaking for Mecanoo, Houben said: “The distinct identity of Jacob’s Pillow comes from a rich history of both the site and the Festival … Our vision for the theater explores a new dialogue rooted in connecting to the senses and the land to reimagine how the dancers and the audience connect to space. These synergies aim to strike a balance between Indigenous design principles and an adaptable performance space, which creates new conversations between performer and spectator.”

As the home of America’s longest-running dance festival, Jacob’s Pillow has grown over the span of nine decades into a premier cultural summer arts destination in the Berkshires. To support the rebuilding and reimagining of the theater, the Pillow has also received a $200,000 grant award from the Massachusetts Cultural Facilities Fund, which will support the pre-schematic design phase of the project.

“Mass Cultural Council is excited to support Jacob’s Pillow in building a new theater through a Cultural Facilities Fund grant,” said Michael Bobbitt, executive director of Mass Cultural Council. “Jacob’s Pillow is an important facet of the arts landscape, both in the Berkshires and globally as a destination for dance, and we look forward to seeing the organization evolve and grow through this new building.”

The Doris Duke Theatre was built in 1989 as one of three primary performance spaces on Jacob’s Pillow’s 220-acre campus in Western Massachusetts and opened for its first full season in 1990. For 30 years, it was a beloved blackbox theater and incubator for groundbreaking artists including Reggie Wilson, Michelle Dorrance, and Kyle Abraham, as well as the place where international artists including Black Grace, Chandralekha, and Danish Dance Theater made their U.S. debuts.

The cause of the November 2020 fire was declared undetermined by state and local officials. The remains of the theater are currently on display as part of an exhibition at the Museum of Modern Art in New York City through Jan. 1, 2023. Read more here: https://www.jacobspillow.org/wp-content/uploads/2022/10/MoMAexhibition_pressrelease_FINAL.docx.pdf

The new theater will be built in the same location as the former Doris Duke, and construction is anticipated to be completed in 2025.

Jacob’s Pillow intends the reimagined Doris Duke Theatre to be a multi-use venue and future-forward performance space that makes it possible to shift the relationship between performers and viewers. The design will celebrate the Pillow’s vernacular architecture without replicating it.

The reimagined Doris Duke Theatre will be an environmentally sustainable prototype for a 21st-century cultural facility that will remain relevant for future generations, able to honor the Pillow’s reputation as a stunning site for performances while creating a new landmark on the campus that upholds and celebrates the site’s diverse history and responds to the values of the Pillow’s Indigenous inhabitants. In addition to supporting a world-renowned cultural program, the new building will afford opportunities for education about the earth and land, social diversity, and the meaning and functions of culture in America well into the Pillow’s second century.

ABOUT THE DORIS DUKE CHARITABLE FOUNDATION

The mission of the Doris Duke Charitable Foundation (DDCF) is to improve the quality of people’s lives through grants supporting the performing arts, environmental conservation, medical research and child well-being, and through preservation of the cultural and environmental legacy of Doris Duke’s properties. The Doris Duke Charitable Foundation focuses its support to the performing arts on contemporary dance, jazz and theater artists, and the organizations that nurture, present and produce them. DDCF is one of only two foundations in history to have received the National Medal of Arts from the National Endowment for the Arts, in special recognition of DDCF’s support of creative expression across the United States and “bold commitment” to artistic risk, which has helped performing artists share their talents and enriched the cultural life of the nation.

Mecanoo, officially founded in Delft, the Netherlands, in 1984, is made up of a highly multidisciplinary staff of creative professionals from 25 countries. The team includes architects, interior designers, urban planners, and landscape architects as well as architectural technicians and support staff.

Mecanoo has extensive experience designing and realizing exceptional buildings which serve client ambitions while creating vibrant end-user spaces. Each project responds to a philosophy of People, Place, Purpose, Poetry: to the client’s requirements and the user’s needs (People); the physical context, climate and culture (Place); and the current and predicted potential of a building’s function (Purpose), creating designs that touches all the senses (Poetry).

For more than three decades, Marvel has worked at the intersection of public and private space, creating intentionally timeless design solutions that integrate nature and context. Marvel is the recipient of over 125 international industry awards, including the AIA’s highest honor, the 2019 Presidential Citation for integrating design and community service. Founding Principal Jonathan Marvel will lead the firm’s efforts for the Pillow, and Partner Yadiel Rivera-Diaz will oversee the project’s landscape architecture design.

Charcoalblue is the world’s leading multinational theater, acoustic, and experience consultancy. Since its foundation in London in 2004, it has grown to a team of over one hundred with studios in New York, Chicago, Bristol, Glasgow, and Melbourne.

Drawing influence from popular music, fashion, literature, cultural and critical theory, and his own individual heritage, Jeffrey Gibson, based in nearby Columbia County, recontextualizes the familiar to offer a succinct commentary on cultural hybridity and the assimilation of modernist artistic strategies within contemporary art. Gibson’s Cherokee and Choctaw lineage has imparted a recognizable aesthetic to his beaded works exploring narrative deconstructions of both image and language as transmitted through figuration. He is known for his re-appropriation of both found and commercial commodities—ranging from song lyrics to the literal objecthood of punching bags—repurposed through Minimalist and post-Minimalist aesthetics, which speaks to the revisionist history of Modernist forms and techniques. His sculptures and paintings seamlessly coalesce traditional Native American craft with contemporary cultural production and references, forming works that speak to the experience of an individual subjectivity within the larger narrative defining contemporary globalization.

Gibson is a 2019 MacArthur Fellow. He holds a MA from the Royal College of Art, London, a BFA from the School of the Art Institute of Chicago, and was awarded an Honorary Doctorate from Claremont Graduate University, Claremont, Calif.

Jacob’s Pillow is a National Historic Landmark, recipient of the National Medal of Arts, and home to America’s longest-running international dance festival, having just celebrated its 90th Anniversary Season. Jacob’s Pillow acknowledges that it rests on the unceded lands of the Muh-he-con-ne-ok and recognizes the Agawam, Nipmuc, and Pocumtuc who also made their homes in Western Massachusetts. We honor their elders past, present, and future. Each Festival includes national and international dance companies and free and ticketed performances, talks, tours, classes, exhibits, events, and community programs. The School at Jacob’s Pillow, one of the field’s most prestigious professional dance training centers, encompasses the diverse disciplines of Contemporary Ballet, Contemporary, Tap, Photography, Choreography, and an annual rotating program. The Pillow also provides professional advancement opportunities across disciplines of arts administration, design, video, and production through seasonal internships and a year-round Administrative Fellows program. With growing community engagement programs, the Pillow serves as a partner and active citizen in its local community. The Pillow’s extensive Archives, open year-round to the public and online at danceinteractive.jacobspillow.org, chronicle more than a century of dance in photographs, programs, books, costumes, audiotapes, and videos. Notable artists who have created or premiered dances at the Pillow include choreographers Antony Tudor, Agnes de Mille, Alvin Ailey, Donald McKayle, Kevin McKenzie, Twyla Tharp, Ralph Lemon, Susan Marshall, Trisha Brown, Ronald K. Brown, Wally Cardona, Andrea Miller, and Trey McIntyre; performed by artists such as Mikhail Baryshnikov, Carmen de Lavallade, Mark Morris, Dame Margot Fonteyn, Edward Villella, Rasta Thomas, and hundreds of others. On March 2, 2011, President Barack Obama honored Jacob’s Pillow with a National Medal of Arts, the highest arts award given by the United States Government, making the Pillow the first dance presenting organization to receive this prestigious award. The Pillow’s Executive and Artistic Director since 2016 is Pamela Tatge. For more information, visit www.jacobspillow.org.