2023 Virtual Live-Staged Readings with The Two Of Us Productions 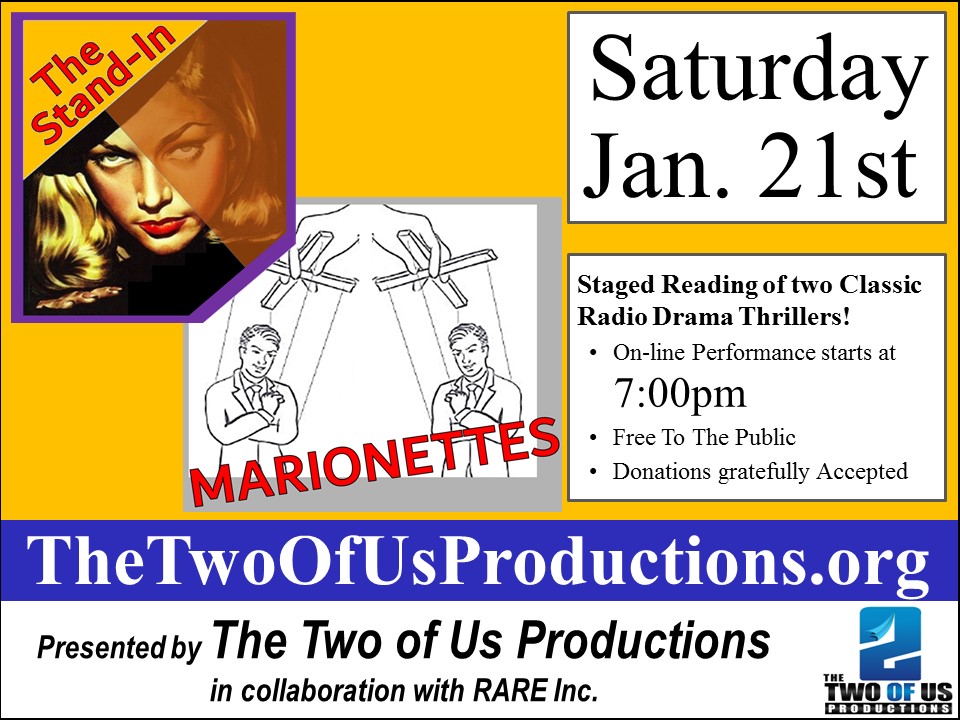 2023 Virtual Live-Staged Readings with The Two Of Us Productions

COPAKE, NY —The Two Of Us Productions, the award winning theater company based in Columbia County NY, is pleased to present their Virtual Live-Staged Reading Series for 2023.  Our 1st installment is two exciting radio dramas: from Suspense Theater we present “The Stand-In” and from Dimension-X we give you “Marionettes”.  This performance is being presented on Saturday evening January 21st, 2023 at 7:00pm in collaboration with Roving Actors’ Repertory Ensemble (RARE) Inc.

In Suspense Theater’s “The Stand-In” we meet Diana Burke, a talented actress chafing under her role as a stand-in for the famously imperious actress Madame.  It turns out that Madame’s husband Dennis O’Brien is also chafing under his role as the most recent & always supportive spouse.  Together, Diana and Dennis decide they’d each rather play a leading role together, but without Madame.

In “Marionettes”from Dimension-X we meet two happily married men:  Henry Smith and Walter Graeling.  Henry loves his wife, but would like more time with the boys.  While grousing at the local watering hole, Walter tells Henry that he has just the thing to solve Henry’s problem.  It turns out though, that what is good for the gander is also good for the goose in this strange tale of technology replacing reality.

To learn the rest of these thrilling stories you’ll have to R.S.V.P to www.TheTwoOfUsProductions.org and then see these thrilling dramas in the comfort of your own home on Saturday night January 2st, 2023.

“The Stand-In” and “Marionettes” will be performed as a live-virtual staged reading on Saturday January 21st, 2023 at 7:00pm.  Hurry to R.S.V.P and get your access code by visiting www.TheTwoOfUsProductions.org . This performance is free to the public, donations are gratefully accepted.

The Two Of Us Productions is well known throughout the Hudson Valley for presenting quality theater, both musicals and dramas.  Their recent productions of Sweeney Todd, Cabaret, A Shayna Maidel, Young Frankenstein, Deathtrap, Chicago, Les Miserables, next to normal, Mamma Mia! and Jesus Christ Superstar were all recognized by the Theatre Association of NYS with multiple awards, including outstanding work by the company, excellence in direction & multiple individual performer awards.

These performances are supported with funds from Hudson River Bank & Trust Foundation, Stewart’s Shops, Key Bank, Rheinstrom Hill Community Foundation, Bank of Greene County, Greylock Federal Credit Union and The American Endowment Foundation.  This project is made possible with funds from the Statewide Community Regrants Program, a regrant program of the New York State Council on the Arts with the support of the Office of the Governor and the New York State Legislature and administered by CREATE Council on the Arts.”