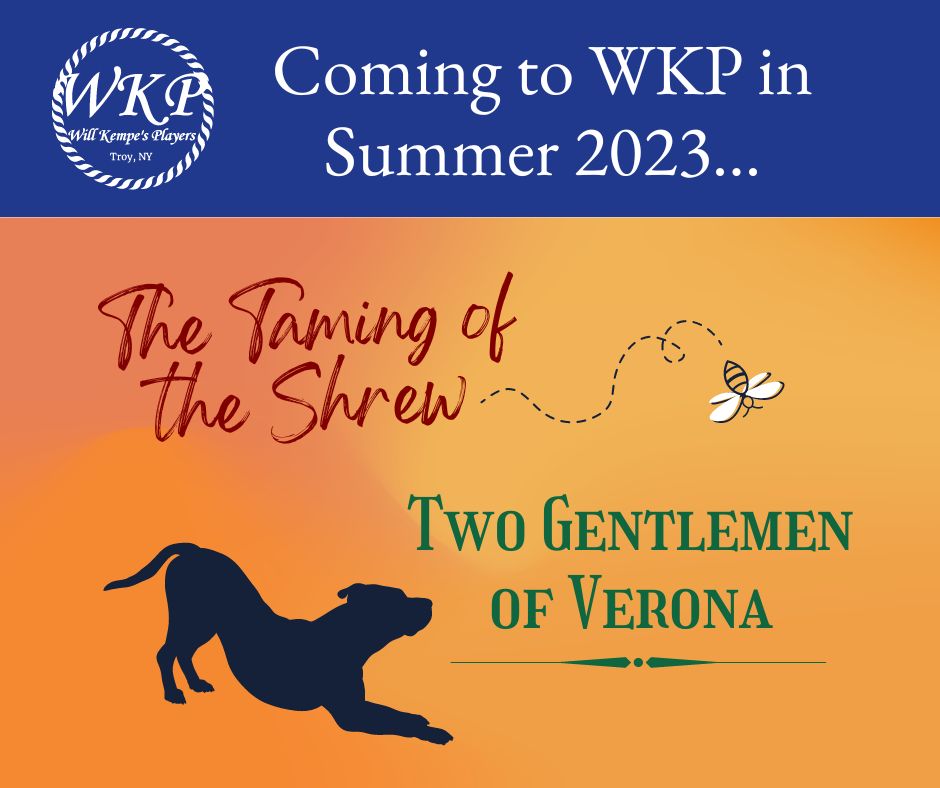 Bromance, cross-dressing, betrayal, mean pranks, loud arguments, men behaving badly, women giving as good as they get, and an on-stage dog—Will Kempe’s Players, the Capital District’s professional original-practices touring Shakespeare company, is pleased to announce its Summer 2023 season. This year, we’ll be doing two of Shakespeare’s first comedies: “The Taming of the Shrew” and “Two Gentlemen of Verona.” They’re early, but they’re still the Bard, so both plays are funny, both plays are substantial, and both plays contain some of the most beautiful dramatic poetry known to humankind. We’re aiming both to satisfy some happy-ending expectations and toss in lots o’ laughs and some surprises along the way.

WKP’s mission is to bring the practices and conditions of the Shakespearean stage into the 21st Century. So we use Shakespeare’s original 16th-Century text, and we try to have what he had and do what he did: a collaborative and rigorous creative process, bare-bones staging, sumptuous Elizabethan costuming, and mostly daytime performances presented mostly outdoors. Come July and August, we’ll be roaming the Capital District in our unmistakable green school bus, presenting the plays in repertory on weekends and going wherever a local venue wants two days of low comedy and high culture. Follow us here on Facebook and Instagram, or check our website regularly for updates as we firm up our summer schedule. We hope to see you then!

And meanwhile, we’ll be casting the plays, and not just with ourselves. Auditions will be in late January, exact dates TBD. Stay tuned at willkempesplayers.com/auditions if you’re interested!