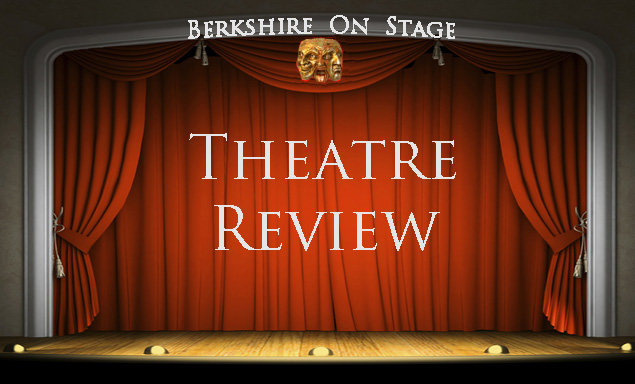 Carl Ritchie has trained the good people of Columbia County and vicinity to turn up at the Lighthouse Marina every summer for a nice dinner and an hilarious evening of theatre. I don’t live anywhere near Copake Lake, and I’m hooked! Something about arriving at that glorious lakeside on a warm summer’s evening just does it for me.

And so did this show. “The REAL (Desperate) Housewives of Columbia County” (henceforth referred to as “Housewives” to save my poor fingertips all that typing) is even funnier than “I Know I Came In Here for Something” and boasts a splendid cast of beautiful, talented women “of a certain age” – I like to call them “vintage,” like a good wine that improves with age – who can sing and deliver a gag with equal aplomb.

Ritchie has written a boffo script and lyrics and the ladies deliver the goods. Joanne Maurer has designed a parade of gorgeous outfits that range from refined to racy, with a little frumpy and silly thrown in for good measure. Wayne Moore’s music isn’t memorable, but it is singable and bounces right along. I loved how most numbers began with a cheerful flourish on the piano by Musical Director John Moran to establish the key for the singer(s) and let us know we were in for another great song.

“Housewives” is really just an excuse for these lovely ladies to wear glorious gowns and sing silly songs. I confess I have never watched either “Desperate Housewives” or any of those “The Real Housewives of…” reality shows. I considered doing so as “research” for seeing this show, but I found I had neither the time nor the inclination to investigate the genre, so I can only assume that what passes for a plot bears some resemblance to what goes on on these shows. Here the five women are participants/contestants on a reality TV show and the “winner” gets her own solo spin-off series. The audience acts as the “camera” they must address, and the solo numbers constitute entries in their “video diaries” calculated to endear them to the viewers and earn their votes.

Meg Dolley is Melody, a thrice married, ridiculously wealthy “weekender,” a former child star on Broadway, she is a self-proclaimed bitch who has had plastic surgery on just about every body part imaginable. She employs Danny (Diedre Bollinger) and her (unseen) husband Jake to run her Columbia County property for her. Danny is a local and decidedly unglamorous. Maurer has a lot of fun with Bollinger’s costumes but rest assured that she does get a pretty dress in the end.

Melody’s arch rival is the divorced and man-hungry Carol (Constance Lopez), another weekender, and the two repeatedly have modest “cat fights” calculated not to muss their hair, make-up, or designer clothes. Rebecca (Rachel Weisman) is a transplant, having moved to Columbia County full time and gotten her real estate license after her husband decided he was ga and left her for another man.

And Katrina (Cathy Lee-Visscher) is the only one who is married and has children. She is ridiculously proud of her Dutch heritage and doesn’t think you can really call yourself local unless you can go back at least ten generations in the graveyard at the Dutch Reformed Church. She and Danny have a lot of fun at the expense of the newcomers, who they call “Citidiots.”

Ritchie knows his actresses and has obviously tailored each role to the performer. Dooley is a stand out as the uber-bitchy, filthy rich Melody, and her over-the-top mannerisms make an easy target for Danny’s ridicule. Either Bollinger gets all the funniest material or she is the funniest actress of the lot, or both. Whenever she appears you are guaranteed a guffaw, especially in her odes to plastic surgery and, um, “plumber’s butt.”

Lee-Visscher turns on the charm and has them rolling in the aisles as she comes clean about her feelings for Johnny Depp and joins with Bollinger on a harangue about that impossible to eradicate invasive species, the City Folks. The Dutch gags get to be a bit much, but Lee-Visscher pulls them off.

Lopez and Weisman are the weaker comediennes here, but they both look swell and sing sweetly. Lopez is a fine dancer, although she can’t get in too many fancy moves on the miniscule stage at the Marina. She puts all other middle-aged women to shame by appearing in bathing suit (In public, on stage, no less!) and looking both beautiful and happy. I was impressed!

There is no better advertisement that life begins at forty than watching these lusty ladies strut their stuff. Butcautious parents and those with a low threshold for low humor should be warned that this is a show about adult women who are well past the age of consent and discretion. There are songs about the joys of being a bitch, Happy Hour, and heterosexual romps with just about every type of man except the one you’re married to. They also address the annoyances of menopause and plastic surgery, and both locals and city folks take potshots at each other’s way of life. It’s hilarious, but its not for the kiddies.

This is dinner theatre, with a meal served an hour before show time and dessert and coffee available at intermission. While the dining room set-up does hinder the sightlines a bit (Note to Ritchie: Don’t right a song about shoes if only the front row can see the performers’ feet!) I have to say I enjoy being able to sip a beverage (non-alcoholic, of course!) during a show.

A gentle reminder to the…”gentlemen” is too strong of a word…the males in the audience that this is NOT a house of burlesque and to keep their appreciation of the ladies down to one polite wolf whistle or murmur of approval. I mean, the gals do look gorgeous and are there to be admired, but there are boundaries, which some fellows definitely overstepped on opening night.

“Housewives” ranks right up there with “The Hound of the Baskervilles” as one of the funniest shows of the season. Don’t let the remote (but beautiful!) lakeside location or the term “dinner theatre” scare you away. Find yourself and dinner date and go out and have a ball!

The Taconic Stage Company production of “The Real (Desperate) Housewives of Columbia County Musical!” is performed on Fridays and Saturdays beginning July 29 through Labor Day weekend, 2011. Dinner and show cost $40, with a full cash bar available. Dinner starts at 7 p.m., show at 8 p.m. There will also be three special brunch shows: August 7, 14 and 21, with the meal at 1 p.m., show at 2 p.m.

For tickets and information call 518-325-1234 or go to www.TaconicStage.com Or email TaconicStage@aol.com to have your name added to their email list.