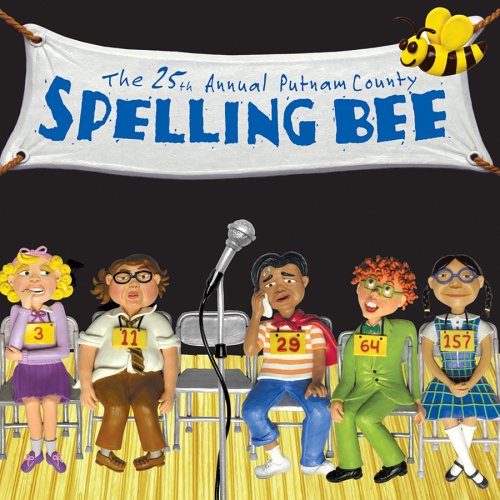 I defy anyone to dislike this show. It is just so funny and heartwarming, and contains some truly beautiful songs penned by William Finn. There’s something here for the whole family to enjoy. What’s not to like?

“The 25th Annual Putnam County Spelling Bee” had its genesis with an NYC improv troupe called The Farm. They worked it up into a long-form skit titled “C-R-E-P-E-S-C-U-L-E” which caught the attention of Finn, who brought his musical version to Julianne Boyd at Barrington Stage back in 2003. BSC gave the show a workshop production in February of 2004, and then a full Main Stage production that summer, both of which were very well received. So “…Spelling Bee” made its way back to the city where it sold out its off-Broadway run and then moved to Broadway in May 2005 for a two-and-a-half year run at the Circle-in-the-Square, closing this past January. It was nominated for six Tony awards and took home two – one for Rachel Sheinkin’s hilarious book, and the other for Dan Fogler’s bravura performance as William Barfee (pronounced, he insists, Bar-fay).

I saw the February 2004 workshop production, but not the summer one at Barrington Stage because I wasn’t yet officially reviewing for the company. In other words, I bought a ticket and I went. And I wrote about it. It was not open for review, but, as I said, I wasn’t there as a critic. I am glad to have a written record of my impressions then. I feel blessed to have had a chance to see that phenomenal original cast (all but three of the actors I saw went on to Broadway with the show) in a very intimate space.

Now the “…Bee” has come home to Barrington Stage in its first regional production to open the 2008 summer season, and it is just as funny and delightful as I remembered its earlier incarnation to be. It is also much better looking – it has a set! – and its humor is much more sharply focused.

The premise is simple. Six pre-teen spellers – William Barfee (Eric Petersen), Leaf Coneybear (Clifton Guterman), Olive Ostrovsky (Molly Ephraim), Marcy Park (Emy Baysic), Logainne Schwartzengrubinierre (Hannah DelMonte), and last year’s champ Chip Tolentino (Miguel Cervantes) – are assembled in a school gym to compete in the 25th annual Putnam County Spelling Bee. (The workshop production was obviously set in nearby Putnam County, NY, but since then it has been asserted that the show does not take place in any specific state or locale.) They are joined by four volunteers recruited from the audience before the curtain goes up. Your hostess is local Realtor Rona Lisa Perreti (Sally Wilfert), a former County spelling champ, and Vice-Principal Douglas Panch (Michael Mastro), who had a minor “incident” at the Bee five years earlier and hasn’t been invited back since, is the word pronouncer. Once you are eliminated, you receive a hug and a juice box from Mitch Mahoney (Demond Green,) a parolee sentenced to serve as Spelling Bee Comfort Counselor.

The first half of the show is basically an hilarious take on a real life spelling bee. The rules are recited and observed. Some of the funniest moments of the show come during the sotto voce introductions of each speller – improvised on the spot for the audience volunteers – and the word definitions and sample sentences provided by Wilfert and Mastro.

In the second half of the show there is more emphasis on character development through song and mini-flashback scenes in which we learn a little more about the spellers’ home lives and families. This section is what caused New York Times critic Charles Isherwood to refer to “…Spelling Bee” as “‘A Chorus Line’ with pimples.” This sudden turn towards introspection does dampen the comedy and slow down the momentum of the show considerably, but here Finn lets loose with some of his most soaring melodies and these imperfect young people struggling out of childhood’s cocoon are so lovingly portrayed that it is inevitable that you sat next to one of them in junior high school, or you were one of them, or you recognize a child or grandchild in your life.

I speak of the show having two distinct halves, which it does, but it is performed without an intermission, which seems to me a puzzling decision. Two hours is a long time to sit without a break, even in the very comfy seats of the BSC Main Stage, and this is hardly a show people are likely to flee. Plus there’s all that money that could be made selling drinks and snacks (and “…Spelling Bee” mugs and t-shirts) at intermission.

Based as it is in improv, the characters in “…Spelling Bee” are closely affiliated with their creators. So there is a certain onus on subsequent productions and performers to replicate the originals – to look like them and sound like them. My biggest concern was that I would find the new cast pale imitations of their originals, particularly whoever had to fill the enormous shoes (one of which contains that magic foot) of Mr. Barfee. The good news is that this is a fabulous cast, particularly Petersen who brings his own special brand of nerdliness to the nasally challenged Mr. Barfee, and Guterman, who is lovably loopy as the home-schooled Leaf Coneybear.

Outstanding performances are also turned in by Ephraim and Green.

I was bugged in 2004 and I am still bugged by the concept that a parolee would be assigned to hug pre-teens at a spelling bee. I mean, I work at a church and we have to run background checks on our Sunday School teachers! But I should learn not to take anything in musical comedy too seriously and the presence of the very talented and appealing Green in this cast, under any pretext, is a cause for celebration. Green won me over in last summer’s “Funked Up Fairy Tales” and I was glad to see him back on the BSC stage.

One of the most powerful musical moments comes late in the show when Ephraim teams with Green and Wilfert, playing Olive’s parents and not their regular roles, on “The ‘I Love You’ Song.” Its just great music beautifully sung, and with an important message about family love transcending our human failings and frailties.

Cervantes looks a tad too old to be a believable youngster, but he won me over with his frenetically funny delivery of his solo “My Unfortunate Erection” (yes, I read it right) during which he hurls candy throughout the audience with all the pent-up frustration of unrequited early adolescent desire. He is also very funny as Jesus (yes, Jesus Christ, son of the Virgin Mary and all that) who comes to assure Marcy Park that its all right to lose, and that spelling bees are really all that important in the grand scheme of things.

Baysic is just as perfect as the perfect Marcy Park should be. This is a girl who speaks six languages, does the splits, takes over the piano from Musical Director Brian Usifer during her solo, and only remembers people who score in the top ten of the Bee. She is also Asian, the name Park would most likely be Korean, and so her drive to succeed is culturally based, while Logainne’s has been practically beat into her by her two domineering dads.

I had the hardest time with DelMonte’s Logainne, largely because she didn’t look like Sarah Saltzberg’s original. It may be that Saltzberg owns the rights to the character’s trademark tightly wound braids that extend from the top of the head like antennae. DelMonte certainly had Logainne’s stiff self-control and lovable lisp down pat, but she lacked that deer-in-the-headlights terror that Saltzberg projected so well.

Wilfert, last seen at BSC in Finn’s “Elegies,” sings divinely throughout, and gives Rona a special humanity in her interactions with the spellers and her colleagues, who often behave worse than the so-called children. Mastro has his best moments when he is delivering Sheinkin’s howlingly funny word definitions and sample sentences.

The audience participants the night I attended were just wonderful, the best being the young man with the Liza Minnelli haircut who actually spelled even the word designed to eliminate him correctly, earning him a hilarious seconds-long silent glower from the cast. That is another reason this show should have an intermission, so everyone can congratulate the volunteers and console them on their early elimination. (Everyone gets a hug, a juice box, and a vigorous musical good-bye assuring them that they were “good, but not good enough” as they depart the stage.)

Beowulf Boritt (now there’s a good name for a spelling bee!), who designed the Broadway set has done the same here. It is a clever, cockeyed look at a typical school gym, with some very theatrical surprises hidden within. The costumes that convincingly turn adults into children were designed by Jennifer Caprio. Jeff Davis has provided seamless lighting, but sound designer Michael Eisenberg may need to fine tune the balance between singers and the musicians. (All you see of the five piece band is Usifer at the piano, the rest are hidden behind a bank of gym lockers.)

This really is a show the whole family can enjoy together, and BSC offers discount tickets for students and seniors to make the adventure a little more affordable. Berkshire County can be proud of helping to birth this musical. It is time to welcome the spellers back home.