How the Arts Lottery turned into the local Massachusetts Cultural Councils 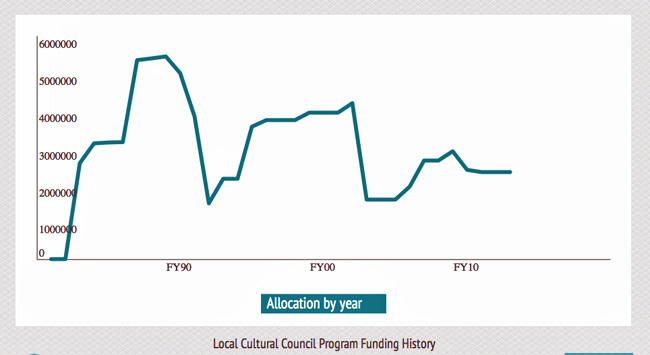 History of the LCC Program

with commentary by Larry Murray

Every time one of our local Berkshire Cultural Councils meets, I get a real lift. The councils meet to review grant applications and give out grants funded through a program I helped Jackie O’Reilly create half a lifetime ago. I was privileged to be on the initial guidelines committee and the basics have remained largely the same for all these years. One of the roles I proposed – to limit the number of times someone could serve on the committee – came back to bite me when I served on the Boston Arts Lottery Council, off and on, for more than a decade. Since I had seen the performances and exhibits of just about every applicant, they kept asking me back. I was a non-voting advisor for many of them.

After the arts lottery took off with Megabucks those of us who were involved saw the local arts scene take root in every community in Massachusetts, and had high hopes that it would take root and grow dramatically. Alas, that was not to happen as much of the arts lottery proceeds were diverted for more mundane uses.

Nevertheless,the Arts Lottery continues – as the Local Cultural Councils – and remains an important component of arts funding even today. Its early story should not be forgotten. There is a lesson to be learned from it. (LM)

The MCC’s Local Cultural Council Program distributes funds to local and regional cultural councils, which then regrant funds to arts, humanities, and interpretive science projects in their own communities. The program started in 1980 under the Massachusetts Arts Lottery Council. Read more about key dates in program’s history.

In 1971 Arts advocate Jacqueline O’Reilly conceived of the idea of using a lottery and a portion of its profits to give money to the arts. The program was inspired, in part, by a similarly designed lottery program that was being formed in Australia at the time and is now calledlotterywest.

See Mrs. O’Reilly’s son talk about the life and achievements of his mother.

Mrs. O’Reilly and other advocates worked tirelessly with the state legislature and governor to come up with a program that would support community arts in the state of Massachusetts. In 1973 the state Legislature established a Special Committee on the Arts to investigate ways of improving state arts funding at the community level in response to federal funding cuts to arts and culture. In 1976 the idea for a state lottery was introduced as a source of revenue for the arts.

After a slow start, in November of 1982, the Arts Lottery was reintroduced as the very successful game “Megabucks.” It only cost $1 to play, featured a draw of six numbers from a field of 30, and included a jackpot prize that increased with each drawing until won. The financial success of Megabucks led to a cap on the percentage of lottery funds reimbursed to the general fund, which went to arts and culture. The legislature also introduced the first minimum allocation for Local Cultural Councils, which was $1,000.

MALC merged with the Massachusetts Councils for the Arts and Humanities to form the Massachusetts Cultural Council (MCC) in 1990. Cuts in the state budget resulted in subsequent cuts to the MCC’s budget, reducing funding for the LCCs. Many programs were downsized or severely limited due to lack of funding. The mid-1990s were spent rebuilding the funding base for community arts and culture.

The Leadership Circle Awards were created in 2004 to recognize LCC volunteers for their outstanding work in support of the Local Cultural Council Program.

The LCC Program remains the most extensive volunteer-run, cultural funding program in the nation: 329 LCCs served every city and town in the Commonwealth, distributing more than $3.3 million to over 5,000 projects across the state.