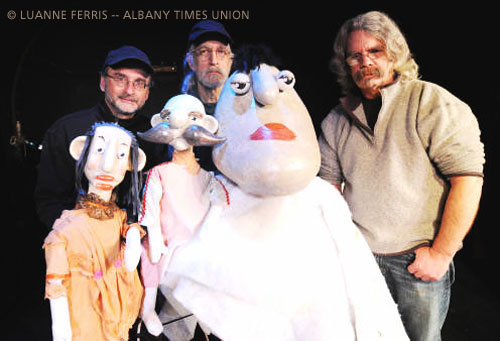 When “Ubu Roi” by Alfred Jarry (1873-1907) was first produced in Paris in December 1896 the audience rioted at both preview and opening night performances, after which future productions of the play were banned for more than a decade.  This is a fact you learn in Drama 101.  Why did they riot? Well, for one thing the first word of the play is “Merdre” which is the French “Merd,” the equivalent of the English “Shit,” with an extra syllable added.  They heard that, went nuts, and never recovered because that was just the first of a five-act volley of attacks on royalty, religion, and social mores that constitute the play. “Ubu Roi” is lewd, crude, and rude, and parts of it remain shocking and offensive even now in an age when the word “Shit” has morphed into a greeting for friends on the street (as in “Shit, man, how you doin’?”)

“Ubu Roi” changed the world, not just the world of theatre, but the whole world as Jarry’s influence spread to the fine arts world and thence to society as a whole. Pablo Picasso was fascinated by his work and bought many of Jarry’s manuscripts and possessions, most famously his gun, after Jarry’s untimely death at the age of 34.

Throughout my theatre-going life I have pursued authentic productions of Ubu plays, and have utterly failed until now. The Williamstown Theatre Festival mounted a completely bastardized “family friendly” production “Ubu the King” in 2003. I much preferred Confetti Stage’s 2007 production of “Bushwa: A Modern Ubu”, a highly entertaining contemporary play by John Morogiello that casts former President George W. Bush as Jarry’s monstrous usurper.

So I was beyond excited when Steamer No. 10  announced that they were hosting a production by Firlefanz Puppets of Oakley Hall III’s  adaptation “Ubu Rex,” directed by the author, for one weekend in early January. This was literally my first opportunity in over half a century of life to see something approximating Jarry’s original.

Ubu (pronounced Oo-boo) is the name of the protagonist and his wife. If it is familiar to you it is from the familiar sign-off of Ubu Productions – “Sit, Ubu, sit. Good dog.” – which produced such television hits as “Family Ties” and “Spin City.”  Or maybe from the name of the band, Père Ubu, both proof that Jarry’s Ubu still has a big influence on our world.

In the original French the principal characters are Père and Mère Ubu, often rendered in English as Pa and Ma. The title “Ubu Roi” is variously translated “King Ubu,” “Ubu the King,” “Ubu Rex,” and, oddly, “King Turd.”  Jarry wrote two further Ubu plays – Ubu Cocu (“Ubu Cuckolded”) 1901 and Ubu Enchaîné (“Ubu Enchained” or “Slave Ubu”) 1900, neither of which was performed during his life time, and which are incoherent to the point of being unperformable (Jarry was addicted to absinthe.)

A 1901 puppet version of “Ubu Roi” called “Ubu sur la butte” (“Ubu on the Hill or “Up Ubu”) was allowed to run for 64 performances because it wasn’t being performed by live actors, (just exactly who the authorities believed were manipulating and voicing the puppets remains a mystery, but their descendants must be the people who decided that Bert and Ernie were gay), and it was this that Picasso, Guillaume Apollinaire, and other young members of the Paris arts community saw.

You will notice that I have written a lot about translation, even of words like Père, Mère, Roi, and others that everyone learns on the first day of their first year studying French, and that is because translating Jarry is highly problematic and every word matters.  “Ubu Roi” is not so much written in French as it is concocted from words and sounds from that language made to carry their original meanings and more. Portmanteau words, as Lewis Carroll would say. As David Ball wrote in his article UBU-ing a Theatre-Translation: Defense and Illustration in the journal Metamorphoses, “Flatten the language into ordinary English and the play simply disappears.”

Needless to say over the past century many people have tried to sanitize and flatten Jarry’s play in many ways.  Hall claims to have condensed and streamlined his translation, which he has been playing with a refining for decades.  The fascinating story of Hall’s life, theatrical and personal, his ongoing association with Jarry’s works (he is the author of “Jarry and Me: The Autobiography of Alfred Jarry”), and the connections that led to this Firlefanz collaboration is clearly told on their Web site, at Nippertown.com, and in the January 7, 2010 Albany Times-Union article  by Steve Barnes.

Barnes quotes Hall as saying that he thinks his “Ubu Rex” works better with puppets than with human actors: “It’s a very curious play. It’s not really a play but a collection of strange lines that work very well coming from puppets. If an actor has to say the lines, they’re always asking, ‘Why am I saying this?’ But coming from a puppet, we accept it.”

I found Hall’s script  a little too flat. People have written about how hilariously funny Ubu plays can be, and Hall’s adaptation missed hilarious by miles.  It also missed being particularly shocking and provocative in my opinion, but then you have to bear in mind that I knew what to expect.

And I found the Firlefanz puppets, although handsome and artistically crafted, to be too wooden to hold my interest.  Some, notably the Ubus, were obviously purpose built for this production and some appeared to be generic figures which could be used in a variety of productions. They were manipulated by non-speaking puppeteers, who were clearly visible, and voiced by actors who were hidden.

Only Firlefanz puppetmaster Ed Atkeson, who was manipulating Ubu himself, managed to silently embody the character and emotions he was enacting. The other puppeteers seemed more focused on moving their puppets than in the lines they were supposed to be acting out.  None of the puppets had movable facial features, and by the time of the bear in the cave scene (that was a great bear costume/puppet, by the way!) I found myself completely bored looking at these inanimate lumps.  This is probably the reason most puppet shows don’t run two hours.

I wonder how I would feel about Hall’s script seeing it performed with live actors? Steven Patterson, who voiced Ubu, has known and worked with Hall since their days with the now legendary Lexington Conservatory Theatre, and according to Barnes’ article has performed in three productions of Hall’s “Ubu Rex” – with live actors in New York City in 1976, with actors made up to look like giant hand puppets with Lexington in 1977 and, now, as the voice of Ubu.

Mary Jane Leach and Michael Eck created and generated the musical score for this production, most of which had been prerecorded or crafted electronically but some layers of which were added live during the performance.  It consisted of slightly mangled versions of well-known classical works such as the Dance of the SugarPlum Fairy, In the Hall of the Mountain King, The William Tell Overture, the 1812 Overture, and the ilk.

The score had been mixed in much the way Jarry mixed conventional French with his own invented idioms. If only Hall’s English translation had followed suit.  He tells Jarry’s story, but he’s taken all the rude, school-boy fun out of it.  In his brief introduction to the script Hall ponders whether Jarry might be writhing in his grave over his translation/adaptation, and decides that he probably wouldn’t be.  I think otherwise. Hall loves Jarry, but he takes him way too seriously.

If you didn’t catch the Firlefanz production at Steamer No. 10 the weekend of January 8-10, 2010, you’ve missed it for the time being. I don’t know of any future productions planned at the moment, but you can be sure that if one is mounted in this area, I’ll list it on Berkshire on Stage!