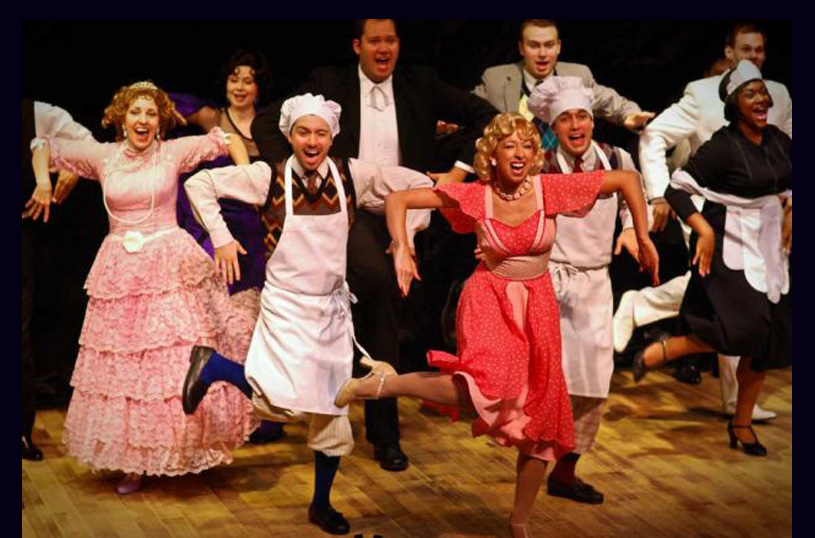 Continuing until September 4, the whole concept of the show The Drowsy Chaperone sounds sort of goofy, and it is. But it works. The musical has a simple premise, the Man in Chair (Craig Treubert) puts an original cast recording on the turntable and it comes to life in his living room. Actors, singers and dancers literally appear out of the woodwork as the music plays. The audience, most of whom, like me, did not know exactly what to expect quickly found themselves enraptured.

This is a show that was created for lovers of musical theatre. If you are among the millions of Americans who delight in them, you will find that the Theater Barn’s production, a Berkshire area premiere, is pure heaven. It is funny, swift moving and during its two hour performance it will mesmerize, charm and beguile you with its over the top performances.

With fourteen members to the cast this little show becomes the most spectacular production in years to take to the modest sized Theater Barn stage. Under the steady (and highly imaginative) hand of Director Bert Bernardi – a Theater Barn regular – this Drowsy Chaperone literally swoops and soars – at the end everyone crowds into Trix the Aviatrix’s imaginary plane to take off for Rio. As Trix, Keisha Gilles leads the company in “I Do I Do In The Sky” as the show buzzes to its closing.

The Drowsy Chaperone started in 1997, when McKellar, Lambert, Morrison and several friends created a spoof of old musicals for the stag party of Bob Martin and Janet Van De Graaff. In its first incarnation, there was no Man in Chair, the musical styles ranged from the 1920s to the 1940s, and the jokes were more risqué. Several iterations later, it opened on Broadway in May 2006 at the Marquis Theatre, and closed on 30 December 2007 after 674 performances. The show won the Tony Award for Best Book and Best Score. Jersey Boys won Best Musical. “They wuz robbed.”

The story revolves around Janet (Lara Hayhurst) and Robert (Tom Garruto) who are planning to marry. The Drowsy Chaperone (Jerielle Morwitz) is supposed to keep her from seeing her husband before the wedding itself. Janet is the star of a musical and her marriage threaten to derail its run, so producer Feldzieg (as in Feldzieg’s Follies, get it?) tries to thwart it by hiring the Italian lover and lothario Adolpho (Matthew Daly) to seduce Janet but he seduces the Chaperone instead. Meanwhile, Kitty (Nicole DiMattei) is trying to grab Janet’s top spot, but she is a helium-voiced, bottle-blonde bombshell who can’t act her way out of a paper bag. Her voice is as close to fingernails on a blackboard that I have ever heard. In other words, simply wonderful.

Matthew Daly as Adolpho truly enjoyed his chance to chew up the scenery, and as masterful as it was (it takes real talent to overplay a role with credibility) the sets continued to stay put. As Janet and Bob, Lara Hayhurst and Tom Garruto made an almost too perfect pair, and provided twists to the outrageous plot. As the Drowsy Chaperone, Jerielle Morwitz stole the show with her anthem, “As We Stumble Along” and her many costume changes. As the two Gangsters,Judah Frank and Trey Compton had their patter down to mirror images. Allen Phelps as Feldzieg channeled Nathan Lane.

The music and lyrics by Lisa Lambert and Greg Morrison kept things humming, while the book by Bob Martin and Don McKellerson kept each chapter of the story clear and succinct.

The costumes were sensational utilizing gorgeous, sumptuous fabric with intricate detail by Alyssa Couturier. The many changes were swift and stunning. Even Adolpho’s black cape came in for a round of applause as it swirled 360 degrees during his big number.

The three piece band was tucked neatly in its usual spot stage left, slightly above the audience and barely visible. But the piano, bass and drums produced a big sound that propelled the show forward.

The Theater Barn is located about twenty minutes from Pittsfield and Williamstown in New Lebanon, New York, and continues into September with Stones in His Pocket.

I can not remember when I have enjoyed a show there more than this Drowsy Chaperone, and highly recommend it to anyone who loves musicals. It is simply the sweetest confection of our Berkshire summer.