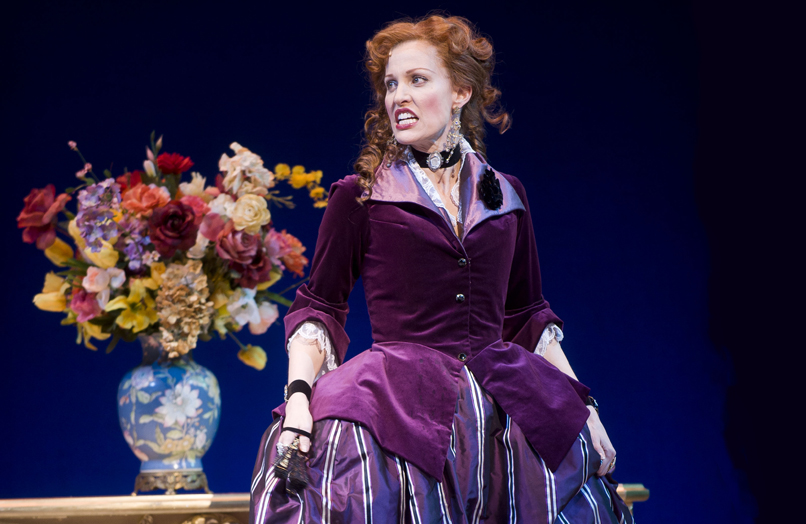 Finally, I am no longer a virgin. For years I have listened jealously to enthusiastic tales of The Game, a musical based on the book Les Liaisons Dangereuses (1782) which had its first airing eight years ago in Sheffield. It was new, original and daring then, and still is. It is just one of the many fine and unusual productions that Barrington Stage Company (BSC) did in rented halls and schools in South County as it established itself in the Berkshires. These successes both inspired and propelled the company to buy its own theatre and move the heart of theatrical activity in the Berkshires to Pittsfield.

Though I had fleetingly read excerpts and condensed versions of the book Les Liaisons Dangereuses, seen and loved the movie, and even seen the play lavishly staged in recent years, the fact that I had not yet seen the musical version was frustrating, an intellectual tease if you will.

Well now I have seen it, and The Game is still fresh and original, and it is has the ability to really suck you in to its story. Its powers of seduction are in no way diminished.

Part of the reason is that it is all new in several important details, most significant its full and glorious staging with new sets and costumes. While looking like a million bucks (and created for far less) Julianne Boyd once again popped the cork and brought this brilliant new musical, bubbling and sparkling, to the stage. For the next few weeks, it will be the toast of the Berkshires as they get to know and hate the beautiful Marquise de Marteuil and the Casanova-like Vicomte de Valmont. The Game is about playing with people’s hearts, people who are not in on The Game, and who follow their hearts instead of their heads. Like watching emotional train wrecks, the exposition on stage enables us to see just how sincere those who are insincere can be. Like some calculating politicians, they will say and do anything to get their vote, and that accomplished, abandon their promises. In The Game it is love that is treated with such callousness.

People of questionable morality and ethics are the ones that all too often succeed it seems, leaving the rest of us behind.

Of course the story does not turn out well for either of the villains. Rather than give you the complete synopsis, let’s just nibble around the edges of the plot so as not to spoil the many surprises embedded into it. With a show based on consummating and thwarting relationships, each person’s enjoyment of this musical will depend on their own personal views on the morality of others. While there is no nudity or profanity in the production, it deals with adult themes, seduction and betrayal.

A frequently used scenery piece is the stylized 18th Century bed that rolls on and off the stage almost as often as the principal actors. But have no fear, there is no chance you will view a nipple, just the suggestions of first and second base groping while clothed. Your imagination has to fill in the rest.

But unlike that musical in Williamstown, there is no need to make up the plot or dialogue by parsing the words of lyrics. Here the proceedings are the same as they were three centuries ago, and just as rich in characters. The gorgeous Rachel York (seen in the lead photo at top of page. Credit Kevin Sprague.) is the Marquise who first proposes the love game to her sometime lover Valmont, played by the versatile Graham Rowat. There seemed to be real chemistry between them on stage but, as it turns out, even that was a game being played by the Marquise. York has the kind of acting chops that can make her soft and sexy one moment, and cold and calculating the next. When she sings the last song of Act One, “Wanting Him More,” it is done with such force and acidity that one is repulsed by its sentiment:

There’s a pair of young lovers in this tale, as well. They are the perfectly cast Cecile (Sarah Stevens) and Danceny (Chris Peluso). The audience can easily warm up to them as the normal young lovers who become collateral damage in the Marquise’s game. All too easily they are turned from innocents to pawns and become players themselves. With their innocence lost, our hopes for them withers. As Cecile’s overly protective mother Madame de Volanges, Christianne Tisdale excels.

As the main target of The Game, Amy Decker as Madame de Tourvel delivers a nuanced performance as she is transformed from a beautiful, but pious woman, into the lover of Valmont, and then cast aside. Also delivering a powerful character, but through understatement and refinement is Joy Franz as Valmont’s aunt, Madame de Rosemonde.

The handsome production under the skillful guidance of Julianne Boyd rarely stopped moving. Even in the mattress-bound bedroom scenes, bodies wriggled, bed linens were tossed about and once the servants even provided illumination and commentary. It is a busy play too with some 23 scenes in its two acts. Working with scenic designer Michael Anania and a top notch crew, there never seemed to be a moment when the story stopped to change a scene. The cast and production crew did its work as both the musical bridges and bits of dialogue covered the change from one scene to the next. In what is becoming a trademark of Boyd’s staging, set pieces remained in place at either end of the proscenium, extending the playing area when needed, and fading into darkness when not.

The music by composer Megan Cavallari consisted of full blown songs and smaller snippets with numerous reprises and rehashes of key leitmotivs. While highly original and workmanlike, some were just about perfect while others were somewhat lightweight. People didn’t leave the theatre humming a new hit. But all the music did its job to advance and underscore the action on stage, and the pit orchestra under the direction of Darren Cohen certainly kept things moving elegantly.

There was no show stopper per se, and the orchestrations while rich and elegant, seemed a bit formulaic, calling to mind many other composers who were working on Broadway a decade ago. Even so, there was a classical music feeling throughout, keeping the show firmly in its time period, though I felt some Disney influence (Cavallari writes music for them). I would need a score and a piano to tease the elements out, but they were mostly ascending musical decorations that kept a downbeat story feeling upbeat.

In any case, from the classical era to this, most composers continue to build on each others musical ideas, to take a musical innovation and advance it to suit their purposes. After centuries, there are still only 88 keys on a piano, but untold billions of possible combinations, and we heard many wonderful new ones last night. And with repeated hearings one or two could become permanently lodged in the memory. Several are likely to become cabaret standards as they find their perfect cabaret artist to make them their trademark.

The book and lyrics by Amy Powers and David Topchik were skillfully blended, with words easily leading from text to song and back again. A personal favorite was “They’re Only Men” sung with just a drop of venom by the once-pure Cecile as she learns the secrets of life from the evil Marquise.

Towards the end of the story, the other once innocent lover, Danceny (Chris Peluso) finds himself in a duel with Valmont (Graham Rowat). Here the swordplay dazzles. The wonderful Ryan Winkles (You may remember him from Shakespeare & Company) acted as the show’s fight choreographer.

Interestingly, there was little dance choreography per se. That’s not to say that there isn’t a good deal of movement employed, just that it is used primarily to add subtle depth to many of the scenes rather than being showy. I liked the delicacy of how the servants lit the bedchamber. It was fun when the costumed characters sashayed out over the orchestra pit using a cleverly incorporated walkway. All the better for onlookers to revel in their decadence and characterizations while enjoying Jennifer Moeller’s extravagant costume choices and Dave Bova’s wigs. In successful productions like this, there are always many unsung heroes behind the scenes.

For me the high point came during the brilliant Tom and Jerry-ish scene when the nobles attend the opera. While not at all a dance number, it worked because of the intricate choreography. In it, the nobility and the stylized opera singers provided the lightest, funniest moment of the whole show, a play within a play, planned down to the smallest detail by Daniel Pelzig and staged by Julianne Boyd.

Les Liaisons Dangereuses does for relationships what Machiavelli’s The Prince does for politics. Both make great reads. But The Game, with its superb cast of actors, colorful sets and costumes, and a seven piece pit orchestra, is even more. Brought to life on stage, The Game exudes a siren call to those who can not resist great literature set on stage in a sweeping, sensual musical. And it may be calling you.