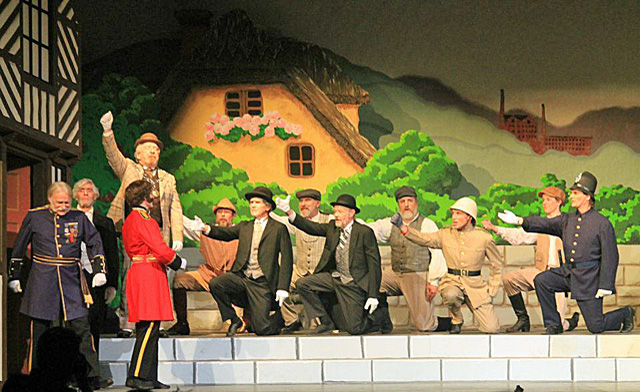 Perhaps the most interesting thing about Valley Light Opera is their dedication and tenacity. Each year a constantly shifting group of community members come together in Amherst to celebrate a different era, this time choosing Gilbert and Sullivan’s The Sorcerer to put on their stage. Since it is a neglected gem and so rarely done these days, it is not to be missed.

One of the tricky things is finding an audience, given that there are no survivors around from the Victorian era when The Sorcerer was created. This observer was impressed by who actually was in the seats. They were young and old, neighbors and visitors, and came from many backgrounds. Exemplary.

Before the show began there was a cleverly staged reminder to turn off cell phones, and another about where the exits were located and the like. Like most theatres, they overlooked saying anything about how annoying the flashing lights and glowing keyboards of other devices can be. So one student was going about his texting while another more senior member of the audience was blithely reading her program with a even brighter flashlight. Ah if only the Victorian manners could seep from the stage to the seats.

Nevertheless, it was a positive experience to see such a wonderful mix of people coming together, unified by the timeless works of W.S. Gilbert and Sir Arthur Sullivan. G & S folks ten to be kindly and thoughtful – they didn’t even mind when the aisles and lobby became narrowed with oblivious seniors and their walkers, like clots in a coronary artery. One of the G & S classics is Patience.

There’s not a lot of G&S performed these days, especially in Western Massachusetts and everyone was just loving the live music. The singers were outstanding, and the orchestra was…well, I could almost weep to hear a live string section again. The richness they provide to the accompaniment is enormous. No synthesizer or digital clone comes close to that shimmering sound.

But a small quibble about the tempo, it might be a bit faster and brighter. Also, for the record, the brass seemed a little “yappy” at times and not as attentive as it could be. To my ear, as the finale began, they sounded – for one awful moment – more like a pack of hounds than a brass ensemble when there was an egregious flub and plotch. But that happens to the best, too. It’s funny how that moment sticks in the memory when for the other 99% of the score they delivered their notes as written, often with remarkable finesse.

The Sorcerer was Gilbert and Sullivan’s third collaboration, and it established a lot of the elements that ultimately became their trademark. You can hear leitmotivs, vamps, and themes that are more fully developed and perfected for H.M.S. Pinafore, The Mikado and Pirates of Penzance.

For this production, the role of The Sorcerer, renamed to Jane Wellington Wells, was played by a woman, the vivacious Heather Davies. Having spent a lot of time in the car with a distaff friend who also loves G & S, I can’t recount the number of times she has treated me to one or another of their patter songs, and we have lamented the fact that they were within parts written for men. Ms. Davies broke the mold, and in so doing gave new life to this amusing form of songwriting. When it came time for her to repeat the lyrics in double time, it was delightful, and she didn’t even have to break into a sweat to finish it.

In The Sorcerer, which is a two act comic opera, there is the usual complicated plot which I will not attempt to unravel here, better to surprise you when you see it. Suffice to say that she conjures up a potion that renders the townspeople unconscious, and upon awakening makes everyone fall in love with the first unmarried person they see. In this updating there were several same sex couples in the mix, and the Sorcerer herself ended up (as G & S intended) with Lady Sangazure (Contralto Kathryn Blaisdell) to hilarious effect.”

Mary Ellen Sailer is delightful Mrs. Partlett, the mother of Constance, a smitten Soprano Elaine Crane who is in love with Dr Daly, the Vicar of Ploverleigh. As the Vicar, Jonathan Evans sang his part with both tenderness and conviction in a remarkably sweet lyric baritone.

Under the direction of Chris Rohmann the VLO company sparkled and shined, as it went through its paces with The Sorcerer. Every part was broadly drawn, the easier to keep track of who was who. From the upper class we have Sir Marmaduke Pointdextre, the role handsomely sung by Matthew Roehrig. His son, Alexis was not quite as surefooted, and was portrayed by tenor Steven Williams. His fiance Aline found a most capable singer in soprano Rebecca Ufema.

Rounding out the principals are the aforementioned Kathy Blaisdell who sang the part of Aline’s mother, Lady Sangazure not only with the dignity the role required, but with a great deal of love, too. Perhaps the most comic role was that of Ebenezer Geezer, the Notary, and it certainly delivered the laughs as Glen Gordon brought the old gent back to life.

The town was peopled by bakers, dress makers, and various other clearly drawn members of the community, and the entire supporting cast did extremely well in making the little community come back to life. Music Director and Conductor Philip Hart Helzer kept things moving nicely, and it was clear that everyone on stage was focused and aware of their cues. With a cast not trained in dancing, choreographer Graham Christian had to keep things simple, and mostly succeeded. But for these eyes, the tableaus were a bit stiff, the movements pretty commonplace. In the battle to get everything ready for the audience, rehearsal time is always in short supply, and good choreography takes a lot of time to both train and rehearse the cast.

The single set by Chris Riddle was simple, with little factories in the distance peeking out from behind the trees with giant smokestacks, an excellent reminder that this was written during the industrial revolution, and before theatrical realism had come into being with Ibsen, Shaw and Chekhov.

The choreography was also truncated by the numerous platforms and risers that were incorporated into the set. It is a classic dilemma, the various levels providing a way to arrange the singers in tiers, the better to see and hear all the participants. Yet the movements on and off stage become trickier, and the choreography becomes extremely limited.

With so much going on in any Gilbert and Sullivan opera, it is unlikely that too many people will see some of these concerns as particularly important. The reason for mentioning them is more as “notes” to think about as the VLO continues to do its splendid work.

The Sorcerer is a delightful trip back in time, and one well worth taking.