Review: A Touching Musical Version of ‘A Wonderful Life’ at Cohoes Music Hall 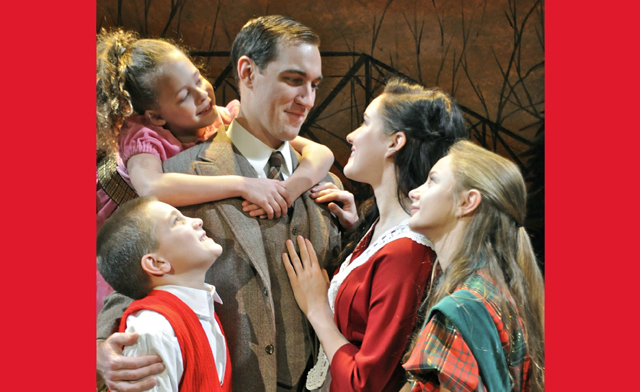 Review: A Touching Musical Version of ‘A Wonderful Life’ at Cohoes Music Hall

Of all the classic Christmas stories, Frank Capra’s A Wonderful Life is the holiday touchstone that best conflates holiday nostalgia with authentic real life situations. The Nutcracker is a bit too sugary, A Christmas Carol typically Victorian, Santaland Diaries is somewhat world weary and sarcastic, but A Wonderful Life hits the Christmas sweet spot perfectly. It has good guys and bad guys, suspense and a happy ending.

Playing at the Cohoes, (NY) Music Hall through December 18, it is the must-see musical of the Christmas season, perfect for families who like celebrating the holiday together. It may deal with grownup themes, but the younger children in the audience were mesmerized by the rapidly changing scenes which were almost cinematic, and the recognizable characters and lively music. For some of the youngsters, it was the first time they saw the Charleston performed live on stage, what fun!

But let’s back up for a moment, for this is a musical with an interesting history.

The black and white film of A Wonderful Life was not much of a hit when it first debuted in 1946. Although it was not the complete box-office failure that today everyone believes. It was initially a major disappointment and confirmed, at least to the studios, that Capra was no longer capable of turning out the populist features that made his films the must-see, money-making events they once were. It was nominated for five Academy Awards, winning none of them. And it never recouped its costs.

But since its copyright was never renewed, it became a holiday classic almost by accident. It was first broadcast on television as an experiment, and now Christmas is not official until we see some version of it this time of year . In hindsight, the film, based on the short story Philip Van Doren Stern’s “The Greatest Gift” was named one of the 100 best American films ever made by the American Film Institute.

The musical version, with book and lyrics by Sheldon Harnick and music by Joe Raposo was almost inevitable but it had a rocky beginning. Controversy arose over the rights to the underlying Stern story that delayed production of the show. With college and regional productions at first, it finally established its roots with the Arena Stage production in Washington, DC with a two month run. That is what you will see at the Cohoes Music Hall, directed by Jerry Christakos, and with choreography by Tony Rivera.

As if anyone needs reminding, this is a truly heartwarming musical. The story closely follows the original plot of the film, set in 1945, telling the story of a suicidal man whose guardian angel reveals to him how different the world, and everyone whose life he has touched, would be had he never been born. It is delivered with marvelous realism, by a cast that works hard and often not only sounds good, but wonderful.

Brad Heikes, who plays the role of George Bailey in Cohoes, is immensely likable, just as Jimmy Stewart was in the movie, but without the magic combination of aw, gee, and silent iron will that the film star so easily portrayed. Of course nobody can hope to duplicate the genius of Jimmy Stewart. But there is an undercurrent of irony in this story, and it is ingrained in the George Bailey character, who should not be played quite so vanilla.

This is especially true in the key scenes with the heavy of the story, Henry Potter, played by John Noble. Noble not only made him the dishonest and menacing millionaire, but earned strong audience applause after his key scene damning George Bailey for not accepting his final offer. Noble is indeed wonderful.

The other standout as evidenced by the audience’s reaction is Kelly Briggs as the bumbling angel Clarence. His portrayal was appropriately earnest, if a bit too fey. Still his enthusiasm was so contagious that the audience was rooting for him to win his wings throughout.

The production itself was, as mentioned earlier, almost cinematic with scene after scene dissolving and changing without losing a beat of the music. The technical crew was at the top of its game, too, with near perfect lighting cues thanks to Matthew J. Flick, and even the follow spot was handled as professionally as I have seen for any production there. Credits go to set designer Christina Williams, production manager Cathy Black, and stage manager Thomas J.Coppola, plus technical ace Jeff West.

The seven piece band in the pit did a fine job, too, under the direction of Brian Victor.

The stage was at a higher elevation than usual so that a turntable could be employed, and it got a lot of use. Jerry Christakos used it not only to move people around and change scenes, but also to move heavy furniture pieces from one side of the stage to the other, making their coming and going more fluid. Though it could have been used as a Busby Berkeley sort of carousel to showcase the actors as mannequins, the choreography often kept the actors moving in complex patterns as it turned, keeping things interesting.

It is almost a decade since founders Jim Charles and Tony Rivera brought the Cohoes Music Hall back to life, and in that time they have hand crafted some 49 full fledged musicals for its stage, all of them of high quality. A Wonderful Life is yet another one of their many successful productions. Merry Christmas!