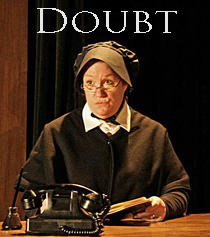 Gail Burns: This marks my first reviewing outing with my friend Abby Turner. Abby is a fellow alumna of Sarah Lawrence College with a background in fine art, design, and merchandising. She has often been my “date” for the theatre and I value her opinions and insight. Abby, what were your impressions of the Berkshire Actors Theatre (BAT) production of John Patrick Shanley’s “Doubt: A Parable”?

Abby Turner: Gail, you are one of the rare people who did not see the film based on this play starring the fabulous Meryl Streep and Philip Seymour Hoffman – so you are coming to this with a fresh eye and I am seeing through the Streep lens – which is hard on any play.

Gail: True. Streep and Hoffman are VERY tough acts to follow! The film was released the same weekend I saw and reviewed “Doubt” for the first time (in a Town Players production in 2008), so I consciously stayed away. But then it is no secret that I NEVER go to the movies anyway.

Abby: The theatre experience is very different, and this production holds up quite well. There is an intimacy and immediacy to the theatre which is very compelling in this play which is so much about character and what one comes to believe. And in the face of a lack of irrefutable proof, beliefs seem about what we know from the pit of our stomach. As Sister Aloysius, Peggy Pharr Wilson is very clear about what her gut tells her. She is a deeply unlikable character, but one of great conviction and integrity.

Gail: Yes, Sister Aloysius IS an unlikeable character, and here Patrick White succeeds in making her nemesis, Father Flynn, her polar opposite – very warm and charismatic. This play is set in 1964 and Shanley intends them not only as characters, but as representations of the new more user-friendly Roman Catholic church that was beginning to emerge after the reforms of the Second Ecumenical Council in 1962 and the old, hard-line church of the mid-20th century.

“Doubt” is set in St. Nicholas Elementary School in the Bronx. (Shanley was born in the Bronx to working-class parents and attended parochial school.) The principal, Sister Aloysius (Wilson) is feeling the pressures of the change fomenting in the outside world in the form of Father Flynn (Patrick White), a new priest assigned to the parish, and of 8th grader George Muller, the school’s first black student. George is assigned to the homeroom of the young, enthusiastic, and innocent Sister James (Clover Bell-Devaney), but it is Father Flynn who takes a special interest in the boy.

Abby: Aloysius comes to believe that Father Flynn has sexually abused George The evidence seemed to me highly suggestive, but not conclusive. Sister Aloysius is out to nail him. When Father Flynn offers an alternate explanation, she is not swayed at all. She calls in Donald’s mother (Ialika Hope) to enlist her on this crusade and is shocked to find that Mrs. Muller wants to leave things alone. She just wants to get her son through this good junior high which to improve his chances of getting into a good high school. She suggests that her son is gay and that this may be an explanation for what has occurred.

Gail: I have a real problem with that scene between Sister Aloysius and Mrs. Muller. I find it impossible to believe that any parent, black or white, in 1964 would cavalierly say to a Roman Catholic nun “I think my son is that way (homosexual)” or that a nun of that era would have heard it without a strong response.

Abby: I agree, if Donald had been gay in 1964, his mother would have been distraught, enraged, or otherwise mega-unaccepting of the fact. This would have been a MAJOR PROBLEM rather than the mitigating factor as presented in the play.

Gail: “Doubt” is a compact play, only 90 minutes with no intermission, and I understand that Shanley couldn’t address all the problems of the world in that time, but that scene just rings so false to me that it almost spoils my whole experience of the play, which is otherwise very well constructed and written – it did win the 2005 Pulitzer Prize for Drama and the Tony Award for Best Play that same year.

Abby: It is a complex and subtle play, and I agree with you that its one flaw is the way that homosexuality is treated. As so often happens, sexual abuse of a boy by a man is often mistaken as a homosexual act rather than opportunistic abuse of the vulnerable.

Gail: Yes, society too often conflates homosexuality and pedophilia, which are NOT the same thing at all. Actually, White’s performance under Brad Berridge’s direction made me consider a possibility that hadn’t occurred to me the first time I saw the play – that Father Flynn is a gay man ahead of his time and has cultivated a relationship with Donald not to seduce him but to help prepare him for what he too will face as he grows up gay in an unaccepting society. That would explain both Father Flynn’s distress at being “caught” – that explanation would not have been accepted or acceptable in the Roman Catholic world of 1964 or even today in 2012 – and his inability to explain himself to his accusers.

Abby: Wilson plays an intelligent, complex, and subtle Sister Aloysius. This is not easy to do because the character is so strident, so brava. The end of the play did, however, make me squirm. Sister Aloysius has a dramatic personal crisis which is played with no holds barred. Certainly this needs to stand in vivid contrast with the level of drama that went before, but to me it felt uncomfortable. Perhaps it would have been less so if White’s Father Flynn had not just had a similar emotional crisis. Also, White’s performance might have been more satisfying to me if Wilson’s had been less. He was not an adequate foil for her. And this is a play in which the antagonists have to be very closely matched. To me they were close, but not close enough.

Maybe another reason this level of emotion at the end felt out of place to me is that up until that point the play had been dealing in euphemisms. No one says that what is alleged to have occurred between Donald and Father Flynn is sexual in nature. This effectively tones down the octave at which it is played. Yes, strong outspoken feelings, but this sudden burst into passion is without precedent. And the crisis deserves to be played at a higher octave, but it felt too raw to me to be right for the text.

Gail: Without giving away the plot to those who have never seen the play or the film, I interpret Sister Aloysisus’s final crisis as being precipitated by the result of her own actions, not by Father Flynn’s . She never doubts her conviction that Father Flynn has cultivated an “inappropriate” relationship with Donald or that she has done the right thing for this one boy in this one situation, but she doubts whether the end result hasn’t done more harm than good.

Abby: I thought the role of Sister James was somewhat lacking in depth.

Gail: Bell-Devaney is cast against type here, which is fine, but I was consistently distressed that I could see her diamond stud earrings twinkling under her bonnet. If you are an actress and you a playing a nun you take your earrings off while you are on stage. That one detail ruined her whole performance for me.

Abby: The role of Mrs. Muller is complex and subtle, but her character is undeveloped, so her lines felt ungrounded to me.

Gail: I liked Hope, but I have already stated my issues with the one scene in which she appears. I don’t think any actress could convince me in that role.

So far we have talked about the play and the performances, but not the production as a whole. This was the most disappointing aspect for me. When BAT launched last season at the New Stage Performing Arts Center, their production was polished and professional in every way. The auditorium of the Berkshire Museum is a shabby space and the lack of professional lighting made it look and feel shabbier. Lighting instruments are very expensive to rent , even more expensive to buy, and there is no hope of borrowing any from another theatre in the summer months, but I wonder if even some colored gels would have made this production look less harsh and cheap.

And sadly the lack of decent lighting detracted from a perfectly nice set by Brian Prather and costumes by Sarah Bertolozzi. Lighting designer Nate Wiessner did the best he could, but three pools of harsh white lights are not adequate equipment. Especially since BAT is trying to run with the big dogs in this second season. Their tickets are $25, but so are the cheapest seats at Barrington Stage!! There is no comparison.

Abby: You know, these flaws certainly exist, but somehow I was okay with them. The play itself and Wilson’s acting were so intelligent and compelling that I enjoyed myself. For me, they largely compensated for the weaknesses, and I found it an engaging evening of theatre.

And at the end I felt less critical than I had earlier. I find it satisfying to look at the ways that a play could have been improved upon. But that doesn’t make it bad. Just good enough to be worth the effort to analyze the flaws. And the play seemed to me good enough to spend an evening viewing. It deserved a much better audience than it had.

Gail: The Berkshire Actors Theatre (BAT) has cultivated a personal relationship with Shanley and is trying to build on their success last season with his 1993 play “Four Dogs and A Bone” to which both Berkshire On Stage Webmaster and lead writer Larry Murray and I gave positive reviews. They are remounting that production this year July 2-15 at the Museum. Bell-Devaney, BAT’s Artistic Director and the producer for “Doubt, has met with Sister Peggy McEntee of the Sisters of Charity in New York, the nun who was Shanley’s first grade teacher and the real-life inspiration for the Sister James character she plays. Sister Peggy will be participating in the post-show talk-back following the 5 pm performance on Sunday, July 1.