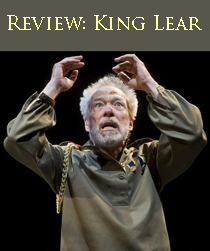 Roseann Cane: This was my perfect night at the theater: a startling, vigorous production of a well-known and very familiar play that challenges my preconceptions.

Gail Burns: Director Rebecca Holderness has set this stunning production of “King Lear” in Russia at the time when the old Tsarist regime was crumbling and revolution was in the air. This sits well with the play’s theme of the relentless usurpation of the older generation by the young.

Roseann: Holderness explains, in her Director’s Note in the program, that she chose to set “King Lear” in 1906 Russia “…in order to recall a time in recent memory when the errors…of a great and passionate ruler led to the demise of a family, an empire, and a way of life.” And so she enhanced my already profound love of this play by revitalizing the archetypal themes, personal and collective. She made me see “King Lear” with new eyes. (That would be a really nasty pun if I’d intended it!)

Gail: This production is all about family – Lear’s royal family and the House of Gloucester. That being said I think Holderness is using an abbreviated version of the play based on the 1623 First Folio edition, which focuses more on the family dynamics and less on politics.

Roseann: All of the elements of the production flowed together seamlessly. Sandra Goldmark’s stark stage, with its suggestion of structure in ladders and beams, shape-shifted from scene to scene as the actors gracefully moved platforms and re-draped pieces of billowing white fabric. To say the actors moved gracefully is a gross understatement, actually. This exquisitely choreographed production, with Peter Bayne and Bill Barclay’s composition (often reminiscent of Philip Glass), Bayne’s sound design, and Matthew Adelson’s lighting is gorgeous and sensual.

Gail: Don’t forget the inimitable Govane Lohbauer’s costumes. She really pulled out all the stops on Goneril and Regan’s wardrobes! Oh those hats and furs! (Yes, there is real fur on stage. That’s how our ancestors kept warm in places like Russia.)

Gail: Lear is such a demanding role that you seldom see an actor as old as the character playing it, which is a real conundrum. You either get the vitality and stamina of an actor who is too young, or the maturity of an appropriately aged actor without the energy. Krausnick has both. He is just wonderful!

Roseann: Jonathan Croy is a wrenching Gloucester. Jonathan Epstein (Kent) navigates with deceptive ease between hilarity and gravity in a masterful performance.

Gail: Speaking of Croy, my heart dropped when I realized that he was playing Gloucester. The scene in which Regan and Cornwall gouge Gloucester’s eyes out has long horrified me, but the idea of seeing that happen to one of my favorite actors was appalling.

Roseann: I will forever remember Holderness for managing to re-create that terrible eye-gouging scene in a way that is less gruesome yet more disturbing. That is one more hallmark of a great director – she honors the intelligence and imagination of her audience.

Gail: Yes the squeamish can relax a bit. The scene is appropriately horrifying but not graphically gory. And Croy’s eyes looked fine at the curtain call.

Roseann: But back to the actors: Ryan Winkles’s nimble Edgar was electrifying, just beautifully realized. Both Corinna May, as Goneril, and Kristin Wold, as the vain Regan, adroitly—dare I say it?—execute performances that are rewardingly horrifying. Kelly Galvin’s solid and smart Cordelia deserves much praise.

Gail: There are only three newcomers in this cast – Peter Macklin as Edmund, James Read as the Duke of Albany and Bill Watson as the Duke of Cornwall – and I notice you have mentioned none of them above. I didn’t like Macklin’s Edmund and one of my immediate reactions when I saw him with Croy and Winkles was “He doesn’t look like one of the family.” Well, Edmund is the bastard son, but literally Croy and Winkles have worked very closely together in recent years and they just easily fit together as father and son.

Roseann: You’re right…I didn’t mention them, perhaps because my connection to their performances wasn’t as strong. Macklin, in my opinion, has been miscast. His performance seemed a bit monotonous. It lacked shading. I liked Read. I felt Watson’s performance was pretty good, but it sometimes lacked dimension and energy.

Gail:I said earlier that this production was all about two families, but really there is a third involved here, the Shakespeare & Company “family” of artists. For the past two seasons we have been seeing various iterations of Shakespeare & Company’s Founding Artistic Director Tina Packer’s life-work “Women of Will.” Krausnick is her husband and a fellow founding member of the company, and he has been working on “The Lear Project” since 1997. He has toured that production nationally and in recent years has been playing Lear in various major productions around the country. Now he is doing so on his home turf, although he admitted in a recent interview in the Albany Times-Union that he disagreed with some of Holderness’ directorial choices. As an actor, have you ever played the same role in different stagings of a play? I would imagine that is very challenging, but, as Krausnick was quoted as saying, “The Shakespeare text just keeps yielding more and more levels of resonance and meaning.”

Roseann: I need to read that article! I’ve never played the same role in different stagings, but I’ve been in plays where new actors replace actors I’ve become accustomed to working with. It’s ultimately very exhilarating. Often non-theater people assume eight shows a week of the same play would be tedious for an actor, but it’s quite the contrary, in my experience. And as Krausnick brilliantly plays a character of such extraordinary depth and breadth, I imagine there’s always more for him to discover.

Gail: Another theatrical family connection in this cast includes Kevin G. Coleman, reprising his role as Lear’s Fool, which he played so beautifully in Tina Packer’s very different 2003 production in the Founders’ Theatre starring Jonathan Epstein, who, as you mentioned, also appears in this production as Kent. I know Coleman is another founding member of the company, as is Croy, and Epstein may be one too. To see Coleman, Krausnick, Epstein and Croy together on stage with newer/younger company stalwarts like Winkles, Wold, and Galvin was just tremendously moving to me and also resonated with the play’s theme of the passing of the torch from generation to generation.
I’m getting verklempt just writing about it…

Roseann: Oh, I wish I’d seen Coleman’s 2003 performance! He was wonderful in this one. Your observation about the Shakespeare & Company family connection is lovely. It adds a level of intimacy in the relationship between the audience and the actors, too…

Gail: Although I love Shakespeare and have always had an affinity for his language, I confess that before opening night I fell into the typical trap of dreading the length and density of “King Lear” while forgetting what a GREAT story this is and how powerfully it is told. I did get Fanny Fatigue somewhere in the middle of Hour #3, but otherwise this show had me on the riveted to the stage and oblivious of the time. I urge our readers not to make my mistake. This is a fast-paced and exciting production which is completely accessible to a modern audience and I think it would be an especially good introduction to Shakespeare for teenagers.

Roseann Cane is an actress and director based in Columbia County. She also has many years’ experience as a writer and editor.

Gail Burns is a veteran critic of the Berkshire Theatre Scene in both the print medium and her own website, GailSez.org

GailSez “Women of Will” Reviews