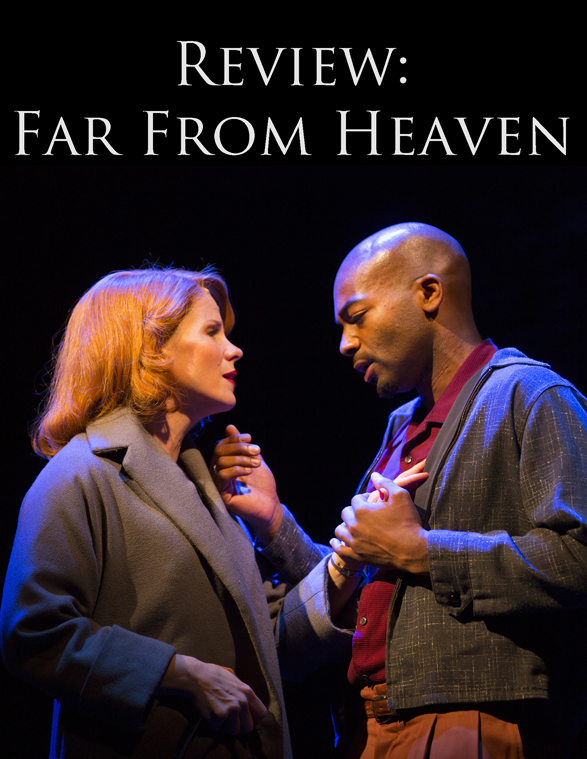 Review: Far From Heaven, a New Musical Heading to Broadway from the Williamstown Theatre Festival
by Larry Murray

Update 5/2013: Now at Playwright’s Horizons and directed by Tony nominee Michael Greif (Grey Gardens, Rent, Next to Normal), Far from Heaven began previews May 8 and sold-out its original engagement through June 30, 2013. An additional week of performances has now been added through July 7. Far From Heaven officially opens June 2, 2013.

The sweep of the new musical Far From Heaven is daunting, since it is as much a sociological statement with music and acting as it is a fully formed evening’s entertainment. As such, it picks at the scars left over from the post WWII Eisenhower era, offering tempting insights into what life was really like in the time celebrated by the television series Mad Men. On the surface it was “Morning in America”, as the promise of America was being realized for many, but it was also a terrible time if you chose to think for yourself and not conform.

The musical reopens wounds for the gay men who actually came of age around 1957, and the women some may have married. Like me, they may find Far From Heaven a painful musical to watch, because it recaptures those times so accurately. Oddly enough, the musical’s depictions of 1950’s life are realistic and honest, capturing the artifice perfectly. It was a time when personal authenticity was at its lowest. People behaved as others expected them to, and did not live for themselves, but for some imagined ideal.

Far From Heaven could bring back the excruciating memories for some, while others might wish for a return to the days when homosexuality – the fulcrum upon which the whole story rests – was called “The love that dare not speak its name.”

Though there were no signs saying “white” and “colored” in New England, there was de facto segregation going on right into the 1960’s. For people whose view of color is not limited to one shade, this musical is set in a time that is not particularly uplifting either. Two of the main characters in the musical are Sybil (Quincy Tyler Bernstine) as the housekeeper/nanny and Raymond Deagon, the gardener (Brandon Victor Dixon). As an audience we see them as fully human, caring people, while some of the white folks on stage talk about them as if they were not there. This is not fictional, but another indictment of a noxious society.

Far From Heaven begins as the movie does, with the brightly colored leaves of Fall swirling around the feet of Cathy Whitaker (Kelli O’Hara) as she balances two huge grocery bags, shooing her children into the house. Cathy and her husband Frank (Steven Pasquale) have two youngsters, David (Charlie Plummer) and Janice (Alexa Nizak). The youngsters don’t even know it, but they are America’s future baby boomers, born in the halcyon postwar years following WWII and the truce of the Korean War.

Those leaves, so normal and colorful are also a metaphor for the story to come, for Whitaker’s life is about to caught up in a maelstrom of emotional tangles, as her husband – a closet case – is discovered kissing another man. This has emotional repercussions which are deeply buried and a shrink is called in. About this time she strikes up a friendship with the gardener which evolves into an all too common late 1950’s race-mixing scandal.

Far From Heaven describes the superficially perfect life of a husband and wife from the “Greatest Generation,” the one that won WWII and then – taking the assembly line and mass production skills they had devised to make tanks and planes – turned them into cookie-cutter Levittown’s. Arriving with the new affluence was that curse on American individuality, the suburban lifestyle. Far From Heaven takes place near Hartford, with the town of Wethersfield and others growing rapidly as the core city began to decline. Its opening song, “Autumn in Connecticut” is a lovely scene setter. The meeting with the decorator finds Cathy singing “You Like?”. (Not so much.) Cathy and Frank sing “Secrets” without really revealing anything. Real issues were sidestepped, honest talk virtually impossible then, and in some places still are today.

While superficially affluent and progressive, these Republican towns thrived on a strict social order run by straight (and sometimes closeted gay) white males.

It’s a very racist, sexist, homophobic time, and poor Cathy Whitaker is about to find out just how tough it is when you run into problems in any of these areas: her husband ultimately leaves her, her gardener friend gets harassed, his daughter attacked and hospitalized, and decides to move to Baltimore. Raymond’s own peers disapproved of his fraternizing with a white woman. Finally opening up to a best friend, Cathy discovers the friendship is superficial as her best friend abandons her because she does not “approve” of the idea of Cathy joining the NAACP or being friendly with a black man.

All this makes for a pretty depressing musical for people like me who ran from these suffocating suburban hellholes the minute the opportunity presented itself. We went to urban places where different people and ideas were not seen as threats, but as diversity.

I saw Far From Heaven in this, its final weekend of “preview” performances at the Williamstown Theatre Festival, which allowed changes to be made in the past two weeks as the show has evolved. Asking around there appeared to be little modification, and the song list and order remained unchanged in the program. Comments made in other reviews still seemed to apply. The show may undergo changes but they will happen between its closing and reopening in the Spring on Broadway.

The book of the show by Richard Greenberg is pretty faithful to the 2002 film which was written and directed by Todd Haynes. Even the lyrics of the songs by Michael Korie reflect the same aesthetic as the film, at least in the first act. In the second half of the show, I finally was able to connect with the characters. They finally had some self-awareness that it wasn’t “them” that were the problem, but all those narrow minded bigots and busy-bodies who bullied the whole damned town. “Rumors” which opened the latter half cleverly showed the gossipers at work as the Whitaker’s went about their business.

The second act added some detail about Frank’s sexual preference and continuing relationship with his wife.

Frank and Cathy take some time off to “bond” and “heal” traveling to Florida following his psychiatric counseling. The location shifts to a South Beach nightclub where the Latin crooner sings “Wandering Eyes”. Of course as he does so, Frank makes eye contact with another guy. This would be where – in a musical not bound to a film – an upbeat and funny song and dance number would be inserted. But no, the creators stayed true to the moribund and depressing 50’s so there was none of that. Of course those of us who lived through the time knew there were the little hidden clubs – Boston’s “Cha Cha Palace” on Charles Street comes to mind – where indeed wandering eyes was played out, alternating with vice squad raids. In fact today the old cha cha is now the very room in which Shear Madness has been playing for decades.

The music by Scott Frankel was easy on the ears, elegant and varied, but without a show stopper. Far From Heaven has much of the same team as the musical Grey Gardens, and like that show its pleasures are more subtle than bombastic, more Adam Guettel and Light on the Piazza than Jerry Herman and La Cage aux Folles. While far from bland, it is nevertheless, safe music. It won’t ruffle any feathers.

The orchestra under the direction of Lawrence Yurman was first class, with expert brass players which are not easy to find in these parts. The ensemble sound was smooth and tight, and made a nice alternative to the Elmer Bernstein score of the movie.

Kelli O’Hara was just phenomenal as Cathy Whitaker, and this is her show, her story, one that is rarely told in tales about closeted husbands. Kelli as Cathy does everything right, which means looking sensational at all times, being the Rock of Gibraltar even as his world crumbles underneath her, and smiling and being upbeat to all the nasty people she encounters. O’Hara is so solid in her portrayal that if she were in character out on the street and got caught in a downpour, not a drop would stick to her, she wouldn’t even get damp.

Her character does have a bit of a Stepford Wives component to it. Cathy only allows the smallest amount of petulance and impatience to show through as in her song “Tuesdays, Thursdays” where she reminds her husband for the umpteenth time the days she car pools. He never, ever, could remember.

The musical is also about the struggle of Frank Whitaker and his attraction to other men, but his “problem” is appropriately secondary to Cathy’s struggle in this musical. We have seen many tales of married men coming to grips with their homosexuality, and in the 1950’s this was usually solved in films when the Hollywood “Code” required such men to end up committing suicide or going to jail. Now it is time to look more deeply, at the other people that were affected in the process, finding their marriage was based on a lie. Can that ever be justified, can we blame the pressures brought about by the media, the religious and community leaders?

In the late 50’s the American dream was a culturally enforced one: to get married by age 21, to have 2.5 kids, to move to the suburbs and to have a beautiful wife and a Chevy Station Wagon which would be used to shuttle the kids and drive hubby to the commuter rail. The only alternative was to be a blue collar craftsman but even they were expected to stay in the background when the real “men” were present. With the road to jobs and success paved with a wife, and almost no mention of gay men in any of the media, many gay men got married, seeing it as the only choice.

Far From Heaven explores this theme side by side with that of racism. Like the movie it barely gets beneath the surface of these subjects, choosing instead to simply recreate the times, not comment on them, and then let the audience make its own mind up. This is a different approach than usually taken. whether it will resonate with audiences and have sufficient “legs” for a long Broadway run remains to be seen.

If I wanted to relive those painful times, I suppose Far From Heaven would be the perfect way to do that. But to tell you the truth, I have been trying, for a lifetime, to forget them.