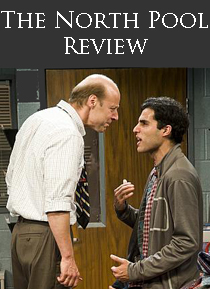 The North Pool begins simply enough, with a transfer student from the Middle East being called into the Vice Principal’s office for a friendly chat. Dr. Danielson (Remi Sandri) asks a few seemingly routine questions of the new student Khadim (Babak Tafti). “How’s everything, how are you liking Sheffield High?” to which Khadim answers in turn.

As the questions grow more specific, the audience begins to suspect that something more than a friendly welcome is underway. And they are right, it is the beginning of an hour long interrogation which quickly becomes a cat and mouse game as the vice principal corners the student in lie after lie. At first they are white lies, but as the story unfolds, the stakes escalate and we find ourselves in the middle of a good old fashioned psychological drama.

The North Pool comes from the pen – or is it the keyboard – of playwright Rajiv Joseph, author of the play Bengal Tiger at the Baghdad Zoo, a 2010 finalist for the Pulitzer Prize.  The story is artfully constructed to build on itself with ever higher stakes as the questions and answers fold into each other in ever increasing importance. Before long the audience which arrived relaxed and ready for an entertaining story found themselves sitting on the edge of their seats, the better to search for clues, to observe every blink, every action of the two opponents.

Rajiv Joseph brilliantly captures the ease with which people deceive each other, sometimes to avoid extended discussions, and at others to simply keep a dimension of their life private, or an embarrassing episode secret. Not until the last fifteen minutes of the play do we even suspect that what we are watching has only been the preliminaries, and we get to the real agenda, the one that surprisingly and momentarily unites the two protagonists.

As Dr. Danielson, Remi Sandri is perfectly cast. The Vice Principal is tall, balding and full of Idiosyncratic tics that would cause you to cross him off any guest list. He is, his character says, “a numbers kind of guy.” And it seems that every time Khadim tells a white lie, Dr. Danielson pulls out a piece of paper to counter it. Danielson begins his role predictably enough, to the point where you might wonder if he was an actor, or actually a school administrator. His characterization is not revealed all at once, but in layers. He lays in wait with his facts and figures tucked in various drawers of his desk.

Into his trap comes the seemingly innocuous Khadim, who is from a wealthy Middle Eastern family that runs a shipping company, and the teenager has the confidence of a merchant in an souk. It is only after repeated episodes of being caught fabricating stories that he begins to become alarmed at the direction the questioning is headed.

Babak Tafti who plays Khadim delivers a well calculated performance that builds in intensity from the initial encounter with the Vice Principal, to mounting anxiety, and then panic as the story moves forward. He is a cold and calculating character when it comes to money, though in other areas he has soft spots. Initially controlled and confident, growing uncertainty begins to be heard in his voice and seen on his face as the play moves through its development into its central contest.

There are secrets here, and as the onion is peeled the story takes unexpected twists and turns, keeping the mind engaged. And best of all, always surprised.

The direction by Giovanna Sardelli who has worked on a number of Rajiv Joseph’s plays, was spare and purposeful. Little touches, like no chair beside the school administrator’s desk, and the constant circling of the two combatants reminded one of wolves assessing their prey, looking for an opening. In any school story the mere touching of a student sends up immediate alarms, and here the director went for maximum impact. Small details, like whether the touch was with an open palm or closed fist did not escape her notice.

The stage setting, as with most of Brian Prather’s work was detailed, authentic and believable. The lighting by Clifton taylor employed standard schoolhouse fluorescents albeit with warmer bulbs than normal, supplemented by regular stage lighting. The result is that not only could you hear every word in the theatre, you could see every detail, too, and didn’t need perfect sight and hearing to accomplish this. It seems the audience is very much in everyone’s mind when they mount their shows, a detail that I am always grateful for.

With The North Pool, Julianne Boyd, the Barrington Stage Artistic Director, has once again picked wisely and well. The North Pool is part of the company’s New Works Initiative, bringing new playwrights and attentive audiences together. Boyd says that as important as new works are, that undertaking East Coast productions for earlier successes on the West Coast helps encourage their national exposure. Boyd’s track record of mostly sold out shows on the St. Germain Stage shows that she knows her audiences love a good story, and if it comes with some elements plucked out of today’s news, so much the better.

If you are a fan of Agatha Christie mysteries, with maybe a David Fincher edge, and Alfred Hitchcock simplicity, then The North Pool is for you. The North Pool is a cat and mouse game both on stage and with the audience. Even as you think you’ve figured out what the next zig is going to be, the whole story zags, staying one step ahead of your expectations. And that is the greatest fun of all for me.

So, why do you think an Arab student might be called into the School Office? No spoilers here. You’ll just have to see it for yourself to discover the answers. And please, keep the ending to yourself, it’s more fun that way.