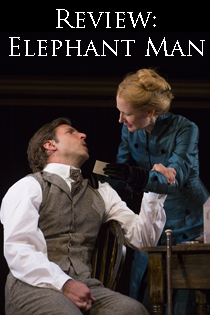 (Update 5/20/15: Bradley Cooper and Elephant Man is now playing at Theatre Royal Haymarket, London, for a 12 week season from 19 May until 8 August. Reports from the first night indicate the production received a standing ovation and Cooper is being besieged by fans whenever he is spotted.

Back in 2012 we also published an extensive interview with Bradley Cooper on his approach to The Elephant Man, and background about John Merrick and the play itself. You can read it here.)

The Elephant Man is the best play of the summer (so far) and it’s a shame, really, that more people won’t get to see it since it has but a short run in a small theatre, and tickets have been pretty much sold out for weeks. (There is a lottery 2.5 hours before each performance for a few tickets and standing room.) Written by Bernard Pomerance and having won three Tony Awards including Best Play in its original Broadway incarnation in 1979, it played for two years and has been made into a film, television special and had several noteworthy revivals on Broadway and in London since.

As directed by Scott Ellis The Elephant Man is the kind of play that turns first time theatre-goers into subscribers. In fact, it is the subscribers to the WTF who snapped up most of tickets months before the box office opened in June.

Of course the actors in this production are a draw in and of themselves. Bradley Cooper goes against type to portray The Elephant Man, one of most disfigured people in history. He lived from 1862 to 1890, the last four years in a hospital under the care of surgeon Frederick Treves. Most of what we know about him is based, like the play, on the memoirs of Treves which calls him by the name of John Merrick while he signed his letters Joseph. Just what disease Merrick suffered from is still the subject of conjecture today, recent DNA tests on his hair, bones and relatives being inconclusive.

The playwright specified that no special makeup or prosthesis be used to portray Merrick, but advised actors with back problems not to undertake the role. When the performance begins and we first see Merrick, Bradley Cooper stands tall, unaffected. A slide show with images of the actual Merrick are displayed and as each growth and disfigurement is described, Cooper’s stance changes to reflect the malady. Within just minutes the actor becomes, and then maintains, his character. As he incorporated the afflictions of the Elephant Man into his own body, he captivated the opening night audience. Merrick could only speak slowly, but immediately showed his listeners that he was an intelligent and exemplary human being regardless of the burdens he had to carry physically.

Having survived as a freak on display in PT Barnum type sideshows, Merrick found himself abandoned and unable to speak on a railway station platform when the card of Frederick Treves (Alessandro Novola) was found in his pocket. The surgeon rescued him, and the play really covers the last four years of his life, in a hospital under the doctor’s care. It ends with his death, which raises the question of whether it was accidental or suicide, and whether the good doctor Treves was caring for him, or using him.

As Treves, Novolo walked a fine line between the cold objectivity of a doctor, and the warmer, caring individual who protected Merrick from exploitation as a freak. But Treves also put Merrick on display, albeit as a medical curiosity and in his efforts to introduce him to a more normal life, brings in the actress Mrs. Kendal (Patricia Clarkson) who was the only actor on the Nikos stage that could manage to eclipse the brilliance of Cooper. Clarkson, sometimes through understatement, or through a regal bearing, or by even baring her breasts, delivered the sweet antidote to the bitter life Merrick had led. To watch Cooper and Clarkson work together has to be one of the great moments of the storied Williamstown Theatre Festival. During their scenes you could hear a program drop in the audience (Yes one did during the moment the audience was riveted on Clarkson unbottoning her dress) but the coughing stopped, the fidgeting came to a halt and those of us in the audience almost breathed in unison during their scenes together. They were that magical.

The cast of fifteen was often exemplary and – with the exception of Cooper, Clarkson, Nivola and the orderly (Michael Ruocco) – all doubled in other roles to fill out all the characters, and did it with great professionalism. The only problem is that at times some of the minor actors were hard to discern, with varying accents and delivery the indecipherable equivalent of someone speaking in tongues. They appeared to be fine actors otherwise. It is hard to tell if the cause was too little or too much time with the vocal coach Shane Ann Younts. One of the continuing problems with affecting English, Scottish and Irish accents in plays is that the results still vary all over the lot, regardless of the coaching. I often wonder what harm would come from just speaking the words as they are written, without troublesome accents.

With just under two dozen scenes, The Elephant Man moves its story along almost cinematically, accomplishing the effect of filmic “dissolves” on stage as the choreographic dance of changing locations was accomplished so smoothly they felt organic.

The mesmerizing aspect of this Elephant Man owes as much to the production team as to the actors. The brilliance of their work on the swiftly changing set (Timothy R. Mackabee), costumes (Clint Ramos), music (composed by Tom Kochan) and all the elements that go into making a play was simply marvelous. And of the technical people, a special round of applause is deserved by Philip S. Rosenberg who designed the lighting. Dozens of instruments were specially placed to cast the light on Cooper as he played The Elephant Man, to distort his features and emphasize his oddness. We all know the effect of holding a flashlight under our chin can have at halloween, and in the case of the lighting design the same effect, a bit more subtle, was accomplished by the tightly focused overhead spots.

When all these elements come together as they are doing now in the Nikos Theatre, the story on stage becomes real, the actors transform themselves into the characters they are playing, and the result on stage is an escape into another time and place. In the end, I came away with the unusual impression that Merrick and Mrs.Kendal were the most normal individuals on that stage, the others being failed human beings in one way or another. The play then was as much about the duplicitous folly of “normal” people as it was about the odd appearance of “freaks”.

‘Tis true my form is something odd,
But blaming me is blaming God;
Could I create myself anew
I would not fail in pleasing you.

If I could reach from pole to pole
Or grasp the ocean with a span,
I would be measured by the soul;
The mind’s the standard of the man.

—poem used by Joseph Merrick to end his letters