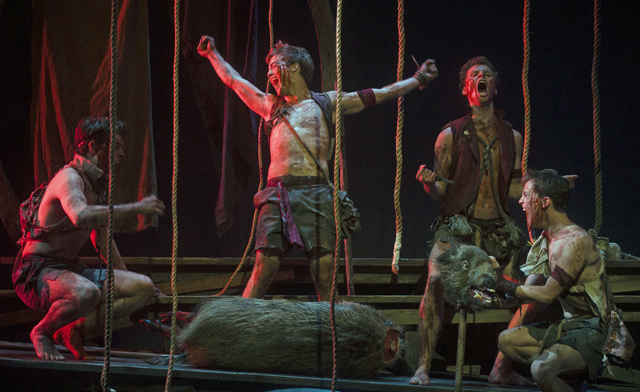 Bringing a Classic to Life

It’s a lot easier to read Lord of the Flies than it is to see it acted out on stage. When you go, you will find moments of the current production so realistic and horrifying that you may have to resist the urge to flee. Having such a visceral reaction to a play is not a common complaint. It proves the staging of this classic book has done its job, it is simply brilliant. If you have not read the book, be prepared to have your expectations for a fun evening of theatre turned upside down during the course of this two part-two hour play.

Things start badly enough when a plane full of schoolboys crashes onto a deserted island and only the boys survive. We first meet the affable Ralph (Richard Dent) and common-sense Piggy (Matthew Minor) whose first thought turns to finding the other survivors, and hopefully an adult to help tell them what to do. With a conch shell Ralph manages to summon the others who arrive on stage in their school blazers singing a hymn.

But these choir boys are soon to turn murderous as their prefect, Jack (John Evans Reese) takes control of the majority of the lads. First they almost burn the island to the ground trying to set a signal fire for passing ships and then they are off to hunt a wild boar. Over time, the group dissolves into two warring groups, and as they hype themselves up over a mythical beast in the jungle, Simon, the philosophical boy (Chris Dwan) dies at their hands as fear and blind rage overtakes reason and civility. All of this happens in the first act, so this is just the gist of this unsettling story. It gets more cruel and horrid in Act Two which raises the feelings of “fight or flight” for a second time.

When you look at the images of the cast of ten boys and young men in the program, you nod approvingly, they are all clean-cut, attractive boy-next-door types, destined one hopes for the best things in life. Their arrival as a cohesive singing unit reinforces their camaraderie. In a play that is chock full of metaphors, the first one is that since Jack is the prefect of the choir, he is therefore the highest ranking and should be their leader. After locking horns with the more reasonable Ralph, he uses fear and posturing to rev up the other boys so that they reject the logical leader, and follow him instead. Politics 101.

As Jack Merridew, John Evans Reese keeps things whipped up, his character is in constant overdrive and his cohorts – like Will Bradley’s Roger – are intent on pleasing – and following – him. Jack turns out to be a sadist, a bully, someone who is both psychotic and power hungry, yet in the end he folds back into his original character to please the rescuers. But the malevolence he displays is always buried there, the innocence of youth being just a pose. You realize this from Reese’s brilliant interpretation of Jack. Actors often internalize their characters to play them convincingly, so it must tear him apart inside when assuming this role.

Richard Dent is equally adept at portraying Ralph, who ends up leading a smaller faction of younger boys and provides shelter and food for them. They build and maintain a fire through natural adversity, only to have both destroyed by the other boys. In the process Matthew Minor’s Piggy has his glasses taken, leaving him helpless. The scenes in which he is essentially blinded are among his most convincing, but his fall from the cliff is a moment to remember, and shudder over.

Three local actors also made quite an impression. Joey LaBrasca (Percival), John Aramis Buckley (Eric) and Dane Shiner (Sam) played smaller, but pivotal roles as the younger boys following Ralph. Also impressive were Eric Myers as Henry and Christopher Sears as Maurice, a role that is great training for a run at playing Tybalt in Romeo and Juliet.

Leading this brooding band of boys on their literary journey is director Giovanna Sardelli who came to Lord of the Flies as a bit of a newbie, but cast the roles well and then shaped them into an acting ensemble that was almost constantly on the move. She might have paid a bit more attention to some of the dialogue as many important lines were almost thrown away, especially the one about “the beast” being inside of each of us. The beauty of prose on stage is that key concepts can be given subtle but effective emphasis. However, the pendulum was ticking away madly most of the time, and with an original soundtrack that kept the play moving forward, there was a need to never fall behind.

The Soundscape by Anthony Mattana

Most every play these days has a sound design credit, often for a couple of phones ringing or music to set the mood. This Lord of the Flies has one of the most exceptional soundscapes ever devised for a local production. Created by Anthony Mattana, it set the mood from the moment you entered the theatre to when you left. The score, in seventeen tracks, is diverse, creative and highly effective. I urge you to click on a few of the tracks to see how dramatic theatre has become these days, and to appreciate Mr. Mattana’s contribution to the whole.

In a production that has so much fighting and crowd movements, choreography is essential to both its realism and to assure that nobody is actually hurt with all the pushing, shoving and jousting that occurs. As the fight choreographer, Felix Ivanov infused his key scenes with a wonderful blend of realism and impressionism. Some of the action was for real, while slow motion, stylized action and silhouettes captured the bloody outcome for the audience. And 90% of them read well from the audience, a remarkable achievement where I rarely find more than half the fight action on stage sufficiently believable. Too often fight scenes are slowed down with obvious preparation rather than flowing organically. Fast action equals believability. But where needed, slow motion and shadows can emphasize the damage being done. Ivanov prepared these marvelous young actors well.

A credit is also given to Assistant Director Shakina Nayfack who had to keep track of everything happening on stage at all times, while also acting as the company’s movement coach so that everyone was in sync character wise. Dialect Coach Stephen Gabis worked wonders with this diverse cast, helping them achieve a uniformity of British accents that impressed, perhaps because the younger actors are not yet set in their ways, and are still sponges absorbing the intricate details required for a uniform sound. I am sure many of the actors worked hard on their lines, so this is noteworthy, and credit must be given.

Likewise Amy Clark was able to render schoolboy clothing in both its pristine state, and after it had been ravaged. When the second act opened, it was like tuning into Survivor on some remote island after months with only one set of clothes. Truly a riches to rags story, and a costume designers dream to play with.

The scenic design by David M. Barber and lighting components by the always reliable Scott Pinkney, are intricately linked. Their cumulative effect a study in abstract impressionism. What appeared to be a random pile of lumber strewn in piles across the stage was supplemented by manmade remnants suggesting a crashed plane, and ropes galore drifting down from the flies as trees and vines. The ghastly remains of a parachute and corpse became the “beast” the younger members of the tribe tried to describe to the older boys, and which the tormented Maurice tried to explain to the others was “just a corpse” even as he became one himself.

With ladder-like scaffolds and ramps, the set became the mountaintop, the encampments, the jungle, whatever was needed. Director of Production Jeff Roudabush must have had his hands full making a thousand small adjustments for the action, and during each performance making sure the smoke and fire effects go off without a hitch.

The play is based on William Golding’s book and was adapted by Nigel Williams in 1995 for the Royal Shakespeare Company. It has been performed in the US a handful of times, but casting and production are incredibly difficult talks, while selling tickets to the general public is not always easy. Too many identify it with high school and dismiss it for that reason. That is a grievous mistake.

While the play itself could be dismissed as a bunch of boys going wild and running out of control for two hours, that is exactly the point. Consider for a moment the leaders and why they are chosen, and the fantasy of the “beast” (fear of the “other”) is achieved by stoking people’s natural paranoia. Here among the inexperienced and immature they are led into destructive behavior. So when it comes to why we as humans seem to all too often end up aiding and abetting tyrants, liars and thieves, this play has a very great deal to say. The parallels to present day school bullies, and political fear mongering are numerous and those who participate in it often find themselves in denial that they are responsible. The banality of evil is evident in all the history books if you look hard enough. From Jesus on the cross to Jewish genocide in Germany, it is the simple, ordinary people who do the horrible deeds.

In the end Lord of the Flies is far from a day at the beach, or a glimpse of paradise. Rather it is a repulsive, chilling look at human nature at its worst, a parable about how wars are begun and waged, and the foolishness of it all. William Golding (September 19, 1911 – June 19 1993) was awarded the Nobel Prize in 1983, and many were outraged.He was chosen over Graham Greene and Anthony Burgess, less upsetting and more sopisticated observers of the human condition. Many have tried to ban his book because it undermines the wisdom of war, the belief that most people are intrinsically good. What changed Golding’s mind was his Naval tour of duty in which he participated in the sinking of the Bismarck and the invasion of Normandy.

He became a bit of a pessimist after that, and exorcised some of his demons in Lord of the Flies, letting flow his unsuccessful struggle against barbarism and war, thus showing the moral ambiguity and fragility of civilization. It is not an easy play to watch, but it is an important one. Because of the action and bickering that goes along with the bullying and brutality, younger audiences become enthralled,and lessons are learned.

In her pre-curtain speech, Julianne Boyd, artistic director of Barrington Stage Company announced that some 2,500 students would see this production at special matinees during its run. For others of us, this would be a superb opportunity to invite any young people we know (teens and above – younger ones might have nightmares) to the theatre for a first rate experience. Freddy Kreuger and Jason are not nearly as scary as these schoolboys when they allow their self-wills to run riot on a deserted island.

Despite its savagery, Lord of the Flies is a theatrical triumph that we will be referring to for years to come. The risks of taking on such a powerful play are many, and Barrington Stage has delivered a night at the theatre that will not be easily forgotten.