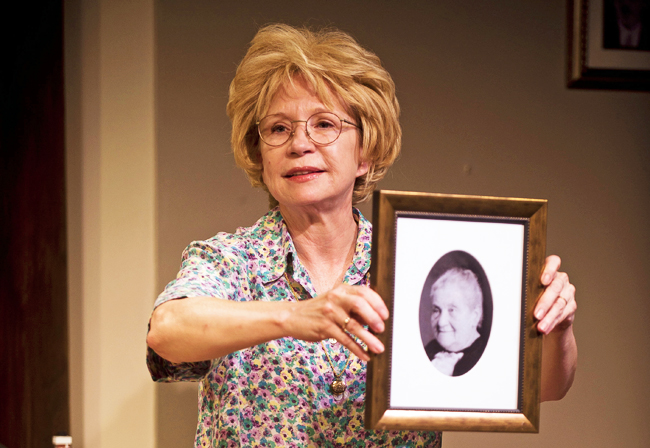 It is amazing what some judicious pruning, a few new lines and enough time to find its ideal level can do for a new show. So it is with Mark St.Germain’s Dr. Ruth, All the Way tautly directed by Julianne Boyd, which has returned for a second run at Barrington Stage Company.

The slightly revised play is tighter, funnier and more inspirational than the Dr. Ruth we saw in June, and as Gail Burns said in the Burns and Murray review back then, “It is about a woman’s life. In these dark days for American Women’s Rights, I think a story like Dr. Ruth’s – of one woman achieving her goals and making a difference – needs to be shouted from the rooftops. No one is going to silence her! I loved the moment late in the play when we see the photograph of Dr. Ruth’s four beautiful grandchildren and St. Germain had her say: This is Michal, Leora, Benjamin and Ari. My grandchildren. When I look at them, I know Hitler lost, and I won.”

It was then, and is now, one damn fine show. Only now, in its second iteration, it is even better. Gone is a lot of the phone chatter with the movers and Pierre, her minister of communication which tended to focus on others. Enhanced is the time and attention to Dr. Ruth Westheimer herself, and the people she has interacted with during her exceptional life.

Seeing the same show twice is not something I do often anymore, though it always enables me to see things I missed the first time around. In live theatre, no two performances are identical in any case as an audience’s reaction can have a marked effect on the ultimate “feeling” of a show. Sometimes you get more of the laughs, other times the underlying structure becomes more visible. In this case, there were both more moments of shared humor and a clearer insight into the philosophical underpinnings of Dr.Ruth herself.

Dr. Ruth was present for the official reopening, just as she was for the earlier premiere. I had a few moments to chat with her again between acts, and she noted that this was the eighth performance she has attended. I bet she could understudy her own role,too, if the need arose.

At the premiere she sat a few seats from me and I would glance at her reaction to what was happening on stage; her gaze was intense and she would lean forward, into the action, when Debra Jo Rupp got to key passages about her husband, her family and her grandchildren.

Perhaps that is why the passages about those same things seemed to ring out more loudly at today’s performance. As a result there is a single message to this play that only came to me the second time around. She has lived her life for: her family, both the one she lost to the Nazis and the one she created with her beloved husband Fred.

So yes, the plays touching words by Mark St.Germain, the focused direction of Julianne Boyd, the brilliant one actor tour-de-force by Debra Jo Rupp and the brilliant crew that makes it happen all deserve high praise for a wonderful show, superbly done.

But in the end I find it is Dr. Ruth who is in my heart. Now 84 by my calculations, she has overcome adversity, accomplished much, made the world a better place, and never, ever forgotten that in the end what gives life meaning is those nearest to us.

Dr.Ruth, All the Way runs from June 19-July 21 on the St. Germain Stage of Barrington Stage Company. For tickets call 413-236-8888 or click www.barringtonstageco.org Running time about two hours plus one intermission.